Eli adds drama to Eagles' quest to run the table 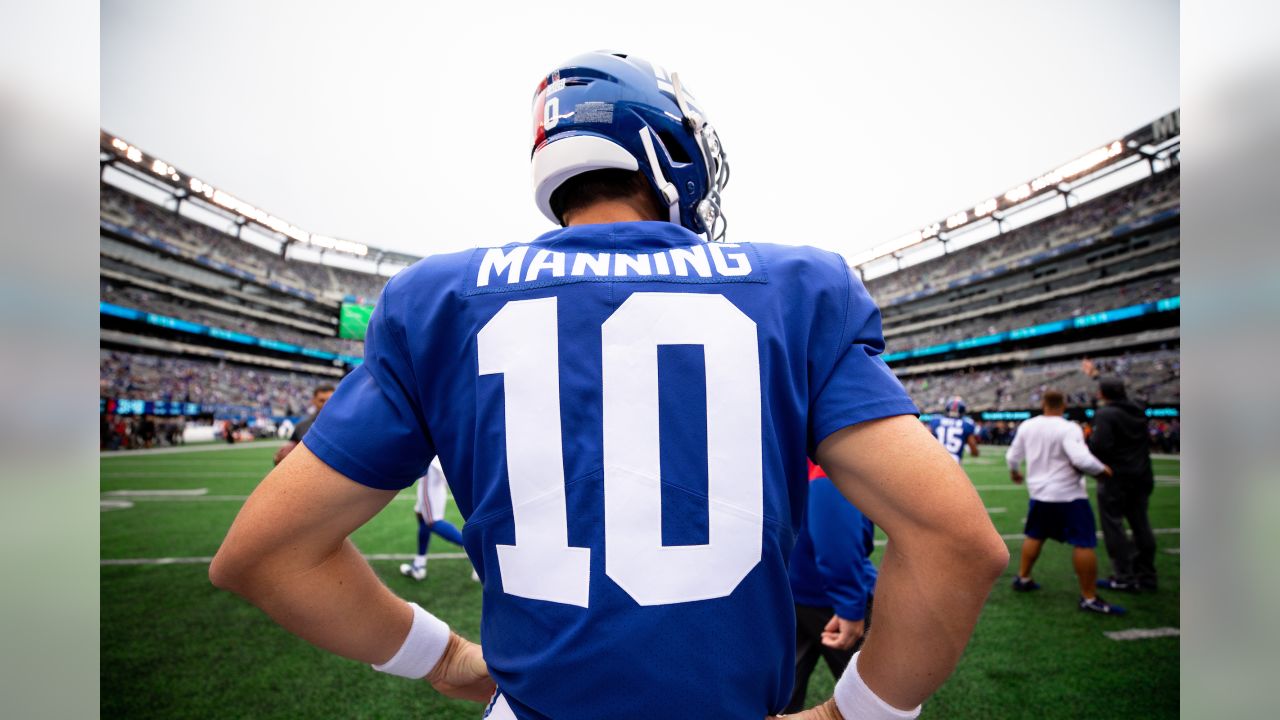 Eli adds drama to Eagles' quest to run the table

The New York Giants (2-10) will look to end an eight-game losing streak, the franchise’s longest stretch without a win since 2004, when they hit the road to take on the Philadelphia Eagles (5-7) at Lincoln Financial Field on Monday night. The Week 14 matchup represents the first of two December meetings between the NFC East rivals. The Eagles come to MetLife Stadium to face the Giants in the regular season finale in Week 17.

The Eagles have to win out over their final four games to guarantee a division title. That’s about the only way they can get into the playoffs. As if not ominous enough an atmosphere, a familiar ghost emerges from the moth balls in the Giants’ locker room:

Eli by himself is not historically a difference-maker against the Eagles, but he brings an aura to this Monday night game due to the “farewell tour” nature of this unexpected swan song.

Eli also changes the Giants offense, probably for the better, because he does that quick-release timing pass as well as anyone. He also knows how to use Saquon Barkley to full advantage, though it remains to be seen if Barkley can go full speed, still in the 4th week of recovery from a high ankle sprain of his own.

In fact, the Giants’ offense has been limited by injuries as much if not moreso as the Eagles’ injury woes.

The Giants have been without at least one of their top offensive playmakers in every game this season. For the last month, that has included tight end Evan Engram, who last suited up against the Cowboys on November 4 when he had six receptions for 48 yards. Despite his month-long absence, the talented tight end leads the team with 44 receptions. Shurmur said on Monday there is a chance the starting tight end returns to the field this week.

With Engram sidelined, rookie Kaden Smith has stepped into the starting lineup and recorded his first touchdown against the Bears in Week 12 and led the team with six receptions for 70 yards against the Packers on Sunday.

Because of injuries the Giants have a lot of young guys filling in at several positions.

Since Jabrill Peppers went down with a back injury in Chicago, Julian Love has stepped into the lineup at safety and played very well. One week after picking up his first career interception against the Bears, the rookie fourth-round pick put up another strong performance against Green Bay. Love finished third on the team with 7 tackles (4 solo) and added 0.5 tackles for loss and his first career forced fumble. Love’s play earned him an overall grade of 83.7 from Pro Football Focus (PFF), making him the highest-graded Giant in the game, according to PFF. It was Love’s second consecutive game with a PFF grade of 80.0 or higher. The 21-year-old safety showed his versatility against the Packers, as he lined up all over the field.

One thing that has never changed with the Giants— they have made stopping the run a top priority on defense, evidenced by the mid-season trade with the Jets for defensive lineman Leonard Williams. In the three games since acquiring Williams, the Giants have limited opponents to 81 rush attempts for 220 yards, or 2.7 yards per carry, against the likes of Le’Veon Bell, Aaron Jones and David Montgomery.

“We’ve made that an emphasis on the defense,” defensive lineman Dexter Lawrence said. “We have to stop the run, then stop the pass kind of deal. Our mindset is stop the run so we can be able to pass rush. It’s just one of the emphases we have made in the room.”

Jimmy Kempski at PhillyVoice says we should key on the Eagles’ defensive line play for the best chance to exorcise the Ghost of Eli in this game:

“A common theme this season has been that the Eagles have faced a lot of bad and/or injury-depleted offensive lines. The Giants are no different. They are particularly vulnerable on the edges, where 31-year old LT Nate Solder is clearly in decline, and 30-year old journeyman Mike Remmers is on his 7th team (8 if you include a second stint with the Vikings) in 8 years.”

On the season, the Giants have given up 35 sacks, which is “only” the 12th-highest amount in the NFL, and 96 QB hits, the third-most in the NFL.

I would say avoiding the Big Play Downfield is the best way to keep Eli’s genie in the bottle. He gets real frustrated when you take away his downfield stuff. He hasn’t thrown much to his receivers this year, but he has a legitimate deep threat in Darius Slayton (4.39, 37 catches, 505 yards, 5 TDs in 10 games). Golden Tate and Sterling Shepard entered the season as the Giants’ top two receivers, but Slayton, a rookie, has also emerged as a down-the-field playmaker. When the Eagles have struggled this season against the pass, it has been on the long ball.