Late surge to set up showdown with Dallas: Eagles 37, Redskins 27 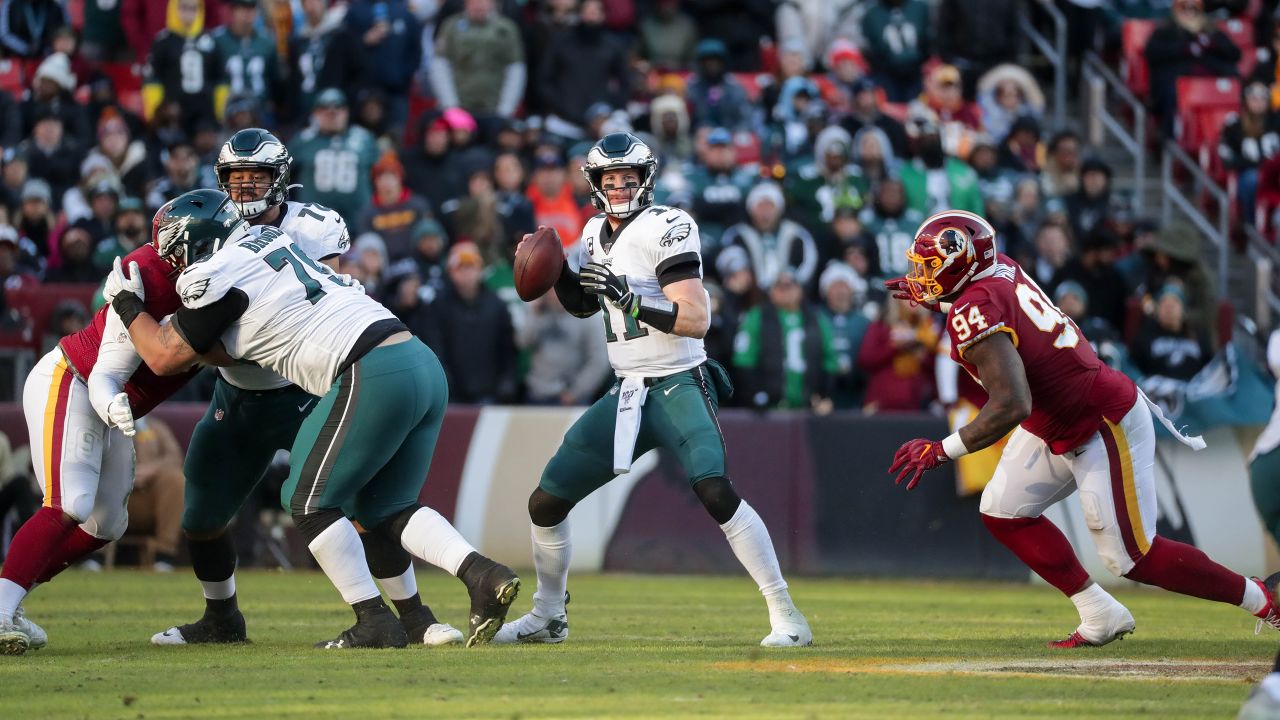 Late surge to set up showdown with Dallas: Eagles 37, Redskins 27

EYE don’t want to hear any more complaints that the Eagles are “not good enough” to represent the NFC East in the playoffs. This is the hard reality— they cobbled together a fractured roster and fought long and hard to outlast a Redskins team which played its collective heart out. People say Washington is a “bad team”. Tell that to Adrian Peterson or Dwayne Haskins. They are not a bad team. In fact, they are as depleted injury-wise as the Eagles, and they have huge upside ahead of them with the emergence of Haskins at QB as a smart and instinctive playmaker.

This was a 60-minute game from the outset. EYE told you it would be tough. No comfort zone for players or fans alike…

Carson Wentz bounced back from a potentially costly mistake by leading a 75-yard, go-ahead scoring drive and throwing his third touchdown pass of the day to keep Philadelphia’s NFC East hopes on track with a 37-27 victory at the Washington Redskins on Sunday.

Now the Eagles and Cowboys both are 7-7 and face off in Philadelphia next Sunday. This will be IT for the whole enchilada.

For the second consecutive week, Wentz engineered a late-game scoring drive, this time with the motivation of atoning for his miscue.

“Guys just kept believing,” said Wentz, who fumbled twice and lost one of those in the middle of the fourth quarter. “I didn’t lose faith or confidence at all. I just wanted one more chance. I wanted another chance to go down and the defense gave that to us, and we got it done.”

Wentz threw TD passes to running back Miles Sanders, tight end Zach Ertz and receiver Greg Ward and was 30 of 43 for 266 yards. The 4-yard pass from Wentz to Ward with 26 seconds left put Philadelphia up for good and electrified a stadium full of green-clad Eagles fans. His ability to bounce back from some accuracy issues and a turnover kept the Eagles on pace with the Cowboys.

“We knew what was in front of us,” coach Doug Pederson said. “We dealt ourselves this situation. I don’t think it’s going to take much motivation this week.”

Sanders rushed for 122 yards and a touchdown and caught six passes for 50 yards. The Eagles’ defense that struggled to stop Washington’s Dwayne Haskins most of the afternoon got him to fumble for a touchdown by Nigel Bradham on the game’s final play, leading Philly fans in the corner to chant, “We want Dallas!”

Coming off an overtime victory against Eli Manning and the New York Giants, a loss to Washington (3-11) could’ve had the Eagles facing elimination next week. Allowing an early 75-yard TD pass from Haskins to Terry McLaurin and falling behind 7-3, 14-10, 21-17 and 27-24 made that a distinct possibility.

The Redskins made things interesting with late field goals of 43 and 53 yards by Dustin Hopkins, but fell into last place with this loss and the Giants’ victory against Miami. Haskins was 19 of 28 for 261 yards and two touchdowns.

“We wanted to battle (the Eagles’) aggressiveness with quick throws into zone, blitzes and stuff like that,” Haskins said. “They’re definitely something we worked on this week that looked good.”

I have to admit, Haskins made some wonderful in-play decisions and some great throws. He is going to be a force to deal with in coming seasons.

But it came down to this culmination of duress on the road for the tide to turn:

“Three points down with four minutes, 52 seconds remaining in the fourth quarter, quarterback Carson Wentz was thinking one thing: We’re going to score and win this football game.

“Eleven plays and 75 yards later, Wentz was in the end zone celebrating with wide receiver Greg Ward, who only a moment earlier had made a leaping, contested catch of a perfectly thrown rainbow from Wentz in the left corner of the end zone to give the Eagles a lead with 26 seconds remaining.” —Dave Spadaro, PE.com

“It was a win that we had to have and I just happened to make that play,” said Ward, who had seven receptions for 61 yards on nine targets. “Carson made a perfect throw. My job was to get open. I knew the ball would be there and I was just thinking, ‘Make the catch.’ It’s a great feeling for this football team.”

Wentz completed all eight of his passes on the final drive, using the short passing game to move the chains and once connecting with tight end Dallas Goedert, who made an amazing one-handed grab, for 20 yards on a throw down the right side. As he did the previous Monday leading the Eagles to a comeback win against the Giants, Wentz was in command throwing to players thrust into action because of injury. Instead of Nelson Agholor and Alshon Jeffery, Wentz utilized Ward and the Eagles interchanged tight ends Goedert (5 catches, 55 yards) and Zach Ertz (5-61, touchdown) across the formation. Instead of Jordan Howard in the backfield, the Eagles mixed in Boston Scott (6 rushes, 26 yards; 7 receptions, 39 yards) with rookie Miles Sanders (19-122-1 rushing, 6-50-1 receiving). With right tackle Lane Johnson sidelined, Halapoulivaati Vaitai stepped in and played the entire game.

The Eagles rolled up 415 total net yards, converted 11 of 16 third downs, scored touchdowns three of four times inside the Washington 20-yard line, and had the football for 36 minutes, 57 minutes. But because the Redskins are not a “bad team”, at least not in the sense that they never give up or quit on their interim coaching staff, they still went the distance with the Birds.

“We’ve been clicking and I have to give Carson a lot of credit,” Pro Bowl right guard Brandon Brooks said. “I think he’s gotten a little bit of a bad rap this year, but he’s played great football no matter who’s been on the field. He’s stepped up. He’s a big-time leader and quarterback.”

The Eagles needed every bit of Wentz and Sanders and Co. because the defense had trouble with a Washington offense that ranked last in the NFL coming into the game, averaging 14.5 points per game. Rookie quarterback Dwayne Haskins wasn’t sacked, was pressured very little, and completed 19 of 28 passes for 261 yards and a pair of touchdowns, one a 75-yard catch-and-run by rookie wide receiver Terry McLaurin. Twice the Eagles took leads in the second half – 17-14 on a brilliant Wentz spin-out-of-trouble move and bullet throw to Sanders in the right corner of the end zone for a 15-yard touchdown and another time after the offense scored on a Wentz-to-Ertz pass from 2 yards out – and each time the defense gave up points on the ensuing Washington offensive drive, a 75-yard touchdown drive and a 20-yard drive that ended with a field goal.

But most of that Redskins push-back was due to their emerging talent and good coaching scheme— Callahan had our number for much of the game. And I’m telling ya—Haskins and McLaurin are going to punish us in days of future past.

Redskins: Rookie CB Jimmy Moreland left in the third quarter with a foot injury. … CB Aaron Colvin was injured early in the fourth and CB Fabian Moreau left with a hamstring injury in the final minutes.