Bradley Beal joins the All The Smoke podcast 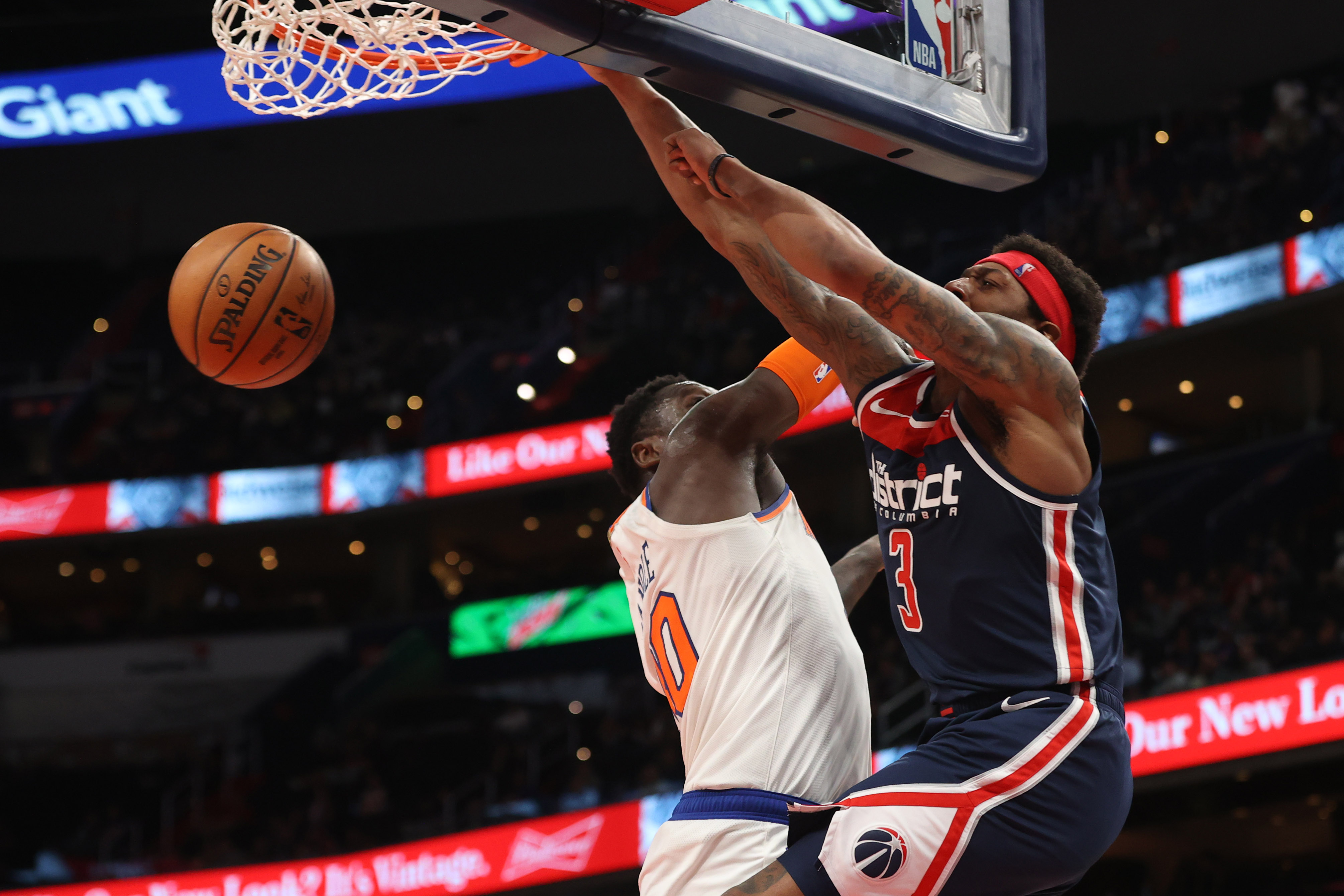 Bradley Beal joins the All The Smoke podcast

The Washington Wizards backcourt of John Wall and now Bradley Beal have joined Matt Barnes and Stephen Jackson on their All The Smoke podcast. Those four players are fond of each other as Jackson even supported Wall and Beal in D.C. during the 2017 playoffs. Wall was on Episode 32 of the podcast where he talked about a bevy of subjects including his bond with Beal, which grew during one of the toughest times of his life. You can watch the full Wall episode here.

John Wall opened up about the passing of his best friend and mom, Frances Pulley.

Bradley Beal joined Wall in Raleigh, NC instead of returning to DC after a game in Charlotte.

Beal to Wall: 'Yo, you're my brother. What you're going through I'm going through.' pic.twitter.com/C5a6rp35CI

Beal joined Episode 40 of the show on Wall’s recommendation to Barnes and Jackson. Although just premiering now in late May, the episode was recorded on April 23. The contents of the podcast were still extremely informative to learn more about Beal the player and person. For instance, Beal shares the sentiments of many NBA players that want to find a way to safely finish the 2019-20 season. “There’s a lot of variables, but me personally, I hope we get back to hooping. Hell, I was killing it, shit,” Beal joked about his status as the second-leading scorer in the NBA at 30.5 points per game. Understandably, Beal is still disappointed in the media and mostly the Eastern Conference coaches for not making him a three-time All-Star this season, but the silver lining is that he took it in stride. “To me, it was like get back in the gym and bust your ass.”

With a young roster during quarantine, the Wizards player development coaching staff has been organizing weekly Zoom meetings with the team to watch Wall and Beal’s previous playoff series. Watching back, Beal finds himself critiquing himself heavily because he has improved so much in the past few seasons. “I think it’s going to be picture-perfect,” Beal send when envisioning how he and Wall will be able to complement each other in the near future.

Going into the time capsule for a memory nearly a decade ago, Beal discussed his college decision. Brad would admit that his mother Besta is the biggest reason he is the basketball player he is today. The former Kentucky Wildcat women’s player, wanted her son to commit to Kansas for college because it was just 4 hours away from home in St. Louis. When Brad committed to Florida, his mom did not talk to him for two months, while they were under the same roof. It took the work of Brad’s four other brothers and dad to convince mom that everything would work out. Now Besta has courtside seats whenever she wants to see her son perform as an NBA superstar.

In another fun memory, Stephen Jackson asked Beal about the difference in Paul Pierce the opponent vs. the teammate. “I thought Paul was the most arrogant, asshole I’ve ever witness play basketball. He talked ridiculous to you. I’m at the free-throw line, he on the bench standing up, ‘I don’t see it, I don’t see it. I don’t know why they drafted you, I don’t see it.’ I’m mid free throw, I look and said what the fuck.” Beal got his revenge by dunking on Pierce two weeks later. The next season, they were teammates and Beal grew to love and respect The Truth.

An underrated what-if in Wizards history is if Washington would have traded the 2012 No. 3 overall pick that eventually selected Bradley Beal to Oklahoma City for James Harden. The Beard was the former No. 3 pick in the 2009 draft himself and averaged 12.7 points in 3 seasons with the Thunder where he was the 6th man behind Russell Westbrook and Kevin Durant. Harden has since gone on to average 29.6 points, 7.7 assists, and 6.0 rebounds in 8 seasons with the Houston Rockets who he was traded to four months after the 2012 draft. Who knows if a core of Westbrook, Durant, and Beal under the coaching of Scott Brooks leads to a championship for OKC.

On the All The Smoke podcast, Bradley Beal remembers on draft night his agent told him, "it's possible you might go to OKC."

James Harden would have come to the Wizards for the No. 3 overall pick in 2012 and Bradley Beal would have played with Russell Westbrook and Kevin Durant.

In the never-ending discussion about John and Brad’s relationship with each other, Beal said this. “The one [headline] that everyone keeps saying is that we don’t like each other. That’s the one that pissed both of us off because for so long we were both young and immature that we let the media stir it up to where it kind of both affected us. It affected me and I was like ‘damn, is he really thinking like that?’ And he’s like, ‘damn does B really feel like that?’ It was like a silent tension, but then it came to the point like let’s nip this shit in the butt because we never had any beef.”

If you need more evidence that Wall and Beal are like brothers, take in this story from December 2019. Wall had just gotten the news that his mom was going to lose her fight against breast cancer. The Wizards landed in Charlotte on December 9 the day before they face the Hornets. Beal went above and beyond as a teammate and did exactly what you expect between family.

On All The Smoke, Bradley Beal recalls consoling John Wall during his mom’s cancer fight: "I go in the room and there's shit everywhere. It looked like a tornado hit the room. I could do nothing but just hug him and hold him, just keep him cool because dawg lost his best friend." pic.twitter.com/uaFBBmNTVv

You can watch the full Beal episode below.