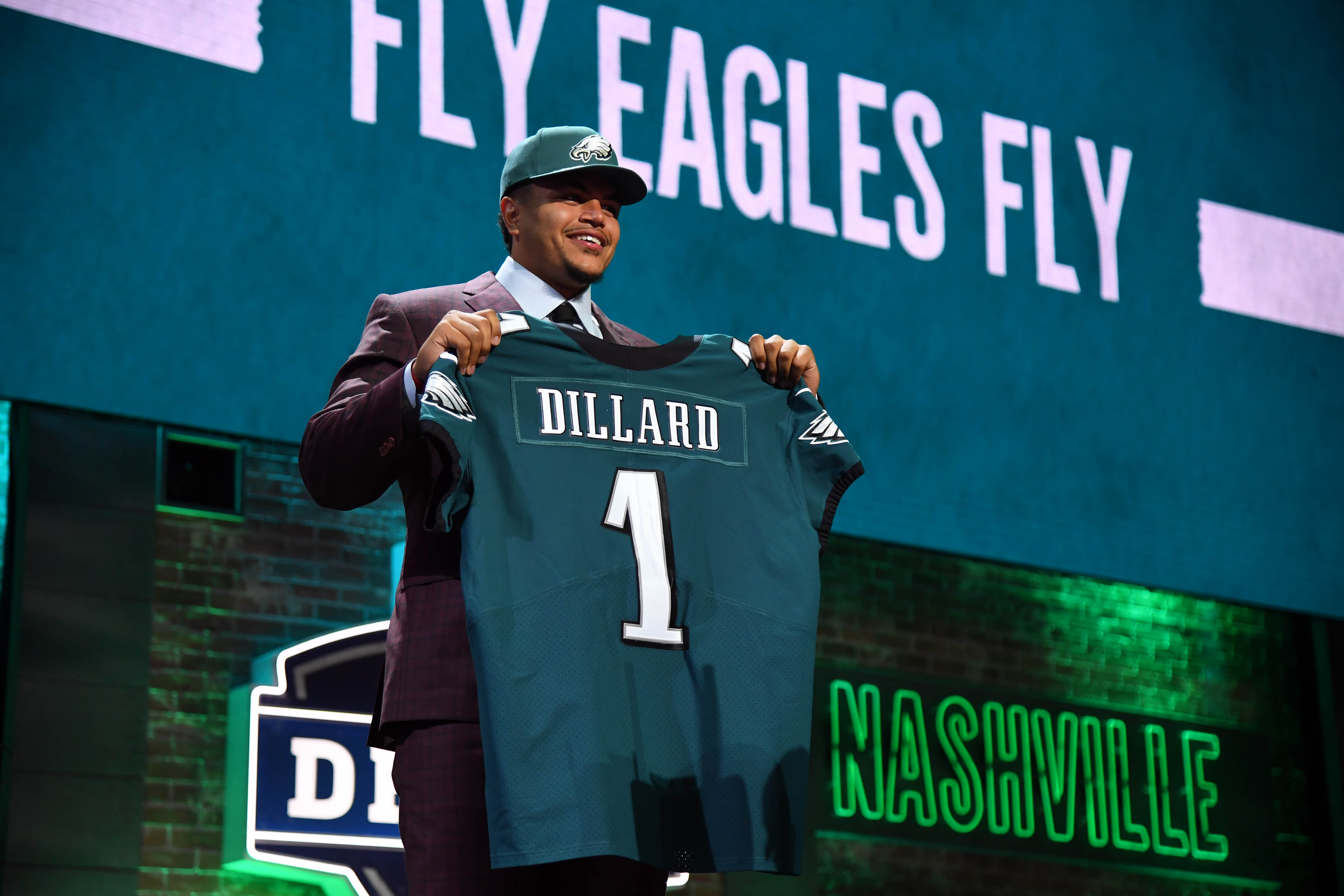 Our esteemed alumnus contributor and Drafttek writer ~BROZ actually predicted from the BGN gallery several days ago a trade-down scenario where Howie Roseman and the Eagles moved back from #6 overall to #12 overall in exchange for certain favors.

This is the greatest on-time on-line prediction since the EYE was the first media outlet to break the story that Alshon Jeffery would be signed by the Eagles on a 1-year $14 million deal, on March 8, 2017.  As it turned out, EYE had inside info from one of my neighbors, former Washington and 49er GM Vinny Cerrato. In fifteen years of doing this column, it is the only scoop the EYE has ever had.  But ~BROZ’ scoop was even better, because he imagined the breaking news all by himself.

The Dave Spadaro take on the amazing trade-back:

“After a day to let it sink in and examine the ramifications and to discard the “hot takes” after the Eagles traded out of the No. 6 position in the first round of the 2021 NFL Draft, it all makes sense. The Eagles are a team looking to bolster its draft capital, and by dealing with Miami and moving to No. 12 overall on April 29, moving into the fourth round of the draft (No. 123 overall), and securing the Dolphins’ original 2022 first-round draft pick, the Eagles have done just that.”

They’ve set themselves up to control their path and open all options for 2021’s draft, and they’ve put themselves in position to have three first-round draft picks in 2022. This is where a team that needs to rebuild its roster and infuse it with high-end young talent wants to be.

The complexity of the coup was probably not included in ~BROZ’ prediction, but he still gets the credit. The Dolphins used the latest first-rounder they received from the Texans in the Laremy Tunsil trade to move around the draft board. First, they sent the No. 3 overall pick to the 49ers for the No. 12 overall selection and a third-round pick in 2022, plus San Francisco’s first-rounders in 2022 and 2023. Next, the Dolphins sent the Nos. 12 and 123 picks and their own first-rounder in 2022 to the Eagles for the Nos. 6 and 156 picks in next month’s draft.

This impacts a handful of quarterbacks and just about every team in the top 15 of the draft.

The Eagles could now have as many as three first-round picks in next year’s draft, depending on how much quarterback Carson Wentz plays for the Indianapolis Colts this season.

Philadelphia received a conditional second-round pick from the Colts when they traded Wentz to Indianapolis that becomes a first-rounder if Wentz plays 75% of the offensive snaps, or if he plays 70% of the snaps and Indy makes the playoffs.

The risk here is obvious: The Eagles are passing up the chance to snag a pedigreed future franchise quarterback or blue-chip playmaker at #6 overall, and it could come back to haunt them. But this is a unique year in which a quarterback could be selected with each of the first four picks in the draft, pushing some serious talent down the board in the process.  The reward of future draft capital for the sake of moving from #6 to #12 overall probably exceeds the risk of lost opportunity at #6…. and who’s to say Howie Roseman is done wheeling and dealing anyway?  That new draft capital can always be packaged to go in the opposite direction!