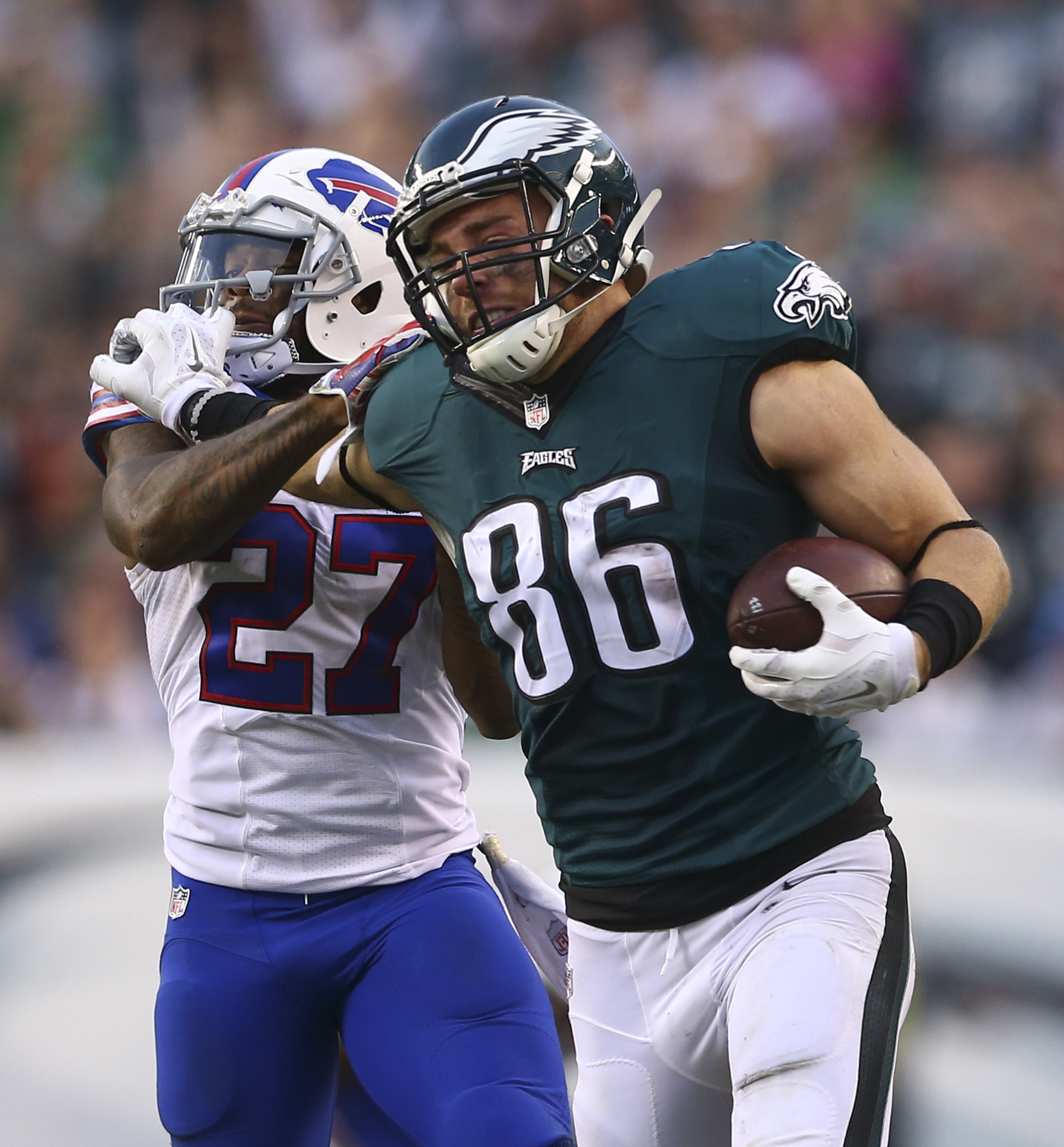 The question wasn’t if but when, so EYE didn’t want to make a big deal about Zach Ertz’ farewell.

After 579 career catches in the regular season and another 33 in the playoffs, including the biggest one of all – an 11-yard catch and dive into the end zone to account for the winning points in Super Bowl LII – Ertz moves to a new team and a fresh start after the Eagles traded the three-time Pro Bowl tight end to the Arizona Cardinals on Friday in exchange for a fifth-round pick in the 2022 NFL Draft and rookie cornerback Tay Gowan.

Although he is now a member of the Cardinals, Ertz’s legacy will live on in Philadelphia. His catch total is second only to Harold Carmichael in franchise history and his 6,267 yards and 38 touchdowns rank fifth and seventh, respectively, in the Eagles’ record books. He established a franchise record and NFL record for tight ends with 116 receptions in 2018, and became one of the most productive pass catchers in the entire league over the last decade. It was fitting for Ertz, then, that he scored a touchdown in his final game as an Eagle in front of an adoring crowd. His time in Philadelphia was one of great highlights and productivity all the way to his last game with the team.

“Zach Ertz built a special legacy in Philadelphia. Talented, tough, and passionate, he helped to establish our team’s culture and played a vital role in our success over the years,” Chairman and CEO Jeffrey Lurie said. “Zach created so many memories that will live on forever, from setting numerous franchise and league records, to reaching across the end zone for the game-winning touchdown in our first-ever Super Bowl Championship. He will always be a member of the Eagles family, not only because of what he accomplished on the field, but also because of the wonderful person, dedicated leader, and exemplary role model that he was for nine seasons in Philadelphia. We wish Zach and Julie nothing but the best.”

A second-round pick (35th overall) out of Stanford in 2013, he shared the position with Brent Celek as a rookie and added 36 receptions, 469 yards, and four touchdowns while playing 41 percent of the snaps. Ertz continued to see increased snaps year by year, and his production jumped as well – from 58 catches in 2014 to 75 receptions in 2015 to 78 catches in 2016. In 2017, Ertz made his next big leap as a touchdown-maker and a valuable weapon in the red zone. He scored eight touchdowns in that magical season and then followed it up with the monster 2018 campaign – 116 catches, 1,163 yards, and eight touchdowns.

No lamentations but instead a realistic approach to the Ertz saga by Dave Spadaro:

“If there was ever a win/win situation, trading Ertz to the 5-0 Arizona Cardinals and getting back a 2022 fifth-round draft pick and rookie cornerback Tay Gowan was it. Painful, but the right thing to do. And so the Eagles did it, announcing a trade they had all but agreed to a couple of days earlier, keeping Ertz in the conversational loop the whole way, making him a captain for Thursday night’s game against Tampa Bay, having him catch a touchdown pass, and then officially consummating the deal on Friday morning.”

Yeah, it was orchestrated like that…Ertz had mixed emotions about leaving but he didn’t really want to be here anymore.

“This was the right opportunity,” Roseman said on Friday. “This was the best opportunity for both us and Zach. And I think you’ve got to look at it really from our perspective and never going to be easy trading Zach Ertz. Not easy, not an easy day for any of us. But from our perspective, the opportunity to see Dallas (Goedert) and see Dallas in a larger role and obviously he’s a free agent (after 2021). And there’s no secret that that’s, obviously, something here going forward that we have to address. And so, getting him in a role where it’s not just sharing time and he’s the guy because in terms of our bargaining power, there’s going to be no discount on Dallas Goedert. So, we know that, so we want to get as much information and give him as much opportunity to take over that and see him in that role as much as possible, as opposed to guessing on it.

“Then you talk about our young guys, and I think what changed a little for us was the surprise of camp, and it was just camp because we didn’t see it in the preseason games was Tyree (Jackson) and just seeing how he’s working to get back and the skills that he has in his body. We want to make sure that we’re going into next year knowing as much as we could. If he’s going to look like he did during Training Camp, like, that’s going to be a player for us. But he’s got to show it in games. And this is an opportunity for him to come back and for us to see that. We don’t think that’s just a shot in the dark. We think this guy’s got some traits.

“So, we want to see that, and Jack (Stoll) and Noah (Togiai) are two guys we’ve been high on. So, this isn’t like we think we’re bare at that position. And then we talk about, obviously, you get a fifth-round pick and we’ve had some success in the fifth round, and we get a corner that we thought would be a chance to be a player. And then, obviously, there’s money involved, too (savings from the salary cap in trading Ertz), that could add to another player. So, I think that was our opportunity. Again, not downplaying a Hall of Fame player in terms of Zach Ertz, but that’s why we made the move.”

Yeah, and money (and cap savings) had nothing to do with it…

Ertz won’t be asked to be the savior in Arizona, just an added weapon in an offense that already has DeAndre Hopkins, A.J. Green, Christian Kirk, and Rondale Moore as pass catchers. The Cardinals have run ’10’ personnel — one RB, four WRs, no TE — more than anyone, but they figure to get Ertz on the field after making this trade, even in four wide receiver sets if they line him up as a receiver.

The Eagles didn’t get the offers for Ertz they wanted this summer, so they decided to mend fences with the franchise legend in what ended up being an emotional goodbye and classy exit from Philadelphia. At the end of the day, Philadelphia was able to receive a Day 3 draft pick (a 2022 fifth-rounder) and a player in rookie cornerback Tay Gowan — a much bigger haul than anything they were offered prior to the start of the year.

Getting a fifth-round pick is a hit or miss, but Gowan seems to fit in the cornerback plans for Philadelphia. Gowan appeared to be a Day 3 steal in the sixth round this year, as his 26.2 passer rating in single coverage since 2019 was the second lowest in college football. Gowan makes plays on the ball and fits the coverage scheme Eagles defensive coordinator Jonathan Gannon likes to run.

So where does Gowan fit in this defense? Darius Slay and Steve Nelson are the starters on the outside and Avonte Maddox mans the slot, but using added cornerback depth to develop a young player at that position benefits the Eagles down the road. Gowan was on the 53-man roster, but was a game day inactive for all five games Arizona played. With Zech McPhearson and Josiah Scott also on the roster, expect Gowan to continue being a project for the Eagles as a game day inactive going forward. The Eagles will continue to develop Gowan in the hopes he can contribute in 2022, especially with Nelson and Maddox hitting free agency after the season.