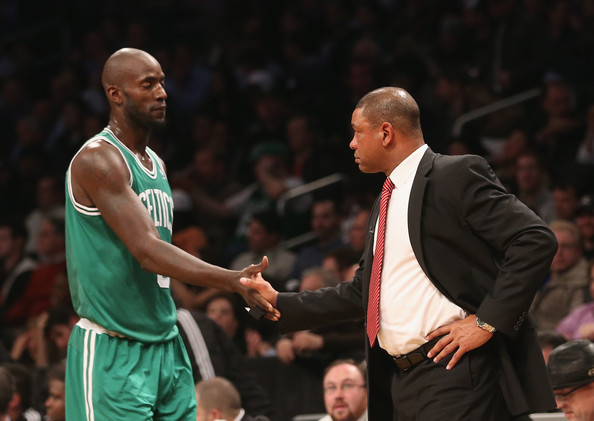 Doc Rivers is still in touch with the players he led to an NBA championship as head coach of the Boston Celtics in 2008. This week at the annual ABCD Hoops Dream fundraiser at TD Garden in Boston, Rivers gave his thoughts on the likelihood of Minnesota Timberwolves power forward Kevin Garnett returning to basketball this year.

“I think Kevin… loves the young guys on this team,” Rivers said. “He loves how they work. He thinks they have an old school mentality… I think he’s really gotten into Kevin, the teacher… He was a phenomenal teacher in Boston… and I think Kevin loves teaching these young guys.”

Although Rivers did not definitively say that Garnett will return, he did imply that he at least likes being around the team. This sentiment is important because Garnett’s age and bad knees prevent him from taking real on-court ownership of the team and its games.

Garnett, instead, has taken on the role of a mentor since returning to the team in January 2015. Garnett’s influence has drawn Wolves Rookie of the Year center Karl-Anthony Towns under his wing.

“I think we both looked at each other and saw competitors,” Towns said in December regarding his relationship with Garnett. “He’s like our father on the court and we want to make sure we don’t disappoint him.”

Garnett is still brooding on his decision this offseason. The Timberwolves will have an answer soon enough, though. Team media day is about three weeks away, and Garnett will certainly be a topic of discussion.