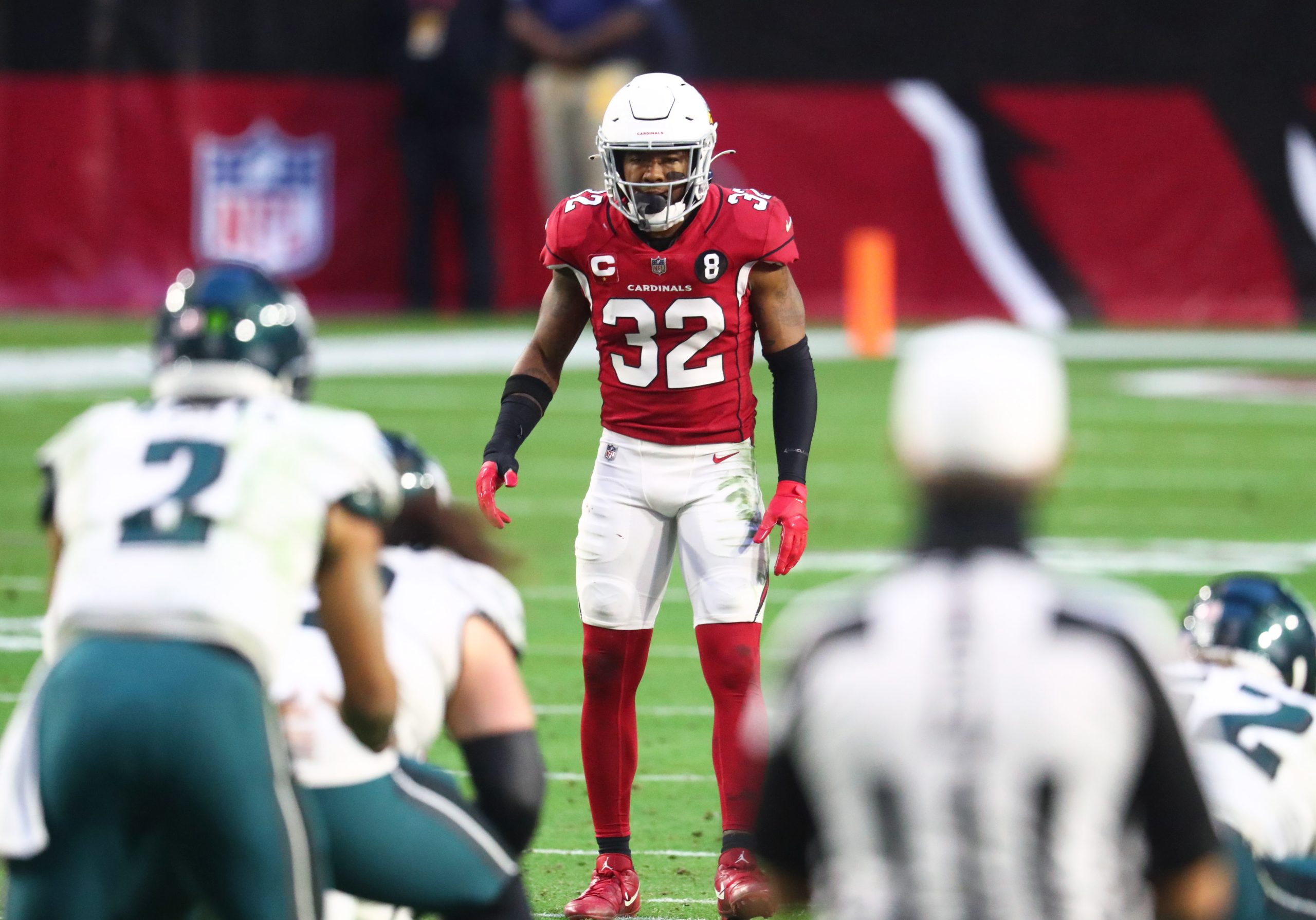 Eagles are favored as “the better team”… but as GK Brizer warns us, the Eagles are dinged up a tad and possibly prone to a bit of overconfidence going into this one:

He’s got a point, and it’s not on his head. Cardinals are dangerous when cornered in Phoenix.

Last week the Cardinals used a 16-6 fourth quarter to pull away from the Panthers in a 26-16 road victory. Kyler Murray was 23-of-32 for 207 passing yards with two touchdowns and one interception. They didn’t get a ton from the ground game, as three different running backs combined to pick up 3.6 yards per carry. But their defense harassed Baker Mayfield into two interceptions and two sacks, and that was the winning difference.

Philly is clearly the better team, and there are going to be a ton of Eagles fans in the stands, so that will help too.

Larry Rupp (FanDuel) writes: “This is the first true opportunity for the Eagles to prove they are one of the best teams in the NFC. So far, their first four games have come against opponents that did not make the playoffs last season. That is no longer the case. Kyler Murray is the first dual-threat quarterback they will take on as well. There’s no reason to stop backing Philly now, though. The Eagles are averaging the second-most yards per game (435.5) and allowing the third-fewest yards per game (277.3) in the NFL. They have put together an elite balanced roster and will cause head coach Kliff Kingsbury a ton of frustration.”

Yeah, it seems like a safe bet the Eagles should prevail. But weird stuff happens in the desert.

The Cardinals aren’t likely to have starting center Rodney Hudson Sunday against the Philadelphia Eagles. His knee injury kept him out of practice this week, and head coach Kliff Kingsbury wouldn’t say who will replace him. It might be Sean Harlow, who has been a backup center with the Cardinals but also fills in at guard. If Justin Pugh is able to go Sunday and play left guard, it allows Harlow to slide to center.

Three players are eligible to be activated off injured reserve — cornerback Antonio Hamilton, backup quarterback Colt McCoy and wide receiver Antoine Wesley. While decisions on Hamilton and McCoy will come before the game, Wesley has been ruled out with a setback in his recovery from a groin and hip injury. According to a Pro Football Network report, Wesley has a quadriceps injury and needed an MRI Friday.

Wide receiver Rondale Moore (knee) and cornerback Trayvon Mullen (hamstring)  are also to be evaluated for their availability based on what they show prior to kickoff. And defensive lineman J.J. Watt, asked how he is feeling since his heart episode last Wednesday that didn’t keep him out of last week’s game, had a one-word response. “Good,” Watt said.

All of that would seem to improve the Eagles’ advantage, but the Eagles are hurting too.

• Kicker Jake Elliott (right ankle): Elliott is out for Sunday’s game against the Cardinals.

• Linebacker Patrick Johnson (concussion): Johnson is out for Sunday’s game against the Cardinals.

• Cornerback Avonte Maddox (ankle): Maddox is out for Sunday’s game against the Cardinals.

• Tackle Jordan Mailata (shoulder): Mailata is doubtful for Sunday’s game against the Cardinals.

• Running back Boston Scott (rib): Scott did not play in Week 4. He’s questionable to play against the Cardinals.

• Guard Isaac Seumalo (ankle): Seumalo will return against the Cardinals on Sunday.

At least we’ve got this going for us—former Cardinals edge rusher Haason Reddick will be making his return to State Farm Stadium with the Eagles and he’s coming off a performance against the Jaguars that earned him NFC Defensive Player of the Week. Reddick had two sacks, two forced fumbles and two fumble recoveries.

“You’ve got to have a plan for him, there’s no doubt,” Kingsbury said. “It’s been great to see just his evolution, how he’s become one of the best pass rushers in the league. When I got here, he was a standup (defender) and we were trying to make him a middle linebacker. Finally, we were like, ‘Hey, let’s try him where he played so well in college.’

“It’s just been awesome. He’s such a great person, to see the success he’s had. You’ve got to have a plan. He wrecked that game against Jacksonville last week creating those turnovers there late, so we’ve got to have some way to try and slow him down.”

Kyler Murray, fresh off receiving a new contract, is the leader of the Cardinals’ offense. With star receiver DeAndre Hopkins still unable to play this week, the weapons surrounding Murray are not at full capacity. Murray has still been able to throw for 991 yards, five touchdowns, and two interceptions through the first four games of the 2022 season.

Murray has a strong arm but also has the added dimension of running ability. Those are traits he has capitalized on this season – to the tune of 24 rushes for 91 yards and two additional touchdowns. Much like Jalen Hurts, Murray is an all-around quarterback. The Eagles will need to contain him in this game to come out victorious.

James Conner is the main back on the field for the Cardinals. With 45 carries through four games, Conner has taken the place of the departed Chase Edmonds. On top of his 45 carries for 145 yards, Conner has also caught 13 passes for 95 yards in the passing game. During times when Conner needs a rest, the other member of the backfield is Eno Benjamin. Although Benjamin has yet to find a true hold in the offense, the talent is there for a dangerous game.

With DeAndre Hopkins suspended to start the season, the Arizona Cardinals traded a first-round pick on draft night for Marquise Brown. So far, this has been a valuable addition. In 2022, Brown trails only Davonte Adams in targets with 45. He has 30 receptions for 339 yards and two touchdowns on those targets. With injuries plaguing the Cardinals’ pass game this season, he has been one constant.

Rondale Moore saw his first action of the season in Week 4 against the Carolina Panthers and while he was back, A.J. Green was forced to miss the week with his own knee injury. The Cardinals are hopeful Green can make it back for the game against the Eagles.

Former Eagle Zach Ertz will be taking on his former team. Although injured to start the season, Ertz is off the injury report and could provide an important outlet for Kyler Murray as he avoids a Philadelphia pass rush.

The linebackers group for the Cardinals is led by do-it-all LB/S Isaiah Simmons. This unit is young but fast. It will be a challenge for the Eagles to keep them from interrupting the timing of Jalen Hurts when he drops back to find his receivers downfield.

Byron Murphy provides a solid cornerback to matchup with the Eagles’ receivers, and Budda Baker is still one of the best safeties in the NFL. This duo will make a formidable pair which Jalen Hurts will need to account for when passing the ball downfield.

You add it all up and Brizer’s recipe for a classic Eagles letdown has most of the ingredients in play here. They’re hurting, we’re hurting, and Kyler Murray adds the hot sauce. Buying time in the backfield with his sense of anticipation and escapability; darting away from gasping defenders in the open field to make a back-breaking gain on the ground; zipping passes from unconventional angles into the tiniest of windows to complete throws down the field…Murray is the kind of quarterback defenses don’t see on a weekly basis.

“All the coaching details that go into that with off-schedule plays, we’ve got to be on it and understand that those are going to come up in the game and what he likes to do when he tries to make off-schedule plays, and he can make them,” defensive coordinator Jonathan Gannon said. “He has a very unique skill set. He’s very dangerous. He’s got arm talent. He runs around. He’s not like a stick-and-cut guy … He’s not afraid to give ground and lose 20 yards from the line of scrimmage and runs around and finds open people. It’s hard to cover for a long time.

“It’s really just about us being us and going out there and playing to our standard and playing ball the way we’ve been playing these last few weeks,” said linebacker Haason Reddick, the reigning NFC Defensive player of the Week. “We know who Kyler is. We know he can make plays with his feet and that he has great arm talent, which is undeniable. We just need to be ourselves and continue to do what we do and do it well.

“And that’s all. We need to continue to be the dominant defense that we’ve been and play the same way we’ve been playing.”

Here’s the plan, then, says Dave Spadaro: “Play Eagles defense. Stay disciplined. Be physical. Be smart and stay within the team structure and keep Arizona – a team that has seven consecutive losses at home dating back to the 2021 season – scuffling offensively.”

Gee, what could go wrong? As GK Brizer suggests, just about anything…beware the goofy letdown!