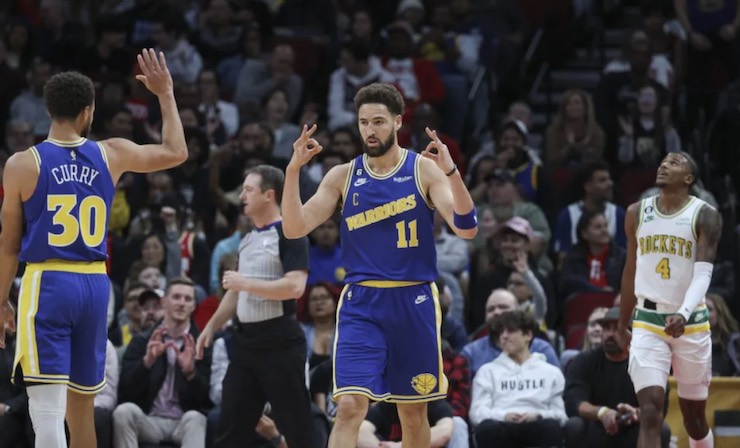 Klay Thompson scored a season-high 41 points on Sunday night to help the Golden State Warriors beat the Houston Rockets and inch closer to the .500-mark.

Thompson poured in 20 first-quarter points and shot 10-for-13 from 3-point range for the game.

It was the sixth time that the Warriors’ star had reached 10 3-pointers in a contest and the 15th 40-point performance of his career.

🔥 @KlayThompson WENT WILD in the @warriors win! He went off for 20 PTS in Q1 on his way to a season-high 41 PTS and 10 triples! #DubNation

After the 127-120 win, Thompson was outspoken about his confidence and conditioning, “I finally feel like myself. My legs feel great. I’m cutting to the rim, taking great shots and I’m just excited for what’s to come… I don’t care if it’s a mid-November game. That felt great.”

“It feels amazing. I’m hard on myself, so I’ve been wanting one of these and to get one and kind of open the floodgates, it’s only up from here. I promise you,” Thompson said in his postgame interview.

The performance marked just the third time this season that Thompson has scored more than 20 points. However, there have been signs that the Warriors’ star is progressing in the right direction.

In six October games, Thompson averaged just 12.3 points per game while shooting 34.6 percent from the field and only 28.6 percent from 3-point range.

Since then, Thompson has turned the corner, especially from beyond the arc.

Despite returning from a pair of serious injuries to his knee and achilles, Thompson has come under criticism for his play this season.

Following Sunday’s hot-shooting night against the Rockets, the 32-year-old guard is averaging 17.3 points per game on 37.7 percent shooting from 3-point range for the season.