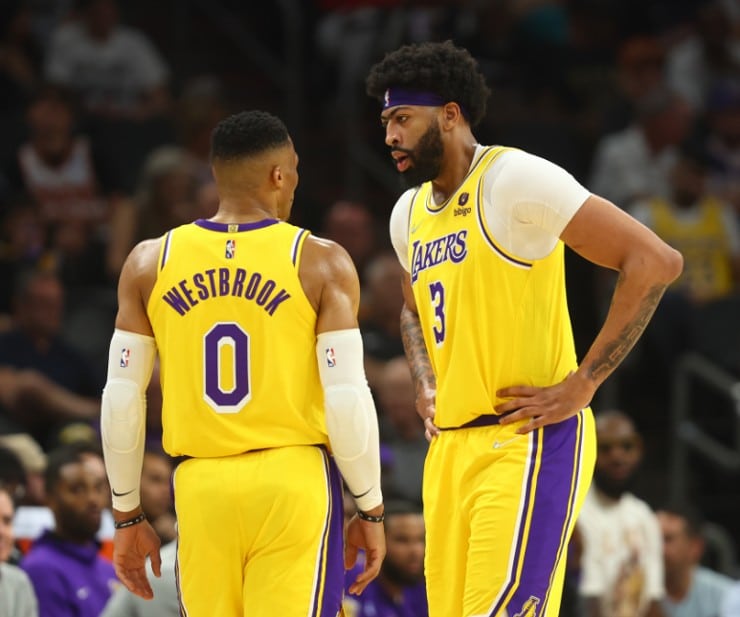 According to sources, the Los Angeles Lakers are wanting healthy players in return for a potential Russell Westbrook trade. If the front office finds a new home for their acquired guard, the staff will only move him if veteran players are obtained. The organization is seeking a fair deal. And, this could involve Anthony Davis. The key word there is could.

Westbrook has a player option worth $47,063,478 for the 2022-23 season. Any team willing to trade for the triple-double king will be forced to work with — or around for that matter — his style of play as well. Per one report from Marc Stein, the Charlotte Hornets were linked as a potential trade partner.

Moreover, the plan was to shop Terry Rozier and Gordon Hayward to the Lakers. Hornets’ general manager Mitch Kupchak was aiming to lower his team’s salary cap hit. LaMelo Ball and Miles Bridges will likely ask for larger contracts in the upcoming future. Not to mention, Hayward wants out of Charlotte. Rozier and Hayward over Westbrook sounds like a plus.

Are the Lakers pursuing multiple players for a Westbrook trade?

After undergoing further research, Stein learned that Lakers’ G.M. Rob Pelinka is after players with no injury history. He stated, “One league source said that injuries would be a prime consideration in any deal, given how injuries have so routinely intruded upon the last two seasons for both 37-year-old LeBron James and 29-year-old Anthony Davis.”

Instead of trading for one superstar, the Lakers could focus on acquiring multiple above-average players. A general manager should never put all the marbles in one jar. If a team throws enough sludge at the wall, something will eventually stick. Perhaps, quantity is quality in this case.

“An ideal scenario for the Lakers is turning Westbrook’s contract into two ore more veteran newcomers who can help them immediately and, of course, stay on the court,” explained Stein. “It would be the inverse, in essence, of the ill-conceived trade that sent Kyle Kuzma, Kentavious Caldwell-Pope and Montrezl Harrell to Washington to acquire Westbrook.”

More worrisome problems lie ahead for the Lakers

Moving on to another important topic, the Lakers have more than a couple of roster issues right now. This goes beyond Westbrook. The team has a few injury-prone, unreliable stars. Case in point, Anthony Davis fits the bill. He turned 29 last month, but he has the body of a 35-year-old.

In the past couple of seasons, Davis has suffered groin, knee, ankle, heel and calf injuries. The player appeared in 36 games in the 2020-21 season, and he played a total of 40 regular season games in the 2021-22 season.

In the first round of the 2021 NBA Playoffs against the Suns, the forward was sidelined after straining his left groin in Game 4. In December of 2021, Davis sustained an MCL sprain in his left knee versus the Timberwolves. This injury sidelined him 17 games.

Next, the player had to sit out 18 games after injuring his right ankle against the Jazz in February. Even if the Lakers traded Westbrook, how many games will Davis be able to play next season? The unknown is most concerning.

Furthermore, would it be too unrealistic and just dumb for the Lakers to trade Westbrook and Davis for younger talent? Team chemistry was a problem for Westbrook this past season, not injuries. So, at least his market value is high. In 78 games played, the guard averaged 18.5 points, 7.4 rebounds and 7.1 assists per game.

What if LeBron James sprains his MCL or suffers an ACL injury next season? None of the players listed above are getting any younger. Also, we all know LeBron James is off limits for a trade. In short, the last thing the Lakers want is an injury-prone Gordon Hayward.