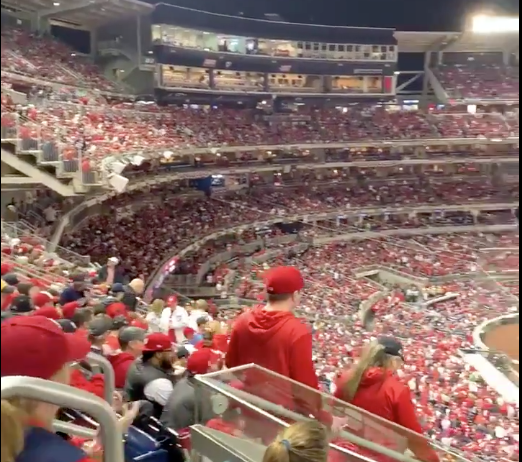 President Donald Trump attended Game 5 of the World Series on Sunday night, and Nationals fans are probably wishing he didn’t.

It was speculated that Trump would throw out the ceremonial first pitch before the game, yet for some reason, that honor was given to Chef Jose Andres, which seemed a bit bizarre.

Still, Trump stayed true to his word and attended the game at Nationals Park, and he was shown on the videoboard at one point.

Nationals fans weren’t thrilled about him being there, though, so they chanted the following when he was shown:

“Lock him up!” they yelled.

Full on “LOCK HIM UP! LOCK HIM UP!” chants heard throughout the crowd at Nats Park after President Trump was announced and shown on screen here #WorldSeries pic.twitter.com/uDC19wh5Pm

Yeesh. That was a cold reception for POTUS.