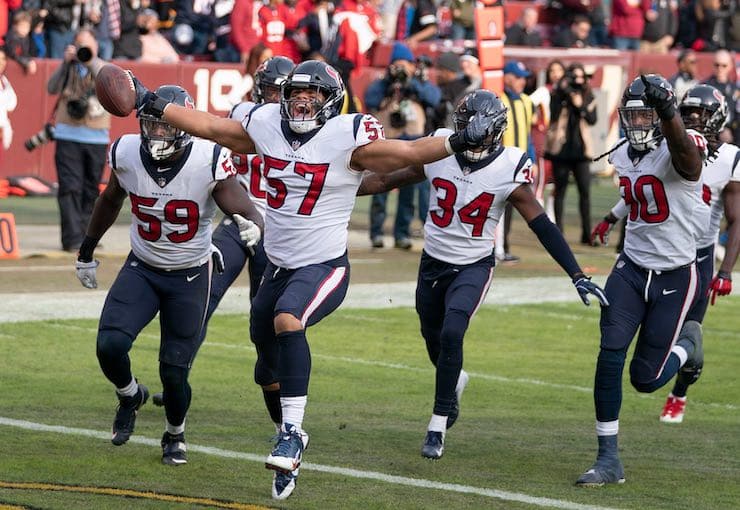 Lovie Smith’s coaching career has had its ups and downs— and this season is a downer for him.  His Texans are 1-5-1 and trending in the wrong direction.  Houston’s injury report is a disaster.

Meanwhile the Eagles have only ruled out two players— DT Jordan Davis (high ankle sprain, now on IR and out until Week 13) and DB Josiah Scott (ankle).

The Texans have struggled on offense all season, and Lovie is not likely to find the answer on Thursday night. Still, Houston has played relatively well defensively, giving up 22 points per game, but part of that has to do with teams not feeling pressure to put up big point totals to beat a team with little offensive punch. Houston is relying almost exclusively on their run game to get any kind of sustained offense going.

Philadelphia is giving up 16.9 points per game and is among the best in the NFL in sacks and pressure rate. Plus, they lead the league with 16 takeaways, including 10 interceptions. Scoring on them is going to be a tall order for a Houston team averaging 16.6 points per game.

The Texans and second-year quarterback Davis Mills are throwing for 196.3 yards per game, while Philadelphia allows just 183.4 yards per game through the air and less than 4.8 yards per play. Mills has also thrown six interceptions and taken 16 sacks, so he could be in for a long night on Thursday.

Of course, it doesn’t help him that his top receiver, Brandin Cooks, is openly blasting his team for not trading him at the deadline and seems to have no interest in helping the organization. Plus, the Texans’ number two receiver,  Nico Collins, has a groin injury and is unlikely to play.

That means Houston will likely rely heavily on rookie running back Dameon Pierce, who has been their best offensive player. Houston is rushing for 92.4 yards per game and Pierce has 539 rushing yards in seven games. He’s just going to find the sledding much harder against this Eagles’ defense…or at least he should. But wait, a sliver of hope for Lovie’s offense— the Eagles’ run defense has been somewhat vulnerable this season. They have allowed 5.1 yards per carry (29th in the league) and have struggled with missed tackles (41 on the season, 10th most per game). They also just lost one of their best run defenders in mammoth defensive tackle Jordan Davis to a high ankle sprain. The Texans have built a solid offensive line anchored by two impressive tackles in LT Laremy Tunsil and RT Tytus Howard. Left guard Kenyon Green was the 15th overall pick in the 2022 draft, and while he has struggled a bit to start the season, he has a ton of talent. As a unit, their offensive line has allowed just 16 sacks so far this season (10th in the league, and 15th on a per-dropback basis).

Part of the reason for the Texans’ solid numbers at protecting the quarterback is that second-year signal caller Davis Mills rarely holds the ball long enough to let plays develop down field. Mills is averaging the 9th-fastest time to throw and the 10th-lowest intended air yards, and on average he throws the ball 2.1 yards behind the first-down marker. In other words, he gets rid of the ball quickly and mostly throws short passes just a few yards beyond the line of scrimmage.

EYE cannot see any surprise defensive strategy from Lovie Smith to affect what the Eagles are doing on offense right now, especially in a short week where the Eagles were able to rest most of their starters in the 4th quarter of last Sunday’s game. The Eagles will plan to run the ball a lot on Houston because the Texans have struggled mightily against the run.  The Texans have a league average pass defense (17th), but are dead last in rushing defense, giving up a historically bad average of 186 yards per game.  To put that in context, the 2008 Lions who went 0-16 allowed the most rushing yards per game of any team in the last 20 seasons. They allowed 172.1 yards per game, 14 fewer yards per game than the Texans are currently allowing. Last week against the Titans, rookie QB Malik Willis got his first career start, so it was fairly obvious that the Texans would be stacking the box to stop Derrick Henry and forcing Malik Willis to beat them. Henry still went off for 219 rushing yards.

There is always the looming misfortune factor of a road team (the Eagles) playing on a very short week, and the strange things which can happen to keep the game close.  Plus the statistical probability that Lovie Smith is due to win a close game sooner or later with his incredibly unbalanced roster… but EYE will be stunned if the Eagles don’t get the W… Lovie in this scenario will be unrequited, but don’t bet the cover with certainty.