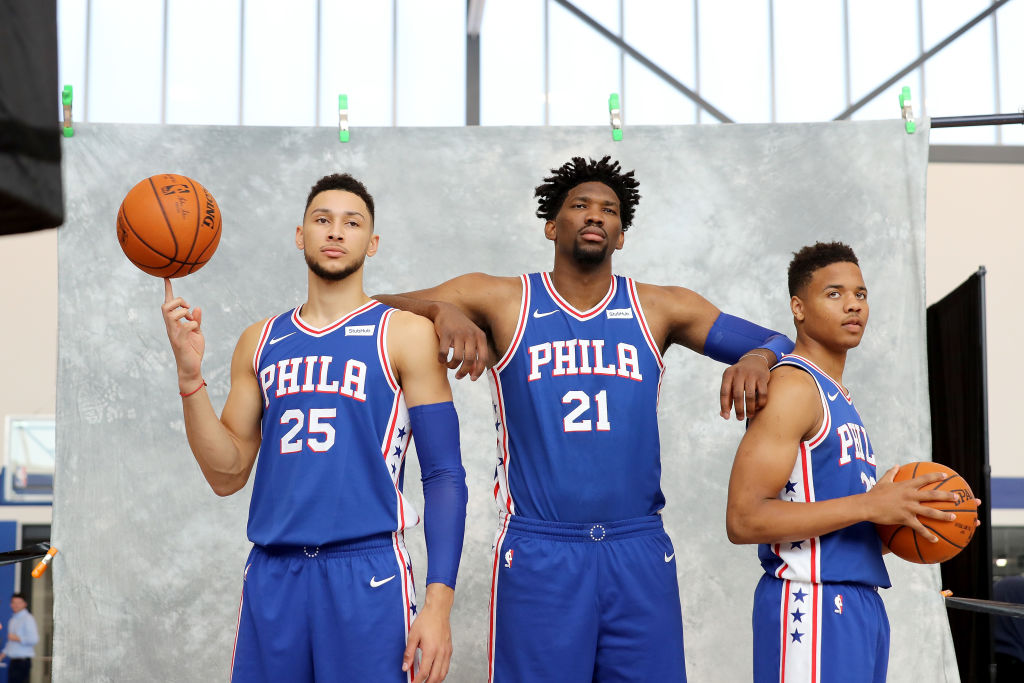 The Philadelphia 76ers did not sign a superstar this summer but the silver lining is that their 3rd star might be hiding in plain sight on their roster. The top pick in the 2017 NBA draft had a tough rookie campaign and hopes to redeem himself with a strong sophomore season. Markelle Fultz is the X-Factor for a team with expectations to contend for a conference title if they can unlock his special potential.

Last season did not go the way Markelle envisioned his rookie season would go. In summer league he rolled his ankle which forced a premature end to his short stint in Las Vegas. In between the summer and training camp he suffered a shoulder injury, a scapular muscle imbalance to be more specific. Aside from that description I’m not a doctor and it has been hard to nail down any further specifics as to how it occured and how the symptoms and pain can affect a professional basketball player. Seeing Fultz shoot like this caused many experts to share their theories and narratives testing the limits of even my wildest imaginations. I’m not here to speculate, but as a result of the injury Fultz missed most of the season, returning for the last few games of the regular season and flashed his potential becoming the youngest player to post a triple double in NBA history. The end of his season was another low point as he remained glued to the bench with the 76ers losing a tight 5-game 2nd round playoff series to the Celtics.

Last year was last year. This year Markelle plans to flip the script. He’s ready to move forward and won’t be bothered with revisionist history. The first step involved spending the summer with Drew Hanlen putting up 150,000 shots to stabilize the muscle memory in his shooting mechanics. In training camp Markelle earned the trust of the coaching staff to win a starting spot over Redick. The preseason was promising with his shooting form looking better. His handles and change of pace allowed him to step into open mid-range pull ups with confidence. Markelle’s ability to keep the defense off-balance is impressive and gives him plenty of space to take wide jumpers. This has yet to translate to the 3pt line as he only made one 3 in five games and didn’t really hunt some wide open looks. This concern will remain until Fultz gives enough sample size of consistent long range shooting to remind us of that kid everyone saw stroking long bombs at Washington. Markelle Fultz was a good shooter. This season he will have the opportunity to prove that he is a good shooter.

Shooting concerns aside, Fultz brings the combination of size, athleticism, playmaking, and defensive ability that the Sixers will need to blend with the unique talents of their two superstars. Point-Forward Ben Simmons is a non-shooter and doesn’t project to become a floor spacer. Fortunately his size, athleticism, and preternatural passing ability cements him as an elite point guard. Joel Embiid is the dominant modern big without actual flaws beyond health concerns, learning how to read the double team, and improving his shooting consistency. The gaps that need to be filled are clear: floor spacing, secondary play-making, and defensive continuity. Last season the 76ers spread the floor around Simmons rotating shooters in Redick, Belinelli, Saric, Covington, Ilyasova. This worked in the regular season paving the way to a surprising 52 win season. The reality check came in the form of Brad Stevens and the Boston Celtics locking down on the shooters and giving Ben ample space. Ben struggled forcing tough shots in the paint and the shooters failed to convert their opportunities. That difficult playoff series will serve as an important learning experience for the core players on the team. Roster continuity is only as good as the players ability to progress by developing together and learning from their mistakes. That is why this season will be defined by incorporating a healthy Fultz into the core.

It is most fitting that the Sixers start this season in the same arena where they finished last year. Fultz has an opportunity with this platform to gain confidence and use it as a springboard for the rest of his season. Everyone will be watching his comfort level taking open jump shots if the Celtics egg him on to shoot. Expect both Simmons and Fultz to hear “coward” chants from the rowdy TD Garden crowd. I’ll be watching Fultz closely for early indications of his comfort level playing off the ball with Simmons running the offense. It really feels like his season could go in any direction and it will be interesting to see how he handles his fluctuating role within games: starting as the shooting guard, and possibly coming off the bench in the 2nd half as the backup point guard.

Ultimately the 76ers season will be judged on their performance in the postseason. They will most likely need to get past the same roadblock that derailed them last season. They didn’t have Fultz last time around. Would he have made a difference? This season we may get to find out. The time is now for Markelle Fultz to become the 76ers X-Factor and eventually fulfill his potential as their 3rd star.