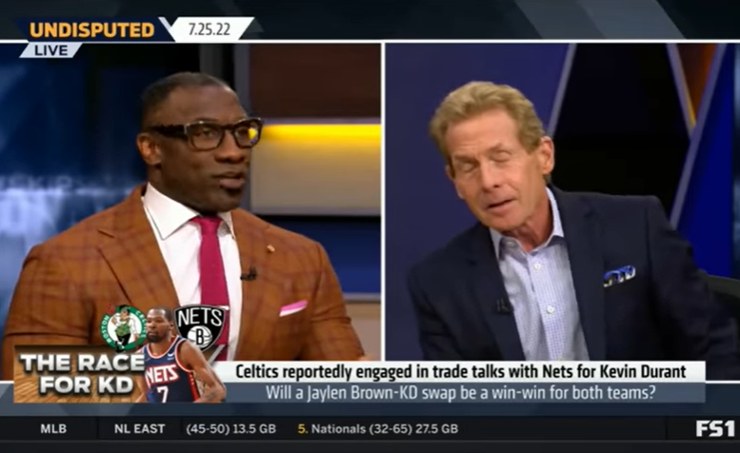 Watch Shannon Sharpe debate Skip Bayless on the potential Nets-Celtics trade for Kevin Durant on FS1’s Skip and Shannon: Undisputed. Host Jen Hale asked Sharpe on whether or not he thinks the Celtics will trade Marcus Smart, Jaylen Brown, another rotation player and multiple draft picks for Durant.

The retired NFL tight end replied, “Yes, and I was ahead of the curve. If you go back and look at my timeline on Twitter — look it up — I bet you a hundred grand; I proposed a package of Jaylen Brown the moment Kevin Durant requested a trade. Go look it up, it’s on Twitter.”

Then, Skip immediately came back with: “You’ve been just adamant about him going to Golden State… XYZW.” But Sharpe attempted to defend his previous claims, which we all know can change on a dime. Funny enough, Bayless is no different.

“Even though Jaylen Brown is a 25-year-old All-Star, I still believe Golden State, and you see the package they have for Golden State,” Sharpe explained. ” So, if the three-time Super Bowl champion had to pick a more generous trade offer, he’d choose the Warriors’ trade package. Watch the full segment down below.

“They asked for Jordan Poole, Moody, Wiseman, and Andrew Wiggins and three first-round draft picks. And Golden State said, ‘Nah, bro. Ya’ll must be thinking we’re Minnesota or somebody.'”

Shannon went to state that he believes the Celtics would be worse off defensively without Smart, but the team would improve with Durant offensively. This prediction is a possibility. After all, Smart won Defensive Player of the Year last season. On the flip side, Bayless thinks Durant will remain in Brooklyn.

“So now you got wings of Jason Tatum and uh, Kevin Durant,” mentioned Sharpe. “You still keep your rim protector in Robert Williams, and you can do a lot of different things with Al Horford…”

“But I’m not letting us, I’m sorry. I’m not letting Marcus Smart hold this deal up, if I got the opportunity to get Kevin Durant.” And Sharpe is correct. If the rumors are true, it will come as no surprise if Celtics G.M. Brad Stevens pulls the trigger.

Would the Celtics or Nets win a Kevin Durant trade?

If the Celtics front office trades Smart, Brown, Grant Williams and multiple first-round draft picks for Durant, are they better off with just the two-time Finals MVP? While Durant is one of the best players in the NBA, the Celtics led the league in defensive efficiency last season.

Meanwhile, the Nets would still remain a playoff contender with Seth Curry, T.J. Warren, Ben Simmons, Royce O’Neale, Patty Mills, Joe Harris and Kyrie Irving. Even without Durant, if Boston gives up Smart and Brown, this is a solid plus for Brooklyn. The draft picks help as well.

In short, this would be a win-win trade for both Eastern Conference teams. The Celtics would have to collapse in the 2023 NBA Playoffs for some of us to admit that coach Ime Udoka’s team regressed with Durant.

The scenario is in the cards, but quite a few fans cannot picture the C’s underperforming with one of the best players in the league. Other articles pertaining to Shannon Sharpe, Skip Bayless or Kevin Durant are on the main page.