Your Morning Dump… Where if you don’t believe in these Celtics, what have you been watching? 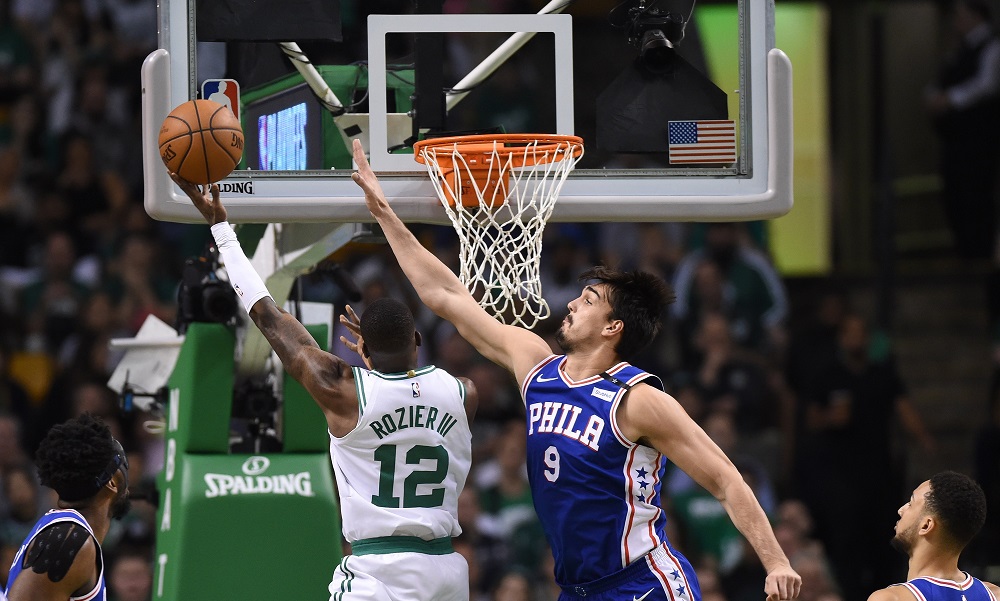 Your Morning Dump… Where if you don’t believe in these Celtics, what have you been watching?

Brett Brown said that those weren’t the real Sixers in Game 1, and indeed a sharper, more determined version took the floor Thursday night.

But after hitting a peak lead of 22 points in the second quarter, Philadelphia’s edge slowly dissolved, as the Celtics, despite spotty offense, once again found their way back in through a crack.

They took a 2-0 second round series lead with last night’s 108-103 Game 2 win over the Sixers, with rookie Jayson Tatum (21 points) and Terry Rozier (20 points, four 3-pointers, nine assists, seven rebounds) driving the Celtics back out of that first half hole.

Jaylen Brown, after a day of work to make sure his tender right hamstring would hold up, made his first appearance of the series with 13 points on 5-for-12 shooting.

Al Horford’s drive past Joel Embiid with 8.3 seconds left put the game out of reach for the Sixers, and capped a 12-point, 13-rebound, five-assist performance by the Celtics center.

Then, [Jaylen] Brown — a game-time decision with the sore hamstring that kept him out of Game 1 — rose up and threw down a two-handed slam that threatened to dislodge TD Garden from its foundation. It capped a violent and completely improbable late-first-half run that spearheaded Boston’s comeback from as much as a 22-point deficit.

And it simply felt like there was no way the Celtics were not going to complete their comeback.

For anyone who still doesn’t believe in these Celtics (cough Charles Barkley cough), it’s fair to ask: What the hell have you been watching?

Even after allowing Philly to creep back and take a five-point lead with under six minutes to play, the Celtics didn’t give in. They regained the advantage less than two minutes later and held the Sixers at arm’s length with a series of clutch plays from Rozier, Tatum and Horford.

The Cs now have control of the series, and while the Bucks demonstrated that a 2-0 lead isn’t the end, it still feels pretty good. So many contributors stepped up last night, including Jaylen (a pair of hellacious dunks, two triples, and a few grimaces that made everyone worry about his hammy); Aron Baynes (brave defense on Joel Embiid, plus hitting a three to give Boston its first lead of the night); the Marcii (Smart, four three-point makes on top of his defensive chaos, and Morris, two huge triples in fourth-quarter crunch time); and Greg Monroe (played just six minutes, but helped swing momentum to the Celts to start their comeback).

Brad Stevens on Greg Monroe: "He just stays positive, and then when his number gets called, he turns a game around for you. That's what's special about being a part of a team."

Another key was completely shutting down the alleged Rookie of the Year.

Celtics coach Brad Stevens’ game plan of guarding Simmons largely with Horford in the half-court and building a wall around the paint at every turn has essentially neutralized the rim-attacking prowess of the 6-foot-10, 240-pound point guard. Faced with the adversity of a Boston team that continues to force him to try to do things that he’s not comfortable doing — namely, trying to shoot from anywhere outside of arm’s reach of the rim (and, increasingly, even there) — the No. 1 pick in the 2016 NBA draft seemed to disengage on Thursday.

Simmons attempted only four shots from the field in Game 2, missing all of them, and most of them badly. He took some shine off his seven assists with five turnovers. He managed only a single point — one free throw — in 31 minutes of floor time, during which the Sixers were outscored by 23 points, the worst mark in the game.

Yahoo: The Celtics made a 22-point deficit and Ben Simmons disappear to take a 2-0 lead

In postgame, Simmons claimed the Celtics didn’t bother him, he was just “overthinking.” Okay. Whatever you say.

The Garden crowd also brought the energy, as expected. In every postgame interview I saw, which included Brad and several players, everyone made sure to applaud the fans’ intensity.

Celtics rooters also had the last laugh on Kevin Hart, a Sixers fan who was sitting courtside. The diminutive comedian was in taunting mode when his team had the big lead, and guffawed at Jaylen for an airballed free throw. But it didn’t end well for Kevin.

Lastly, from the great @Timi_093, enjoy this uncut look at the frenzied final 3:30 of the first half, when the Celtics’ comeback really took off.

Boston Sports Journal: Final: Game 2 – Celtics 108, Sixers 103 – After trailing by 22 in 1st half, Boston shocks Philly  |  Anatomy of a comeback: Terry Rozier and the run that changed the game for Celtics

Some timely and well-deserved coverage of the Celtics’ emerging star appeared yesterday.

As a youngster in Shaker Heights, Ohio, Terry Rozier had a plan.

“He told me he wanted to go to Louisville back in seventh grade,” Danny Young, Rozier’s coach in middle and high school in Shaker Heights, said. “I just asked him, ‘That’s gonna take a lot of work, are you willing to do it?’ And he said yes.”

Born in Youngstown in March 1994, Rozier was by all accounts a rambunctious child, climbing furniture and finding, and playing with, the guns his mother kept scattered around the house for security. When Rozier was 6, he moved an hour’s drive away to live with his grandmother in Shaker Heights to try to avoid the violence and crime that had affected other members of his family. His father, Terry Rozier Sr., has been incarcerated for most of the younger Rozier’s life, including a current stretch for pleading guilty to charges of involuntary manslaughter, kidnapping, and aggravated robbery. While in high school, Rozier lost a cousin and a friend to violence in Youngstown in the same year.

Though he initially struggled with the move, Rozier came to see that his mother, Gina Tucker, and grandmother, Amanda Tucker, had his best interests in mind. And he thrived, especially on the basketball court.

“He wanted to be the best. And he was gonna work at it,” Young said. “He was one of those kids that once he gets there, he wants to stay there. You always hear those stories about NBA players that make it, and then a couple of years later they’re out the league. I’m sure that that fuels him, to want to be there for the long haul and not the short term.

“He puts the work in, and the world is seeing the fruits of his labor.”

Death threats forced Terry Rozier out of his childhood home.

Someone asked me this week if the Celtics would possibly trade Rozier after Kyrie was healthy again. The thought was that Terry has shown so much since taking over for Kyrie, he could be a valuable piece to get, let’s say, Kawhi Leonard without giving up someone like Jayson Tatum or Jaylen Brown.

The merits of such a potential trade are a topic for another day, in part because we don’t quite know yet how valuable Terry is. Versus the Bucks, he was immense at the Garden but ordinary in Milwaukee. So far against the Sixers, he’s been unstoppable – again, at home. The next two games in Philadelphia will afford Terry a new chance to demonstrate if he can have the same impact on the road as he’s had on the parquet.

And that’s far from the only question. The Celtics will likely have to choose between Rozier and Smart. Rozier has one year left on his contract, while Smart is about to be restricted free agent. Keeping both players would have implications for the salary cap, luxury tax and – especially – playing time. Because Rozier now knows he should be a starter, and that won’t happen here once Kyrie is healthy.

How this is handled could have a dramatic impact on the future of the franchise. But that’s why Ainge gets the big bucks.

For now, it’s exciting to see Rozier making the leap right before our eyes, and getting recognition for doing so.

And, finally… Even more Terry

Around halftime, one of Terry’s fans (the real Drew Bledsoe, pictured at the winery he owns) gave him a shoutout on Instagram. The caption was: “Rocking the Scary Terry shirt on game day!! Go get em kid!!”

Real GM: Present Versus Future In The Eastern Conference

Globe: What’s the deal with the Celtics’ weird tipoff times?