Your Morning Dump... Where the Celtics are tough 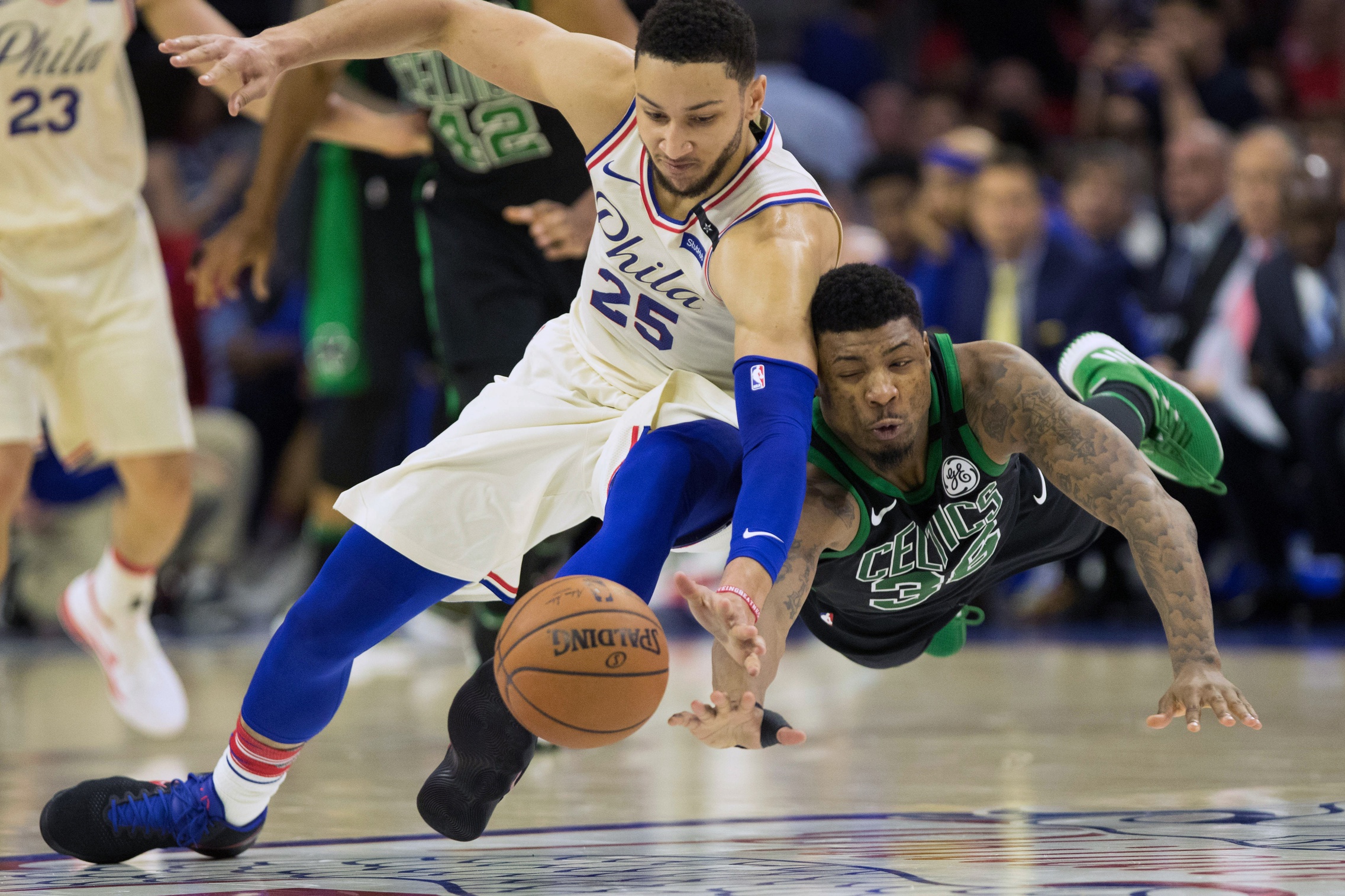 Your Morning Dump... Where the Celtics are tough

Almost every playoff team has one or two guys who make you wonder: Are they really ready for this? Are they going to shrink under postseason pressure? How will they respond when the other team amps up the physicality?

Boston has zero such players. This is a fierce team. No one is afraid to shoot, or venture outside his proven skill set — something almost everyone has had to do since Irving’s knee surgery. They give maximum effort every second. It is a focused effort; they rarely veer out of scheme. Hit them, and they hit back — harder. Nurturing such a strong culture while returning only four players from last season’s team is an enormous challenge.

It starts with Ainge, who has a soft spot for manic competitors. All things (almost) equal, Ainge is going to take the guy who needs to get loose balls. “My staff laughs at me,” Ainge told ESPN.com, “because I always gravitate to those kinds of players.” He is still gushing about Aaron Craft.

Zach Lowe takes a deep dive into the Celtics’ culture and cohesiveness in a fairly long piece for ESPN (it’s Zach Lowe, of course it’s going to be long).

Ainge picks the players, but Stevens is the arbiter of playing time. The (deserved) fawning over his stoic demeanor and play-calling genius has obscured another fundamental truth: Stevens is something of an old-school hard-ass. “If guys aren’t doing their jobs,” Horford said, “they just won’t play.”

Yeah, Stevens requires guys to fill their roles–that’s how he took Butler to the Final Four two years in a row. At the same time, he sticks to the stuff that can be seen:

He focuses on actions: We didn’t get this rebound. You should have made this rotation earlier. The criticism is never about the player’s character. No one is labeled lazy or stupid or selfish. Stevens simply describes what did or did not happen, and what should happen next time.

And this is how Stevens gets buy-in. If you call some guy ‘lazy’, when he’s out there busting his butt, you’re going to lose him, because your criticism doesn’t match his reality. But if you say, ‘hey, you missed that rotation’, well, he probably knows that too, and if you follow up with, ‘you gotta watch for x, because that’s how you know they’re going to y, well, you’re actually coaching the guy, not making a fool out of him.

“If we keep playing like this,” Horford told Tatum, both recalled, “we are going to be all right.”

Yep. The kids are alright.

It’s not clear Boston would do Tatum for Leonard straight up without getting a clean bill of health for Leonard and an assurance he re-signs.

That’s not the least bit crazy. As Lowe points out, the C’s have Tatum on a rookie deal during a period where they’re going to have to make choices on a couple guys coming off their rookie deals. Having Kawhi, Hayward, Horford and Kyrie all on huge contracts would put the C’s in a tough spot.

And in the end, I don’t think there’s much to the ‘trade Kawhi’ story. Kawhi is a lot like Tim Duncan, and, there was a time when Duncan was dang near ready to leave San Antonio–but he stuck around and became a legend. I figure Kawhi will do the same.

Page 2: Where the kids grew up in a hurry

“Our guys really embrace that. The thing that I would say is that I always hoped we would get to the point where if things don’t go our way, we’re still extremely competitive because we have a kind of a foundation in place. These guys are really talented, they’re really tough, they fit Boston, and hopefully we’ll keep playing well.”

In an interesting twist, the older members of this team trust their younger teammates to carry a veteran load.

“It’s a great feeling,” Tatum said of the trust he’s receiving. “You work all season to earn the trust of your teammates and coaching staff for moments like this, whether it’s finding Al on the lob or a layup. We’re just trying to make the right play.”

“It’s like night and day. I remember the first time we played them, I was so nervous,” he said. “It’s been 90 games since then and I’ve been through a lot. A lot more relaxed and calm. I’m ready to go out there and play.

Ninety games in, Tatum ain’t a rookie anymore. Jaylen Brown has been a starter most of the season. These kids have delivered, so much so that the picks that were laughed at in 2017 and 2016 are now being used as ‘proof’ that Stevens is overrated and that, of course, the Celtics should be in the ECF, seeings how they’re starting a pair of #3 picks (Sixers, mind you, were starting a #3 & a #1, with another #1 inexplicably bench-bound).

In a season of continually adjusted expectations, we’ve reached a point where the whole dang narrative has been ripped up and the talking heads are struggling desperately to come up with a new one. Stevens gets zero COY votes from his peers, and that’s insane, except, well, maybe he’s coasting on talent? I guess? And maybe the Celtics aren’t an injury-riddled franchise riding unexpected contributions from young players, but they’re getting the contributions expected from high caliber players, and so it’s not a surprise that they’re where they are?

Regardless of the story that guys like Screamin’ A finally agree on, the Celtics are back in the ECF. First back-to-back trip for this particular shade of green since 1987.

And, like last year, the only people who aren’t surprised seem to be the Celtics themselves and the absolute diehard ‘greenhearts’–and even those of us who look at the world with green tinted glasses have to whistle a bit in amazement at how this has all worked out.

You can count me among those who thought the Celtics would have trouble meeting last year’s win total, and they exceeded it.

Once the playoffs started, I figured they had an easy road to the ECF, but that’s where I figured it would stop.

And now I’m wondering if I need to rethink that assessment too.

This Celtics team is better than the team that faced LeBron last year in the ECF, and this Cavs team is unquestionably worse.

Regardless of how it ends, I really really want to see a game 7 in Boston. If, somehow, the hospital Celtics (with Shane Larkin now added to the casualty list) make it to the Finals, it’s going to be a strange world indeed. Whether it’s Harden & Paul or Klay, Steph and KD, the C’s are going to be tasked with defending super stars in the Finals, and with Finals-calibrated officiating. In short, plug your ears if you have sensitive tastes, because the world ain’t ready for the noise C’s fans are going to make over the officiating if they somehow make it to the Finals.

But just sit back for a moment, close your eyes, and imagine this:

A Game 7 contest between LeBron and both Jaylen and Jayson.

Calling back that epic duel from 2008, but this time, it’s a tag-team affair. It’s LeBron coming face-to-face with the future.

Back in ’08, LeBron could comfort himself by the relative states of his career and Paul Pierce’s. He was on the upswing, Pierce was at the top. Now he’s in the Paul Pierce role. He ain’t going to be better than he was this year, and Jaylen and Jayson are just getting started.

Boston.com/Globe: The Celtics reportedly wanted Joel Embiid to ‘man up’ and shake hands after Game 5

NBC Sports: If any team can dethrone LeBron, it’s the resilient Celtics | Brown and Tatum? They’re the real deal