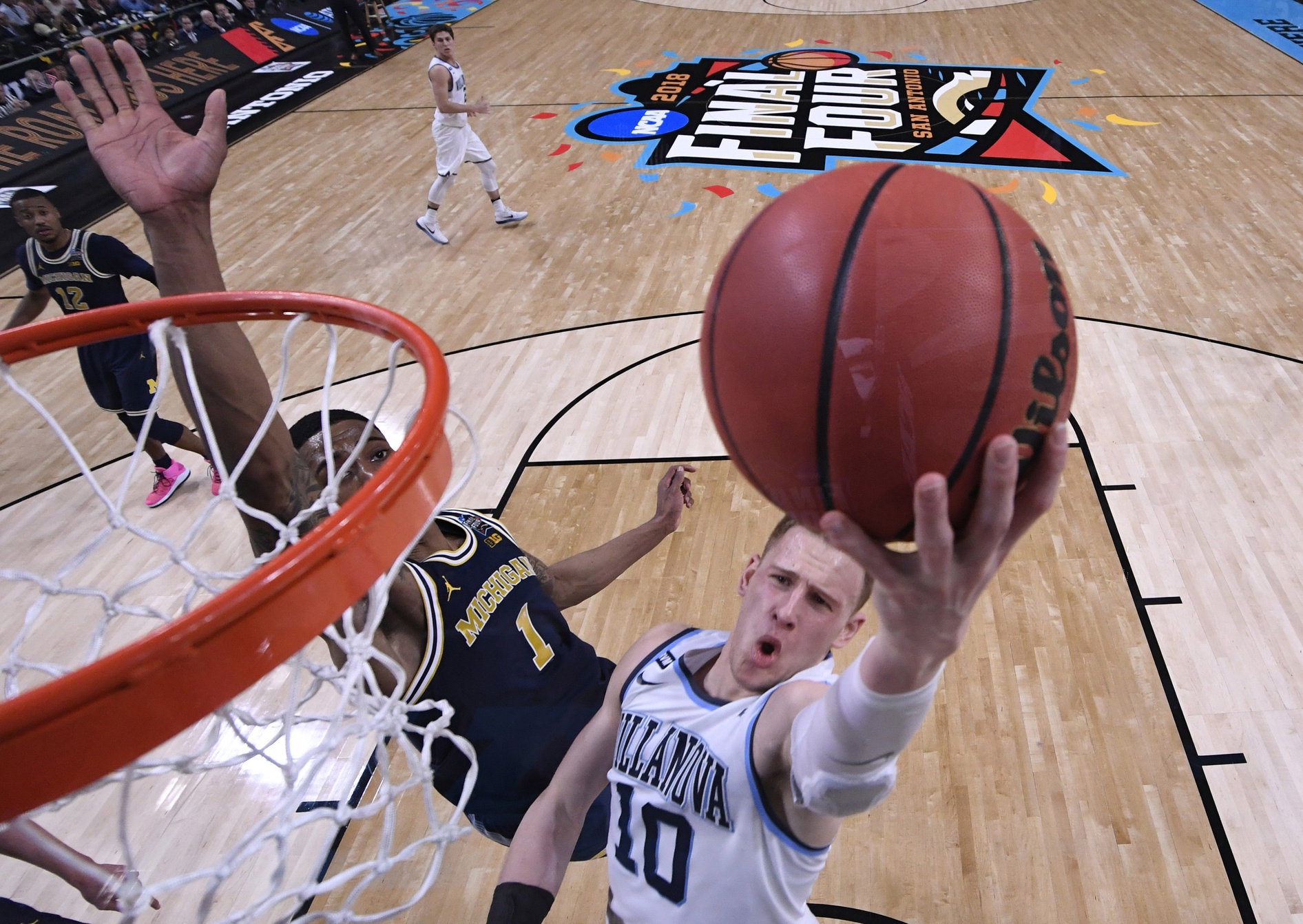 DiVincenzo, now known by many as “the Michael Jordan of Delaware” or “Big Ragu”, was mostly an afterthought in the NBA Draft conversation prior to his dominant performance in the NCAA championship game. With that being said, his next-level tools were on full display all year for Nova. DiVincenzo strikes me as an intriguing combo guard in the modern game. While Donte led the squad in turnovers per game (2.0), he finished second on the team in assists (3.5) and steals (1.1) per game and third and fourth in scoring (13.4) and rebounding (4.8), respectively. He was also one of four Wildcats to sink 40-plus percent from beyond the arc. Moreover, DiVincenzo upped his production (from 1.2 to 2.1 threes per game) and percentage (36.5 percent to 40.1 percent) from three-point land as well. DiVincenzo’s well-rounded offensive game, strong frame, lateral agility and elite leaping ability make him an excellent fit for most teams, especially those who already have a bigger guard or forward running the show (i.e., playmaking). White Men Can’t Jump remains one of the all-time classics and a personal favorite of mine. Nevertheless, DiVincenzo dispels the title, having finished with the top marks in the standing vertical leap (34.5 inches) and max vertical leap (42 inches, tied with Josh Okogie) stations at the recent NBA Draft Combine.

Putting aside the fact that DiVincenzo is an elite athlete, there are shades of ground-bound backup point guard Matthew Dellavedova in Donte’s game. With good size for both guard positions, DiVincenzo gets after it defensively, and he’s willing and eager to make all the hustle plays that won’t necessarily show up in a traditional box score. And as I touched on briefly earlier, he’s an underrated passer, in part because his 31 points (on 10-of-15 from the field and five-of-eight from three) in the title tilt overshadowed his three dimes.

Perhaps a more accurate (and optimistic) comparison for DiVincenzo is former teammate and current Los Angeles Laker Josh Hart. Having been Hart’s understudy to a certain extent, it’s not hard to see the similarities in their unselfish styles of play. DiVincenzo earned his “Big Ragu” nickname from a buzzer-beating, game-winning put-back versus Virginia. A couple months later, Hart returned the favor with an equally (if not more) memorable, go-ahead follow-up with less than 10 seconds in the semifinals of the Big East Conference Tournament. Hart was the better defender, shooter, and scorer in college, and he had more responsibility, but DiVincenzo was a superior sharer of the rock. Hart has a slight height and length advantage (6-5 with a 6-8.5 wingspan) too, though his immediate success in the Association is reason for optimism regarding DiVincenzo. I’ll go out on a limb and say he’s much closer to Hart, who appears primed to enjoy a lengthy career, than fellow former teammate Ryan Arcidiacano, who went undrafted in 2016 before tearing up the G League and earning a chance to suit up for the Chicago Bulls (12.7 minutes per in 24 games) late in 2018.

Expect DiVincenzo to hear his name called at some point in the mid-to-late first round. Looking beyond the lottery, I can see him thriving in Milwaukee (17th overall) or Philadelphia (26th overall) in lineups next to point forwards Giannis Antetokounmpo and Ben Simmons. I like his fit with the Utah Jazz (21st overall), especially when Donovan Mitchell is at the 1. He also makes sense for the Minnesota Timberwolves (20th overall), a team searching for wing depth, outside shooting and reasons to embrace small-ball more often. I’m likely higher on DiVincenzo than most. Still, in my opinion, his ability to be a factor in every facet of the game, whether it’s dishing, draining, defending, or dirty-deed-doing, makes him a worthy first-round target.