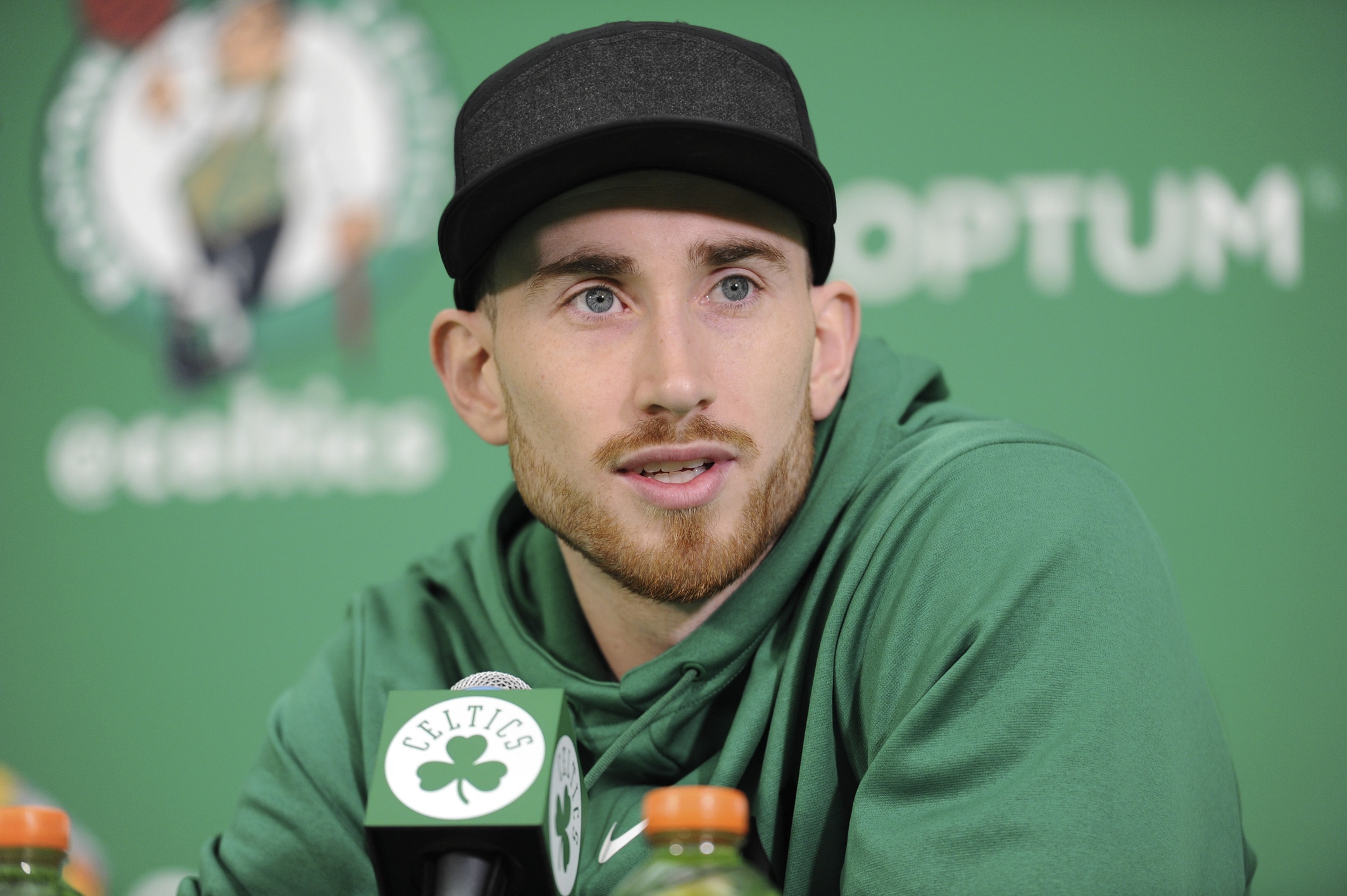 There was a prevailing belief that Gordon Hayward would play another game in the 2017-18 season. Our collective faith in Hayward’s healing powers was, of course, not rewarded. Now, in late June, we can finally see the light at the end of the tunnel and look forward to seeing him on the court again.

“All success,” Stevens said. “Everything is good and pointed toward being back exactly where he was — hopefully pain-free, because that plate is taken out — in the middle of July, which probably points to an early August, mid August fully cleared time frame.”

“It was like, ‘Hey, if you’re having this pain and we need to do this, let’s do it now, right?’ ” Stevens said. “And he was working really hard in Indy and he looked really good. Like, he was getting close to being able to do some two-on-two, three-on-three. But he just had a little bit of pain in the back side of his foot and that’s why they decided to remove the plate.”

Boston Globe: After small setback, Gordon Hayward’s recovery is back on track

For every bit of irrational hope we had for Hayward to return for the playoffs, there seems to be an equal amount of lingering paranoia that he’ll never be the same player again. Just like we were reminded ad nauseam that Hayward was out until the next year, we’ve been told that he would make a full recovery and be ready to go next season. Remember – there was no ligament damage, which is the real ankle killer. I’m not a doctor, but I think history shows that broken bones heal without much issue.

On that note, Kyrie Irving is expected back within a similar timeframe:

Stevens, in extensive interview with Herald, said the hope is for Irving and Hayward to take part when players begin pick-up games in August.

The Boston Celtics will take a second look at Cincinnati guard Jacob Evans ahead of Thursday’s NBA Draft.

The 6-foot-6 Evans will have another workout with both the Celtics and Golden State Warriors this week, according to Tony Jones of the Salt Lake City Tribune. The Celtics own the No. 27 pick in Thursday night’s draft, and the Warriors will pick right after them at No. 28.

Evans, who averaged a team-high 13 points for the Bearcats as a junior, is projected to be a late first-round pick come Thursday night. He started all 36 games for Cincinnati last season, shooting 43 percent from the floor and 37 percent from three-point range.

While his offensive numbers don’t jump off the page, Evans has been praised as one of the top defenders in the ACC.

I guess you can never have too many wings. The only player negotiation the Celtics have to work out this summer is Marcus Smart. Aside from him, they have 12 players under contract (about six wings) going into next season and potentially four first round picks next year.

The Celtics do have four non-guaranteed contracts that they could use to make room: Daniel Theis, Abdel Nader, Semi Ojeleye, and Kadeem Allen. Among them, the only player I wouldn’t think the Celtics are in a rush to replace anyone, although Abdel Nader would have to be the most likely to be cut from the group.

Brown fits the profile of what the Celtics have targeted in the past around where they are picking in the first round: Good all-around on offense, solid defender, tough-minded, gritty and hard worker.

Brown fits in the mold of Avery Bradley, Terry Rozier and Marcus Smart.

The Celtics have a great rotation of guards at the moment, but it’s unclear who they will be able to retain in the foreseeable future. While Irving seems content to re-sign for a fat contract after next season, we have yet to see how Smart feels about taking the qualifying offer. Shane Larkin has proven his worth, and could be priced out of the Celtics’ budget pretty easily. Terry Rozier’s playoff performance could make him a valuable trade piece should the Celtics make an offer for Kawhi Leonard. The league has a surplus of point guards, so there’s no dire need to find another one through the draft, but I’d never turn down another grit-and-grind type of player if Ainge wants to grab one in the late first round.

Finally… a word on Marcus Smart

Stevens naturally wants Smart back: "Everybody in the building would tell you we would love to have Marcus back. Marcus has been great here – a big part of our DNA."

I know, I know, you’ve heard it all before. Marcus Smart is an important player even if he can’t shoot. I still feel like people are underrating the ability to guard every position on defense. Remember when we were pulling our hair out when LeBron James was able to force Rozier into guarding him on a switch whenever he wanted? The Celtics were obviously fine with switching on everything, given the lack of double teams, but it was clear that some matchups were going to be a problem with Rozier on the court.

Smart and Horford are the core of the crunch-time defense, but the switch-everything scheme really works best when you can have five switchy players on the floor at once. Smart’s offense might be replaceable, but his defense is not.

If you watched the Golden State Warriors in these playoffs, the difference in their play with and without Andre Iguodala in their lineup speaks volumes on what a defensive-minded glue-guy can do for a contending roster. Boston has some great talent, but last I checked, they don’t have Kevin Durant to fall back on. Don’t let the end result fool you. The Warriors played some fairly mediocre basketball without Iguodala in the lineup. Houston started to kill them from long range without his perimeter defense, and the frustration mounted into yelling, finger pointing, and shoulder slumping.

98.5 The Sports Hub: Here’s Everyone the Celtics Reportedly Worked out Ahead of the 2018 NBA draft