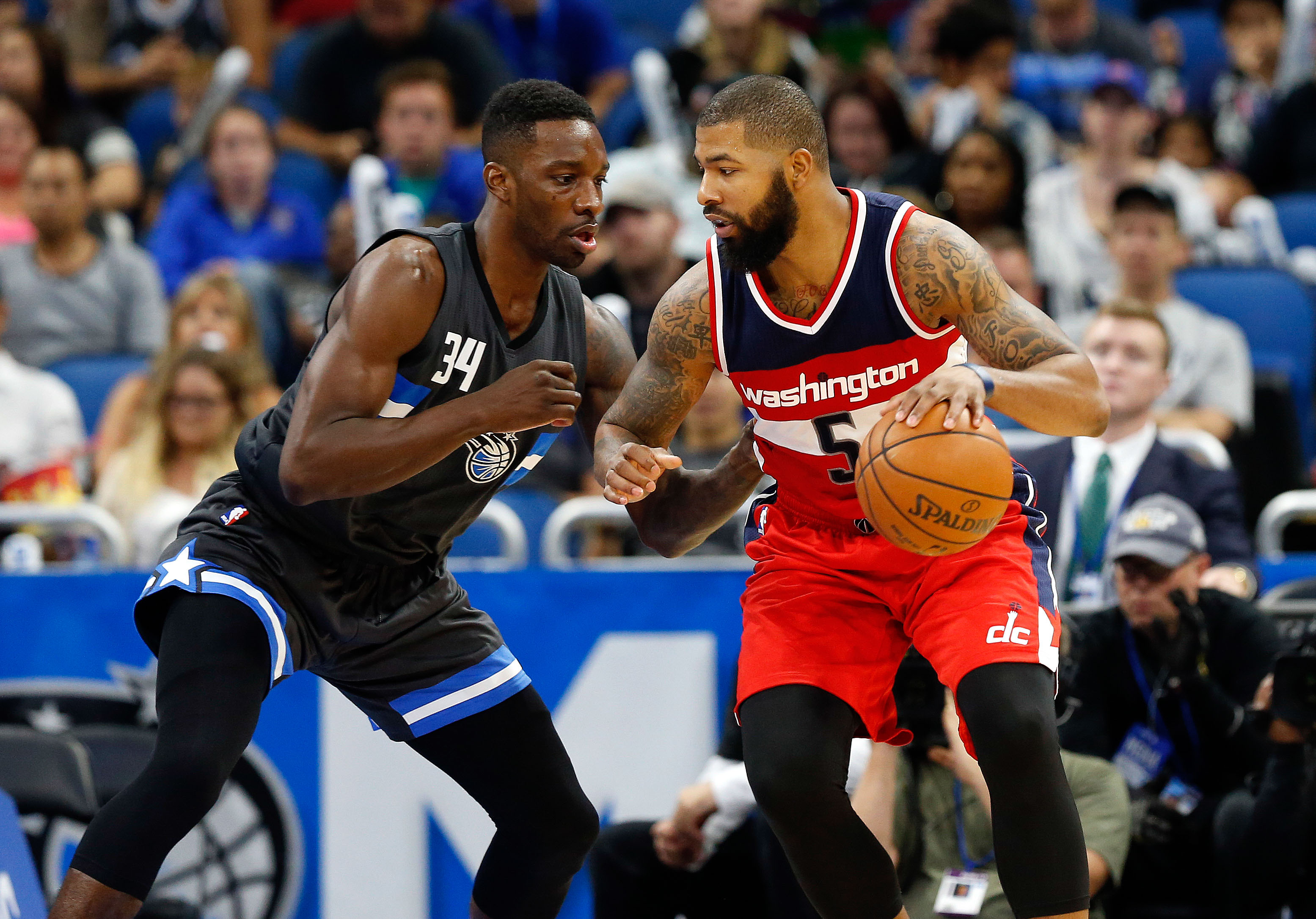 With the Washington Wizards starting training camp next week and preseason next month, it is important to take stock of where the roster stands at each position. Who is the starter, backup, and reserve players? What did they do last year and what should we expect this year. Here are the breakdowns for the point guards, shooting guards, small forward, and centers.

As has been the case for much of his tenure with the Wizards, Morris had an up-and-down performance last season. There were times where he was dominant offensively, grabbing every rebound, and playing physical defense to deter the opposition. That did not happen every game, especially early on when he was recovering from hernia and groin procedures, and was a rare occurrence. Washington was able to redistribute some of Morris’ minutes to the rejuvenated Mike Scott, but his services are no longer available to Scott Brooks.

This season, Morris will not be coming off of any surgeries no any legal battles as was the case last summer. Presumably, that allows him to not have a slow start to the season given he applies himself to the fullest. Playing in foams seemingly do not help the cause when the big has to deal with nagging ankle injuries that severely limit his play like last season in Game 1 against Toronto. Fingers crossed, that should not be an issue given Morris is entering the last year of his bargain contract from his time with Phoenix. Having Dwight Howard next to him should help alleviate some of the responsibilities as a big man on the court. If Morris can consistently put up 14 points and eight rebounds a game, while bringing the Death Row DC swagger, then the Wizards will be able to unlock a greater potential.

Markieff Morris with the UP and UNDER pic.twitter.com/oMqg1K7CAK

The Cheverly, MD native had a bit of a bounce-back season with his highest field goal percentage since returning from heart surgery that cost him the 2011-12 season. With Cleveland facing a 3-2 series deficit to Boston in the Eastern Conference Finals, he came through with 33 points and 11 rebounds between Games 6 and 7 to help LeBron James return to the Finals. Having Finals experience that he can share with the likes of John Wall and Bradley Beal was part of the appeal to finally bring the local star home.

The veteran wing is set to play on his sixth team in four years and his biggest contribution may be off the basketball court. Green is widely regarded as one of the great character men in the NBA that will be a superb presence in the Wizards locker room that had plenty of turmoil last season and could see sparks during the upcoming season, too. Green represents the Trevor Ariza, Paul Pierce, Jared Dudley-type that was missing in recent years. Coming in to spell Morris off the bench is a secondary task in my eyes.

After a stellar shooting season in 2016-17 where Smith reworked his game to fit the modern NBA style of stretch-5’s, he regressed well below the mean. He literally could not make jump shots for much of the season and finished just 4-for-32 from deep after making a career-high 37 threes the year before. Because of the inconsistent shooting and porous defense, Smith quickly fell out of the rotation except when Brooks desperately needed an energy, effort boost when his team was going through the motions (which was often).

Smith is entering the last year of his contract, which he wisely opted into, but he will not get many chances to earn his paycheck on the court. He is at best the fifth big that the team is going to turn to on any given night and with the team continuing to evolve their small-ball lineups, the opportunities will be quite limited. The fan favorite will continue to be one of the highest paid cheerleaders in the NBA during the upcoming season barring a couple of injuries.

Find yourself a friend who has your back like Jason Smith has @JohnWall's. #DCFamily pic.twitter.com/g32IFNcga4