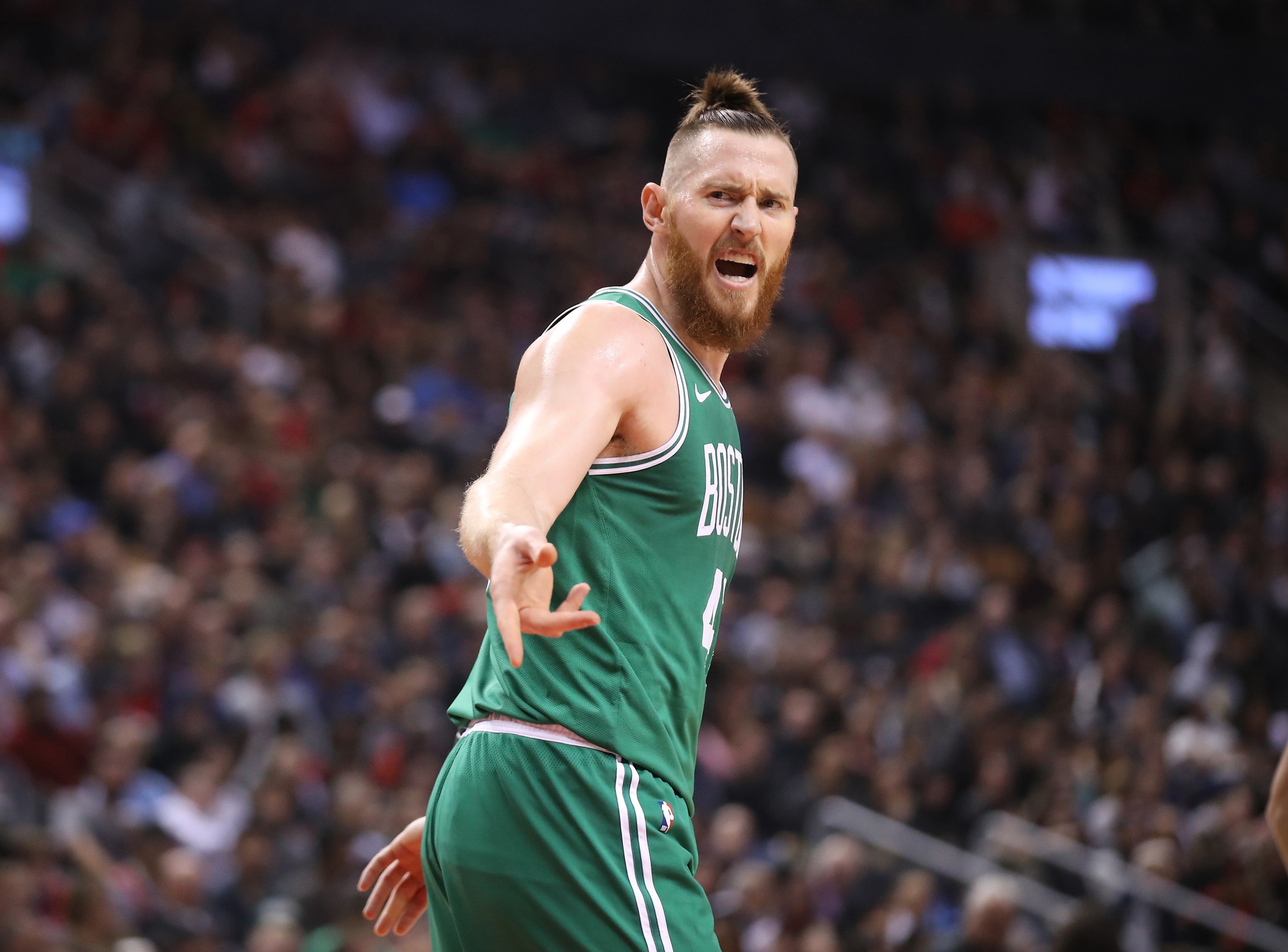 Boston commanded the lead for much of the first half, but eventually succumbed to the Raptors length in the second half. The newly-acquired Kawhi played as though last year’s health debacle in San Antonio never even happened. After a relatively quiet start to the game, he exploded for 22 second half points and ultimately sparked a crucial 12-2 run at the end of regulation to propel his new team to victory.

On the plus side: Gordon Hayward showed a marked improvement when compared with his game against the Sixers, and the Kyrie/Jayson duo looked deadly at times; but the Celtics just couldn’t get it together defensively and allowed a whopping 95 points over the final three quarters to Toronto. You’re not going to win very many games like that, let alone against one of your main competitors in the East.

(Yea, I’m doing a Gordon Watch – what of it? He’s our new toy. Except we actually have had this toy for over a year, we just had to watch him do nothing in the box (not play basketball) this whole time so it makes the first few times playing with him that much more fun. Let us have our fun, man.)

Stop me if you’ve heard this before but Gordon is clearly still getting into form, and that’s to be expected. It started right after the tip when he too-quickly picked up his dribble near the arc, then threw a lazy pass that was easily picked off by the lengthy Leonard. G followed that up with a missed straight away three shortly thereafter, but –on the bright side– he held his own for much of the game on defense. His first test he passed with flying colors, in fact, since he forced a miss from Ibaka after being forced to switch on him in the low block. But he didn’t really get it going offensively until he hit a pull up two in transition in back-to-back plays. His jumper gave him the confidence he needed to get more aggressive, and about a minute later Gordon took the ball hard to the rim against Lowry for a layup.

He played solid all 24 minutes of game time, and Brad purposely held him to 19 minutes for a while so that he could still adhere to the trainers requests of no more than 25 minutes per game AND play him in crunch time when it mattered most. He had his cake and ate it, too. That’s a good sign knowing A) Brad has seen enough to trust him at that time, and B) G gets another confidence boost that with his coach demonstrating that trust in him.

It was a better showing then the first game, and he even showed flashes of the Hayward of old. A few minutes into Q4 he dribbled through his legs, gained leverage on his defender, and attacked the basket with a short blast we’ve yet to see with any consistency from him yet. G was fouled as he finished at the rim, and he hit the FT to inch the Celtics within a possession.

He finished with 14 points (6/13) while grabbing 7 rebounds and dishing 2 assists in just 24 minutes. Check the bottom of this article to hear how great he felt during the second half tonight.

The Game Flow, But Really This Time

Hayward’s errant pass put the Celtics in a brief hole early, but Horford eventually gave the Celtics the lead back after his first shot rattled around the rim a few times before sliding in for 3. Gotta love a good rim job. Later in the quarter he cut into the lane and slammed home a double-handed dunk, PLUS the foul, with a seldom-seen ferociousness.

When he decides to go hard against his defender like that- hooooo-boy, look out below. He picks and chooses his spot because you can’t go full-DadHulk like that every night- it’d be too dangerous. Everyone knows that.

The Celtics defense remained pedestrian. I don’t believe a lot of these ugly mistakes will be occurring much longer, though; things like Jaylen Brown going under a screen to allow a 3 from Kyle Lowry won’t happen later in the season or in the playoffs, so I don’t see our “average D” as reason to worry- yet. The Raptors’ length contested seemingly every shot, but the Celtics went on a 9-1 run to end the first quarter with the lead, 25-18.

Kyrie and Tatum made more of an impact on the boards (3 rebs for Tatum) and passing (3 assists for Kyrie) in the first, but they started to shoot more in the second and ended the half tied for the team-lead with each scoring 9 points on 4 of 9 shooting from the field. Tatum also continued his impressive defensive effort, even after he got beat off the dribble by VanVleet once, his effort never waned. He hustled to the rim and used his elastic-man-ass arms to save him with a well-timed block from behind.

Q2 was fun overall. The Celtics went on a 11-2 run in the final few minutes mostly thanks to staunch defense by Rozier, Morris, Brown, Irving, and Horford. Then the last :14 seconds happened and everyone went crazy for a little. Kyrie hit a beautiful layup, then Horford swatted the shit out of Lowry, who thought he had an easy 2 at the rim. The loose ball goes to Terry Rozier, who fumbles it to a wide open VanVleet, who then drilled the three right at the buzzer. All within :14 seconds, no timeouts. I’d say it was unbelievable if it didn’t make so much sense within this game. The score going into half was now 53-49, Celtics.

Ibaka led the way for the bad guys with 13 points at half. Leonard had only 9 points up at this point, with the bulk of them coming on dribble-drives to the hoop.

Danny Green played his normal part defending his ass off through out the night, but he really popped on offense in the third when he tied the game and woke up the crowd about halfway through. Just about a minute later he’d follow it up with another trey, and the Raptors now had their first lead in what felt like forever, 74-72. You can’t teach clutch, kids.

One of my favorite plays of the night occurred a few minutes later when Tatum stole the ball and passed to Gordon who then hit the deep ball in transition.

Unfortunately, the Celtics weren’t able to regain the lead before the end of the frame, and they went into Q4 down, 82-79.

After scoring just 9 points in the first two quarters, Kawhi Leonard exploded during the third and fourth to ensure his Raptors rarely trailed in the second half. Kawhi looked as athletic as ever and Toronto’s length on the defensive end is hard to beat when your stars aren’t on fire.

The Celtics made it a one possession game, at 101-99, after another Al Horford deep ball fell in with just under three minutes remaining; but Danny Green answered with another clutch three to make it a two possession game once more. The following possession Jayson Tatum was called for a charge and the Raptors were officially on a roll.

Leonard was too hot to be stopped at that point- he finished with 31 points and was tied with Big Al for a game high 10 rebounds. Jayson Tatum nearly grabbed a double-double, he finished with 16 points and 9 rebounds; but he was left with a bad taste in his mouth after he followed up that charging call by going coast-to-coast only to get rejected by two Raptors with about a minute to go. Kyrie had a quiet team-high 20 points, but he’s yet to show that killer instinct we saw so consistently last year, so I think it’s fair to assume he’s not 100% yet and he’ll need a few more games to get there.

The Raptors answered Horford’s timely 3 by going on a 12-2 run to put the Celtics away without a whimper. Final Score: 113-101

Random Notes & Tweets of the Night

-I’ll put money on both Boston radio hosts and National Hot-Take Artists (the only difference being salary and the amount of exposure one gets vs. the other) saying Tatum and Kyrie both “suffered” from there only being one ball on the court during the first quarter. They’ll be saying it all season because sharing the ball isn’t as interesting as playing ball-hog or stat-padding. They had combined for “just” 7 points on six FG attempts, but each added hustle on defense and even earned stats in other columns; such as 3 assists for Kyrie and 3 rebounds for Tatum. The pair wouldn’t be held down offensively for long, though.

-Obviously Kawhi is the big pick-up for the Raptors, but can we talk about Danny Green for a moment, please? The Raptors def only wanted Leonard but were like, “oh you’ll throw in Danny Green, Finals Champion, as well??” – He’s your quintessential 2-for-1 special on pizza when you were going to order out anyway. He’s those extra chicken nuggets that end up in your 4-piece at the end of a late night. He’s that unexpected free alignment that comes when you get a good deal on tires. The point is- you’re still hoping your initial purchase is sound and not a waste of money, but you gotta be happy with the deal when you look what was included in the package.

-Raptors fans- it’s way too early to chant MVP. Mostly because I think you guys were doing it unironically. Stop it.

-Baynes set a couple great screens for Tatum tonight, and there was a high-low play that worked like a charm when Smart found Baynes sealing off his defender and majestically hooking one in.

-Smart is so good defensively we don’t even think twice when he D’s up giants.

Valanciunas is in the fucking DANGER ZONE pic.twitter.com/AxfMkGugWb

-Tatum had another great game all around save for that ugly streak down the stretch. At one point he robbed a man blind by using his go-go extender arms to reach high and swipe a pass out of the sky. Later he showed his maturity by slowing the ball and signaling to calm down when the game started moving too fast for his team at the end of the 2nd quarter.

-Hayward looked good, particularly in the 2nd half, and he said he felt like he got in a zone.

Gordon Hayward said he “found something” in the second half against the Raptors.https://t.co/Cfg97bWpUH