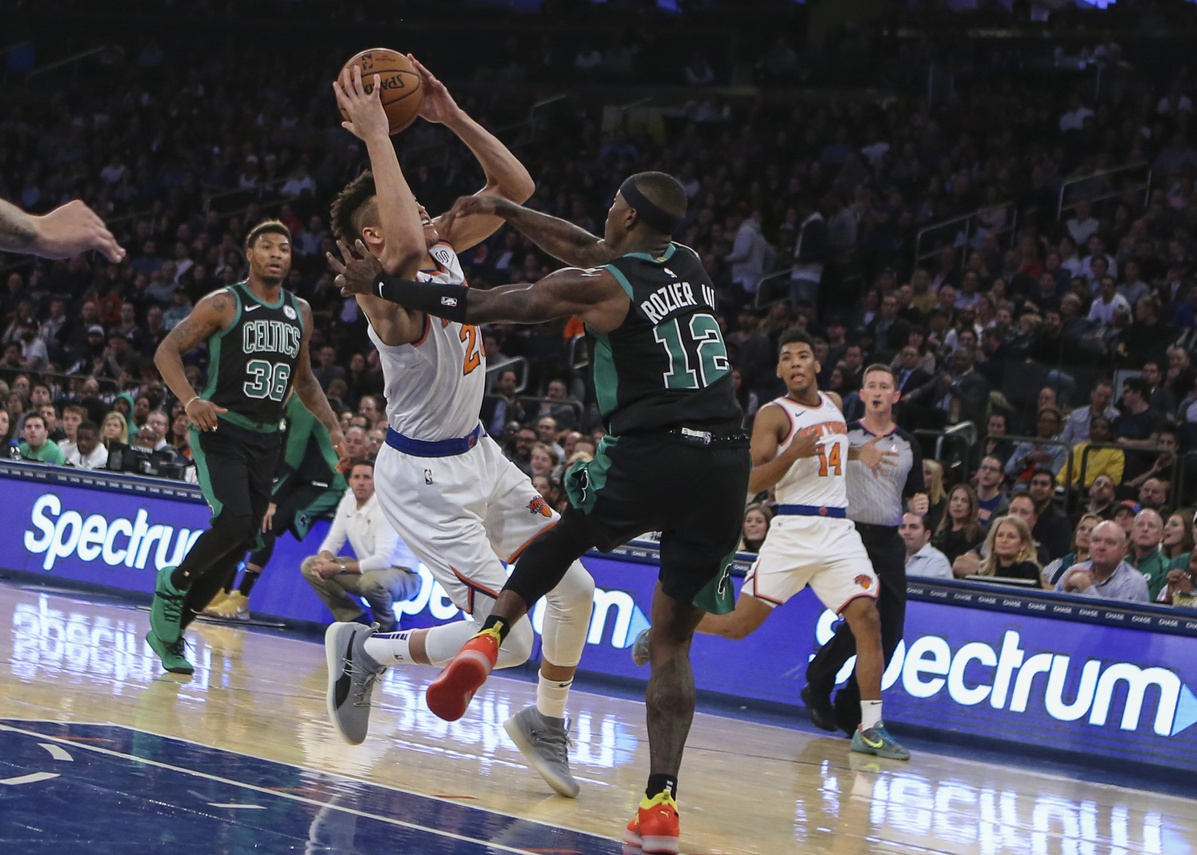 Sometimes others express your feelings in better words than your own. With that in mind I humbly submit the following regarding tonight’s contest between the New York Knicks and Boston Celtics, which they won (albeit not easily, making it more satisfying):

This year’s Knicks, with the possible exception of Lance Thomas and some of the bench bigs who rarely shoot, are all relentless, unrepentant chuckers. From Trey Burke and Tim Hardaway Jr. to Enes Kanter and Mario Hezonja (aka Exhibit A For Why NBA Prospect Nerds Are Sometimes Very, Very, Very Dumb, especially about athletic-looking Euro-white wing players), an All-Irrational-Confidence Second Team is what you get when injury removes near-transcendent star Kristaps Porzingis from the equation.

These Knicks used no clear style of organized offense aside from a few plays vaguely approximating pick-and-roll and a variety of ISOs. The Celtics took full advantage of this throughout the first frame, using tightly organized defensive formations to stifle the Knicks into bad shots—evidenced by their 25-30 percent shooting through much of the game’s first half. On the other side of the ball, Boston ‘s bigs—Jayson Tatum, Al Horford and Aron Baynes (starting in place of the resting Gordon Hayward)—powered the offense.

New York faced a 31-18 deficit at the second quarter’s start and jumped on a Boston scoring drought to get within three. Boston responded with an 11-3 run, generally maintaining control until a few Knicks threes near the very end bringing it to 50-48 Celtics at the half. (I don’t know who the hell you are, Damyean Dotson, but I don’t like you making those cocky-ass threes. Can’t entirely blame the Cs for leaving a relative unknown wide open…but also, like, don’t do that, fellas?)

The only other notable first-half events were unfortunate injuries to Baynes (hamstring) and Knicks blue-chip prospect Kevin Knox (left ankle sprain). Hope both are okay in the long run; neither returned to the game.

Above, a beloved member of #WeirdCelticsTwitter points out one of the Celtics’ notable early issues—Kyrie Irving’s rough-ish first few games. He got double-teamed a lot in this game, but in the Philly game last Tuesday, that didn’t and he still couldn’t hit a damn thing. On the other hand, he dropped 20-plus last night against Toronto.

The game’s third quarter devolved into a slap fight, the Celtics and Knicks scoring consistently back and forth. (This had me imagining which Celtic would triumph in a slap-bet contest; the answer is obviously Marcus Smart. Imagine how hard SMARF would slap that wimp-noodle dude from How I Got Over Your Dead Mother Pretty Easily, Because, Like Seriously, Have You Looked At Cobie Smulders? Pretty damn hard. Then he’d stuff douchenozzle in a locker, naturally.)

Q4 began and the Knicks still hadn’t led at any point despite a handful of ties. Kanter tried to assume whatever version of “takeover mode” a barely-above-league-average, irrationally confident and defensively inept center is capable of. If nothing else, it kept his squad’s energy up enough that the Knicks remained between three to seven points behind the Celtics.

Then Tim Hardaway Jr. scored back-to-back treys and tied us up again. This was the highlight of a 10-1 Knicks run, and I did not fucking like it; it is not my friend. (The Knicks shouldn’t be trying this hard to win games with Porzingis out. At least someone in their front office has to know that, but good luck convincing kazoo-fornicating owner James Dolan of such a plan.)

Things seemed a wee bit dicey. But then:

You get the idea. Anyone who’s followed Kyrie’s style knows exactly how this move works in theory—him splintering defenses through speed and misdirection to roll in past three Knicks for an acrobatic layup. But in execution it approaches transcendence, a galvanizing moment at the perfect time.

The final sequences of this game were serious weirdness tempered by extremely #EroticCity glorious moments: Tatum jammed home a dunk off of a near-turnover from Kyrie that ultimately functioned as a pass (not sure if it counts as an assist), and later rebounded a missed layup to make space for his signature lethal fadeaway jumper. On the other side of things, Burke and Thomas hit well-timed shots and Tatum made a blunder that could’ve forced overtime (fouling Burke on a last-second heave)—but Burke missed his first and third free throws. Then, Horford recovered the loose rock from the post-free-throw scrum to seal the narrow 103-101 Celtics win.

This kid is unreal. pic.twitter.com/RRrkmELJaa

Tonight's @JetBlue Play of the Game: Kyrie somehow finds a way through the defense and gets the and one in crunch time! pic.twitter.com/kTNTFOiPND

Oh, and, in closing: