Your Morning Dump... Where the Boston Celtics offense is still blah 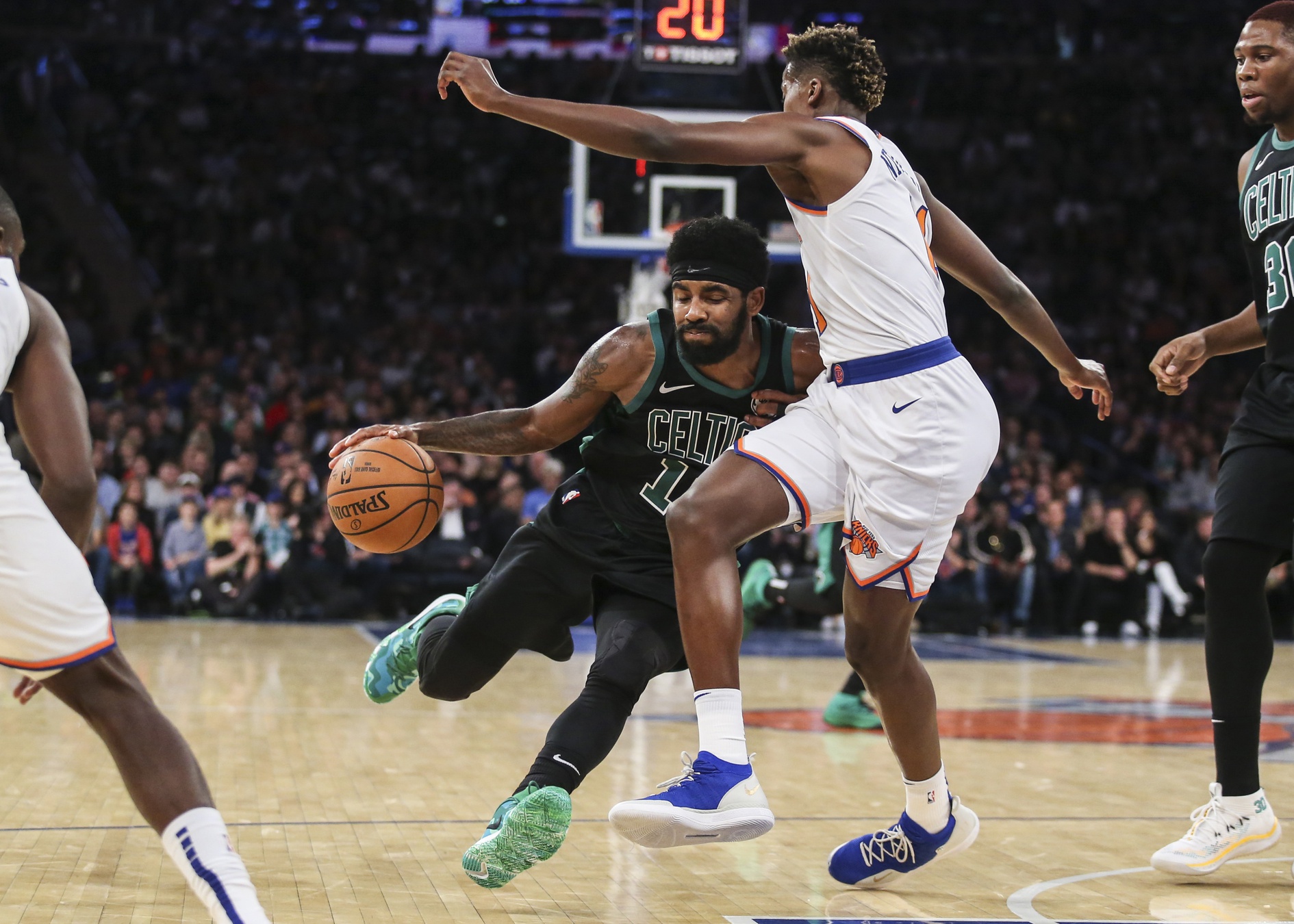 Your Morning Dump... Where the Boston Celtics offense is still blah

The Celtics have been solid defensively overall, and it appears they are leaning heavily on Jaylen Brown to defend the opposing team’s best player. He spent most of the evening battling the burly Kawhi Leonard against Toronto and then was chasing Tim Hardaway Jr. around screens in Saturday’s win.

As a consequence, Brown’s offensive game has suffered. He’s averaging 10.7 points on just 37.5 percent shooting and like many of his teammates, he’s struggling to finish at the rim. The Celtics are converting just 52.3 percent of their shots this season from within 5 feet, which 5 percentage points less than last season.

It’s early, but the Celtics are definitely feeling the brunt of reintroducing two major contributors back into the lineup and then shifting roles defensively. The first week included games with three division opponents, and also a back-to-back set, so Stevens said he’s relieved for the 2-1 record and some perspective on how far his team needs to progress.

Globe: In their first week, Celtics search for offensive rhythm

It’s certainly not time to freak out yet over the Celtics offense, but it has started as a fire without flames. Shot selection remains an issue. The Celtics have taken 20.8 percent of their field goals from between 14 feet and the 3-point arc, according to Cleaning the Glass. Entering Sunday, only three teams have attempted more shots from that area, the trouble zone every coach wants to avoid. Despite trying fewer shots per game from the restricted area than all but six other teams, Boston has only converted a dreadful 52.4 percent of those opportunities. That percentage could be seen as a positive sign that the Celtics are due for a case of regression to the mean, but finishing stood out as a problem last season too. In a potentially related flaw, Boston ranked 26th in free throw rate after Saturday’s game. The Celtics have a slew of capable shooters, but slot 11th in 3-point attempts generated per game. The easiest looks haven’t come easily enough so far.

The Athletic: So far, Celtics offense settling for too many low-percentage chances

There are a few things going on with the Celtics offensively.

1: Kyrie Irving is missing a lot of shots.

He won’t shoot 34% from the field and 14.3% from 3 all year long. Things would look a lot different if Kyrie just hit his averages.

2: Gordon Hayward is being integrated.

Philly Hayward was different from Toronto Hayward and there was no New York Hayward. Some of the mid-range jumpers the Celtics have settled for are because Hayward hasn’t felt 100% comfortable getting to the rim. That will ultimately change.

3: Jaylen Brown has been in foul trouble

Juice is probably the most impacted by this offensive mess. His usage is currently down from 21.4% to 18.3% partly because the freedom of moment effort has kept him off the floor and out of the flow. I think he’s trying to force things at this point (he’s not alone) as he searches for a rhythm.

4: Tatum is finding himself

More on this in the next section, but it’s becoming very clear that Tatum is on his way to becoming an elite scorer in the NBA. He’s not there yet but everyone can see it coming. This feels like that awkward puberty stage where his voice is cracking and he’s starting to turn into a grown man. This is the time in his professional life where he’s just figuring out his powers, which isolates him more, which hurts the flow of the offense.

As I wrote on my Patreon account ($2 monthly unlocks all content), the Celtics are trying to harness a lot of firepower. There is a strong tendency for a lot of players who are very good to isolate their mismatches. When they can figure out that attacking a mismatch doesn’t always mean isolating to score, they’ll start really moving the ball and picking defenses apart.

We spoke about the Celtics offensive issues in the latest Locked On Celtics podcast. Please do check it out.

Page 2: The guys bust Jayson Tatum’s balls (but for real he deserves it and we should watch this closely)

Kyrie Irving, as bullish as anyone in the Boston locker room on Tatum’s ceiling, also playfully chided Tatum about the missed slam.

“He should have made the dunk,” said Irving. “I told him, ‘I can’t dunk it for you, I can only pass you the ball.’ We joke about it, but even when he got the ball back, it was like three people all on one side screaming for the basketball. I was weak side, had my hands up as well like, ‘Yo, what’s going on?’”

A smile on his face, Irving finally threw Tatum a bone.

“He just made an unbelievable move, dream shake, tough shot,” said Irving. “That guy’s just super talented. To be so young, to be so poised, it’s an awesome trait for him.”

Going into the fourth game of the season, a lot of Celtics fans are wondering out loud whether Jayson Tatum absorbed a little too much of that “Mamba Mentality” when he went through summer workouts with his childhood idol. He seems to be isolating more often and settling for long two-point shots when a more efficient option was available.

We shouldn’t be too surprised at his shot selection, though. Look at last year’s shot chart.

That’s a lot of mid-range shooting. You can already see this year’s shot chart filling up in much the same way.

I think the most telling stat right now for Tatum is the number assisted makes versus unassisted.

First, let me say that this is an absolutely minuscule sample size and in no way predictive of the future. It is, however, indicative of the change in his approach.

As the Celtics offense evolves, they’ll figure out how to find Tatum more opportunities off catches. It’s also important to note, though, that the Celtics have been using Tatum as their primary scorer to start second quarters with their B.W.A.

The Celtics have a deep bench but aside from Marcus Smart, they’re not exactly the best passers in the world. So it will be important to keep in mind that the way the Celtics are using him will often lead to more individual play. He’s their safety valve. When the shot clock is at 6 and the offense has stalled, Tatum now serves as the “oh shit we really blew it, here’s the ball now you do something please” guy.

That will put him in tough spots, so there’s an adjustment there as well.

This is all to say that all of this is a giant work in progress. There will be people who are frustrated by it, which is understandable because it’s frustrating to watch. But it’s also part of the growth. They’re good enough to figure it out. The question is always going to be how willing is everyone individually to figure it out… and what happens when the definition of “figuring it out” shifts over the course of the season.

A dream come true for me! The Water Bear version of me met Brian and Stewie! Catch me on @familyguyfox tonight at 9/8c on @foxtv. #FamilyGuy

That Kyrie… he’s always surprising us.

Globe: A museum dedicated to Larry Bird planned in Indiana