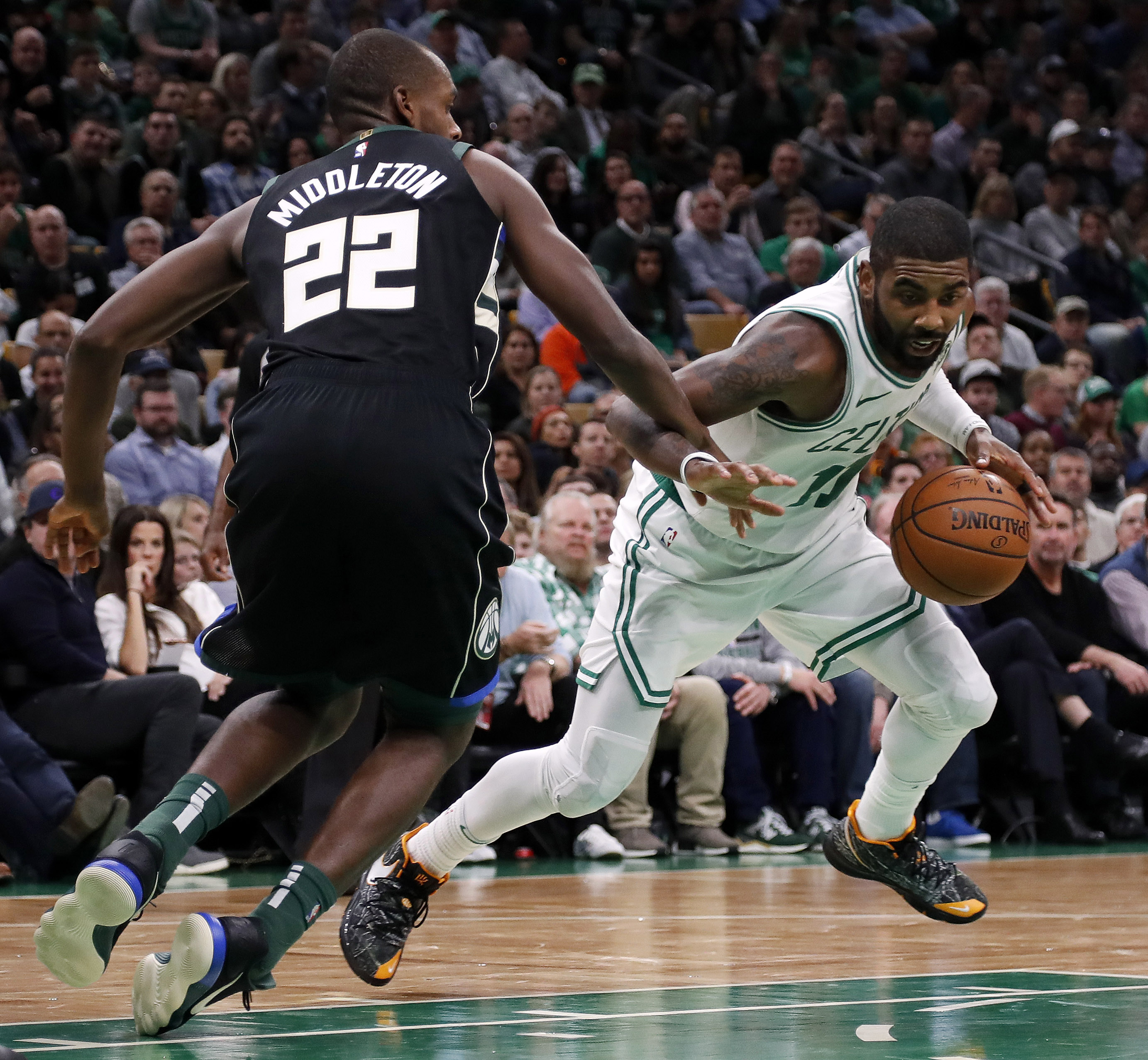 Milwaukee arrived in Boston undefeated on Thursday night, but the Celtics were prepared to shoot the Bucks out of the building- literally. Boston set a new franchise record for both 3PM and 3PA; and, despite Semi Ojeyele making his first career regular season start in place of the ailing Jaylen Brown, the entire starting five finished with double-digit points.

Gordon Hayward scored a season high 18 points and Kyrie Irving had another electric performance (28 pts on 50% shooting, along with 7 assists) en route to a 117-113 win that, frankly, felt a little too close for comfort at the end of the game there.

Gordon Hayward set the tone and was the highlight of the game early, as he started the deluge of three-balls from Boston and gave the Celtics the early lead with a trey. He followed that up with a block on the baseline and then took the ball coast-to-coast before he aggressively drove to the right side of the rim for a physical layup.

The rest of the Celtics followed Gordon’s lead and matched his defensive effort while letting them fly from deep on the offensive end. The formula worked. The team that was leading the NBA in points allowed coming into the game stifled the Bucks offense through the first quarter, ultimately allowing just 16 points. The Celtics led by 7 going into the second, 23-16.

They let their foot off the gas just enough to let the Bucks back into the game during Q2, though. Jayson Tatum went scoreless in the first half, which is acceptable, but he attempted a couple of tough shots early in the shot clock during the second quarter, which isn’t.

On the plus side, Semi made a highlight reel play! It’s the little things for me and him, at this point… He earned the start when Jaylen’s sore right foot ruled him out. Unfortunately, he quickly picked up 2 fouls in the first quarter and was taken out after just six minutes and change; but not before he drained one of his two 3PA, nabbed 3 rebounds, stole a couple passes, and played stellar one-on-one defense on Giannis a few trips down the floor. The sophomore 3&D-man later left his mark on Q2 when he completed one of the more athletic dunks I’ve seen from any Celtics player this year. Al Horford passed to him under the hoop and Semi didn’t even dribble- he just stepped forward, jumped to the other side of the rim, and slammed home the reverse in the face of two Bucks defenders.

Those were 2 of just 12 points Boston scored in the paint during the half, as they continued to rely on the three-ball to great success. On the other side of the coin you had the Bucks, who scored 40 points from close-range and seemingly LIVED in the paint during the first half tonight (they’d finish with 62 PITP). But the Celtics preferred it this way, rather than have the Bucks sharp shooters get hot, and they maintained a 55-53 lead heading into Q3.

Kyrie came out ready to dominate the second half. He banged three straight 3PA almost immediately and propelled the Celtics to a 12-3 run, widening their lead to a healthy margin in the process. The Bucks became so preoccupied with guarding Kyrie at the arc that it opened up the floor for everybody else- eventually, every Celtics player but Marcus Smart hit a three in this game. The Celtics ball movement and hot hands eventually led to them tying the franchise record for most 3PM in a game (18) with over 2 minutes still left in the quarter.

Maybe they were tired from scoring 38 points during the third quarter, but the Celtics gave up a 12-0 run to start the fourth and eventually allowed the Bucks to get back within a possession on multiple instances through out the fourth. Ironically enough, Boston couldn’t buy a three when it really counted: Horford, Irving, and Hayward all missed wide open 3PA that would have made it a two possession game and give the Celtics crucial breathing room in the final minutes. Milwaukee continued to fight until the final buzzer and reminded the Celtics why they have to play a full 48 minutes or risk losing – even when they come within a make of tying the all-time NBA record for most 3PM in a game.

Hayward gets things started for the C's! pic.twitter.com/DZ0lpxCKoH

What a finish by Kyrie! 👀 pic.twitter.com/I7yZOlka7Z

Tatum lobs it up and Ojeleye throws down the #SunLifeDunk4Diabetes! pic.twitter.com/iTbU5rZxhY

Great play on both sides of the ball helps the C's push the lead back to nine! pic.twitter.com/wDT2BEZq2g