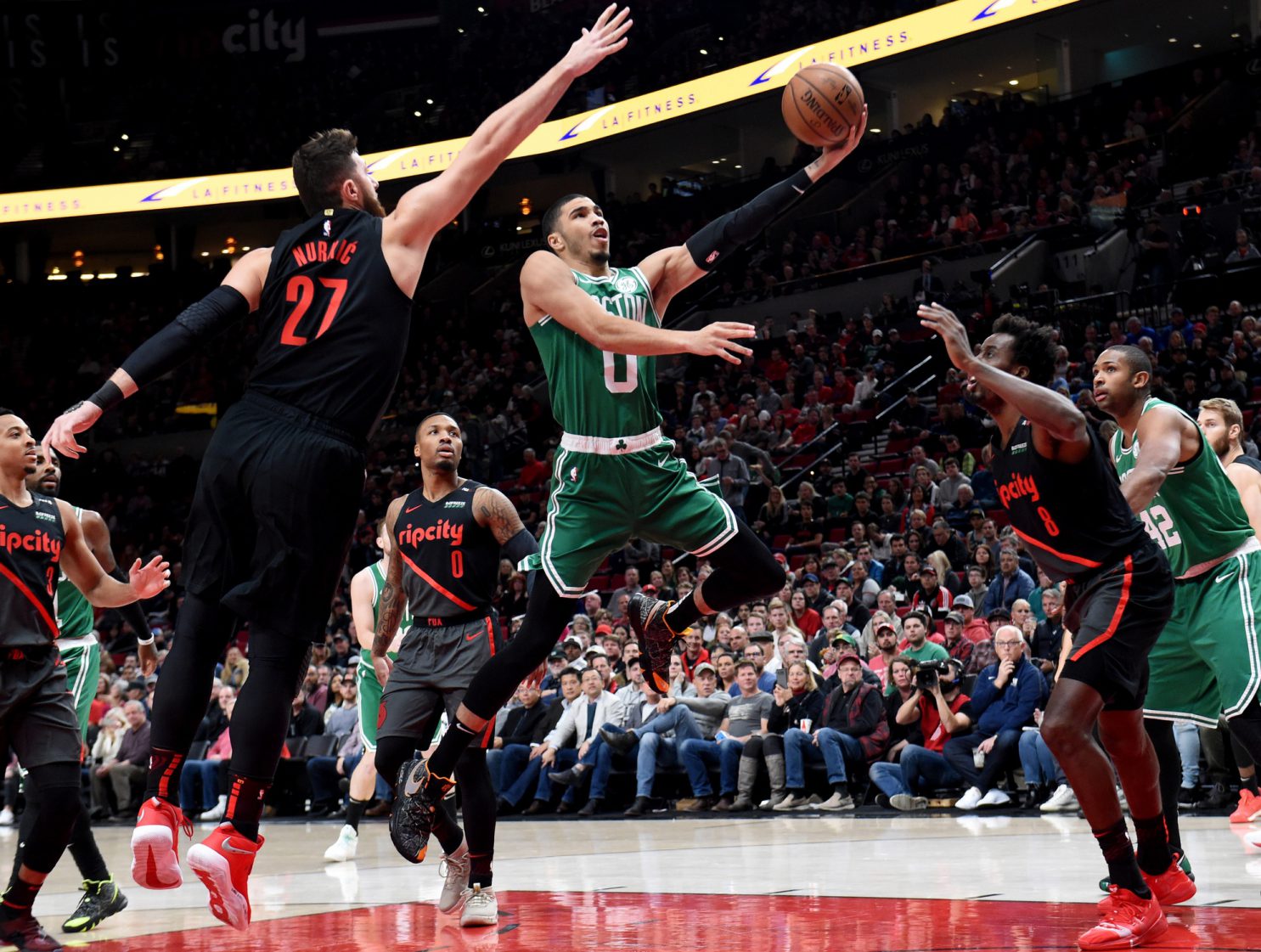 The Portland Trail Blazers are one of those pain-in-my-ass teams that I really like but are always trouble for the Boston Celtics whenever the two squads match up. YOU’RE SUPPOSED TO THINK ABOUT ME, BLAZERS. NOT YOUR RECORD, JUST ME.

[Narrator: They did not think about Liam. The Trail Blazers would win the game despite several strong rallies by the Celtics, who never led.]

Jusuf Nurkic is a man in constant demand of respect—or validation, if you don’t feel like being charitable. (I don’t.) He sulked his way into a trade from the Nuggets team that drafted him (in fairness to him, they were using him horribly, as Nuggets coaches are wont to misuse players) and currently is in a qualifying-offer standoff with the PDX front office. He’ss also an immensely skilled defender at the 5, and in this game, his offense brought the Blazers into a dominant early first-quarter lead against the Celtics.

The fucking eye-poppingly frustrating thing about this is how Nurkic executed this: by running elementary 1-5 screen and rolls with Damian Lillard. Boston’s defense should, given its current and historical defensive pedigree, be more than equipped to handle an offense running off that sort of bread-and-butter simplicity, but NAH. Nurkic ripped through any frontcourt defender the Celtics threw at him, from Al Horford to Aron Baynes and Marcus Morris. Coupled with shockingly open threes made by well documented softboy coward moonlighter-in-eight-boy-bands Meyers Leonard (and, like, well-run plays and shit, I guess), the Blazers ripped through the Celtics in the early running of the first quarter, their lead at times exceeding 10 points. Only a quick run of jumpers from Kyrie Irving, Jayson Tatum and Marcus Morris brought the margin to 26-21 PDX.

Up-and-down was the name of this game, with the Trail Blazers well-equipped to find margins in the Celtics’ defensive sets: This despite a relative paucity of offense from Portland captain Lillard; he knew his shot wasn’t falling and leaned on his playmaking, which was a rollicking success for Portland. Boston’s late-Q1 offensive surge looked more like a fluke with the second half looming, and Portland’s lead only grew larger—nearly 20 points with 3 minutes to go in the half. No attempt at scoring for our heroes seemed to look good or make sense. It took Nurkic’s sudden inability to make layups and a desperate end-of-half play for the Celtics to get a field goal in the last six minutes of the frame. with a smooth Tatum jumper. The score remained 54-37 in the Blazers’ favor.

10:11 p.m. (approx.): There appear to be issues with the basket on what had been the Celtics’ designated goal for the first half. The second half, as you might imagine, should’ve started by now, but now this bizarro shit is happening. Levels and men in flannel shirts are involved, and shockingly not in some experimental noise-rock band serving as the halftime entertainment.

10:26 p.m.: Apparently the rim has received its proper cholera shots and can now be used as it must.

A few breaks went the way of our heroes, finally, to start the last 24 minutes of the game, including an idiotic Blazer turnover/backcourt violation and a 10-0 Celtics scoring run over about two minutes. But the real reason why Boston made what looked like a blowout into a game was a simple combination of maximized effort on both ends of the floor, superstar performances by Tatum and Irving and strong backup from both Marcus Smart (who had a memorable loose-ball-acquisition-scramble)…

…but Portland’s backcourt is what it is—the double-barreled points shotgun of Lillard and future Pulitzer Prize winner (I mean that sincerely, actually) CJ McCollum. The Blazers can always fall back on those two when their wings and frontcourt lose offensive potency (which they often do; I like Al-Farouq Aminu a lot as a player but he ain’t no scorer). The Lillard/McCollum battery brought Portland back into another comfortable double-digit lead despite being pushed to as few as five or six.

As the fourth began it looked like more of the same would continue—that Portland had enough juice to maintain control. I sure as hell thought so. It ended up being guys who hadn’t contributed much offensively, like Smart and Rozier, plus Marcus Morris’s continued run of strong bench shooting, that got the Celtics back in the game. It still wasn’t quite enough, as Nurkic got some of his mojo back and Aminu made threes at the worst possible times for Boston. Even Kyrie shifting into the workings of takeover mode didn’t get the squad over the hole it dug for itself much earlier in the game, falling 100-94 with the only mercy being that this West Coast road trip of hellfire and dogshit is finally over.

At least we got that one Timelord dunk.

A QUALITY TACO: Tatum played outstandingly for most of the game, distinguishing himself as the only Boston player to remain consistent throughout the contest and tying his career-high 27 points alongside 8 rebounds and 2 blocks.

WE NEED TO TALK ABOUT JAYLEN: Something’s up with the man. His athleticism looks fine, as does his energy…not so much when it comes to his execution and shot selection. This run of single-digit scoring performances is disheartening.

WE STILL, LIKE, REALLY NEED TO TALK ABOUT HAYWARD: GH hasn’t looked like a starter on offense since opening night. Defensively he’s pretty good (particularly rebounding), his speed is excellent and using him to run point for the second unit is inspired. But if he is a part of Banner 18, is it weird to think maybe he should try to be Bill Walton rather than Larry Bird?