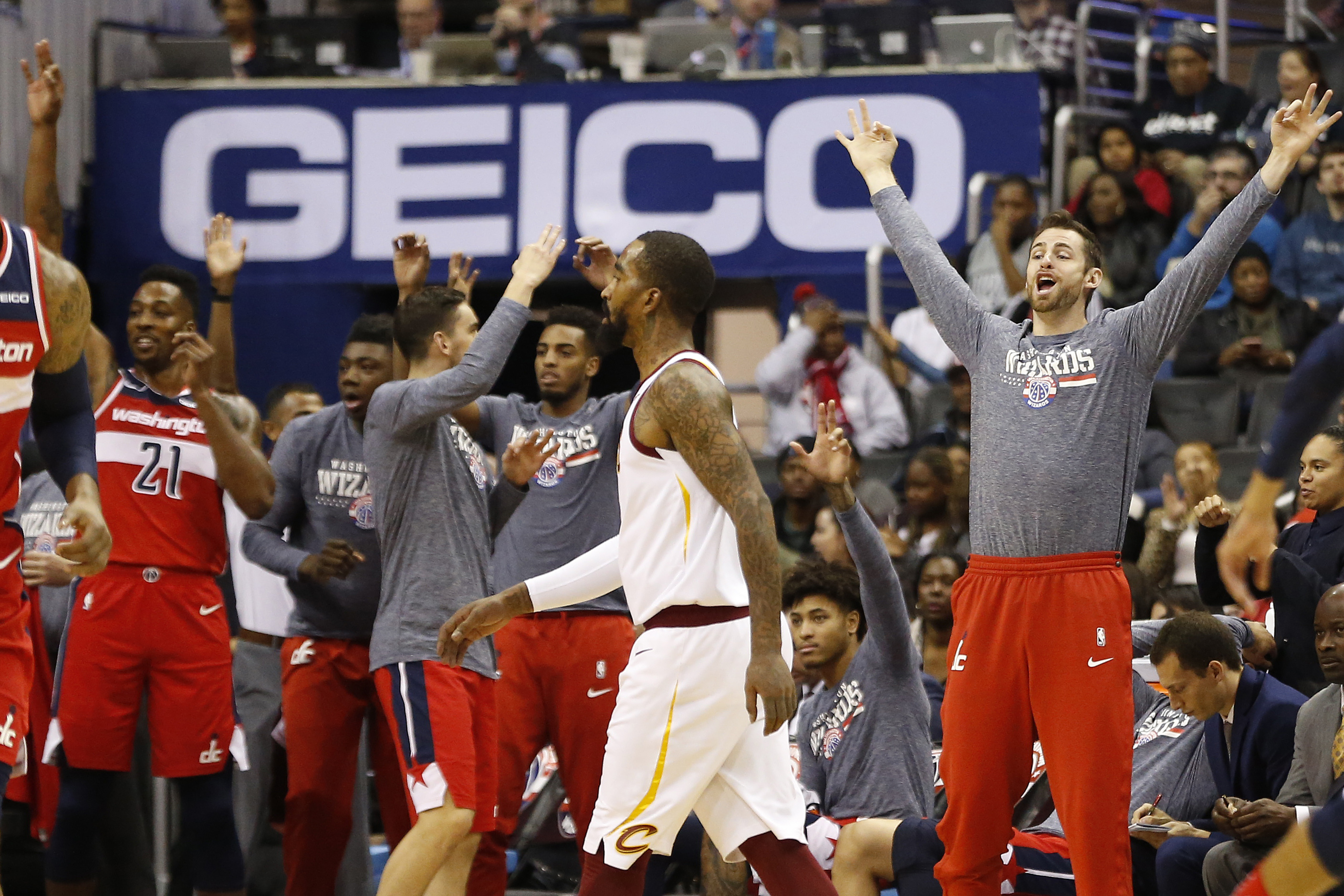 The Washington Wizards defeated the Cleveland Cavaliers, 119-95, on Wednesday night. You can read the takeaways from the game here and check out the post-game coverage below.

Mahinmi made personal history of his own as he hit his first career three-pointer. The moment came with a minute left in the second quarter. Mahinmi has noted from time to time that he’s worked on his three-point shot at practice and he did hit a couple in the preseason. This one he hit in his 10th game of his 11th NBA season was the one that counted.

We knew John Wall gets players paid for getting them open looks, especially from 3. Guess stretch-5 Ian Mahinmi just got paid in advance :/ pic.twitter.com/sWjHhWSHuW

First, he was asked if this was the top moment of his career.

Mahinmi: “Give me a couple of years and then I think it’ll be up there.”

“It felt good. You know, it felt good. Obviously, I was looking for it and you guys have seen me after practice, it’s something I’ve been working on. Been working three’s, especially the corner so it’s good to finally see one go in.”

Ian Mahinmi on hitting his first career three-pointer: “It felt good. Obviously I was looking for it and you guys have seen me after practice, it’s something I’ve been working on. Been working on there’s, especially the corner so it’s good to finally see one go in.” pic.twitter.com/HqXRCrNKaU

Beal was beyond happy for his fellow teammate for joining the three-pointer club but was surprised to learn that this was the first ever three-pointer Mahinmi had made after the media made him guess how many three’s he hit in his 11-year career.

Beal: “Really? Like I’ve said to him at practice before keep shooting. He knocks them down so we want him to shoot more three’s”

Early in the game, Dwight Howard caught an alley-oop pass from Wall and showed off the Dwight Howard vertical leap we’ve seen him do in the past on other teams.

Beal hopes to fed Howard more of those as the season progresses but it’s still relatively early until he adapts to throwing lobs to Superman.

“I think I threw a bad pass earlier but I told him a couple times, ‘I don’t think I’ve ever played with a guy to throw a lob to so you have to bear with me’. I’m trying to pick my spots to get it to him. Throw it high, throw it low and for the most part he’s getting his legs back in rhythm. It was good to see him show that bounce.”

Bradley Beal says it is an adjustment playing with Dwight Howard just because he isn't used to throwing lobs to bigs pic.twitter.com/fCkM9HQitF

Last year’s Wizards would lose to teams like the current LeBron James-less Cavs but not Wednesday night. It was a game they dominated from start to finish, however, the last thing Beal wants is to get complacent. There’s still plenty of season left.

“It was great. To be able to come out and get a lead and be able to sustain it and maintain it throughout the game. We still have a lot of work to do – we still have to get better. We’re still not content with where we are. We put three [wins] together, but we still have a couple more at home that we have to take care of.”

Although the #Wizards have won three games in a row, Bradley Beal said now is not the time to get content and there is still room for improvement. pic.twitter.com/y2OVquTYnK

Beal elaborated more when he was asked if this win felt different than the other ones. Granted, they recently beat a young Knicks team and although they fell short to the Magic last Friday in Orlando, they got the dub in the revenge game Monday night.

“I guess you could say that. It’s basically just putting a complete game together. We still had some mishaps and some things we need to get better at…For the most part, we played pretty well. We rebounded well, defended well for the most part – everything can always get better though. We just continue to let our offense take care of itself by moving the ball. Overall, it was a great win.”

More Beal: “It’s basically just putting a complete game together. We still had some mishaps and some things we need to get better at but for the most part we played pretty well. We rebounded well, defended well for the most part. Everything can always get better though.” pic.twitter.com/YC8Jv9gPgA

More on that alley-oop where Dwight Howard showed his hops, he hopes it’s the first of many. Howard missed training camp, the preseason and the first seven games of the Wizards season with a butt injury. He hopes his legs get to 100 percent soon. He also reiterated a phrase that should be put on T-Shirts and sold at Capital One Arena, “Nobody’s gonna remember November” which will be the Wizards rallying cry as they right the ship after entering last Saturday’s contest with the Heat sporting a 3-9 record.

“It is getting better. It is getting better. The guys, Brad [Bradley Beal] and John [Wall] and Keef [Markieff Morris] were talking about that tonight. Me getting my legs back and what that would mean for everybody, so I am going to stay in the weight room, continue to get healthy– Superman that oh–try to get myself in the best shape possible to really help this team out. My trainers have been doing an amazing job, the staff here have been doing a great job as well, so trying to get my legs back. I am glad that we are winning some games and I think that we are really going to turn this around, and I am going to keep saying that nobody is going to remember November.”

Dwight Howard talks about his vertical slowly getting better.

Howard’s thoughts of this game was that the aggression on the defensive end was the difference. Howard was tied with Kelly Oubre Jr. for the team lead with seven defensive boards.

“I think tonight we did a good job of coming out and being very aggressive on the defensive end. We got a lot of stops early which allowed us to get a pretty good lead. I think we have to do a little better job in the second and third quarters of coming out when we have leads, and trying to close the game out. We cannot worry about who we are playing. We have to worry about how we can get better every single night. I thought tonight was good from beginning to end.”

Dwight Howard: “I thought tonight we did a good job of coming out and being aggressive on the defensive end. We got a lot of stops early which allowed us to get a pretty good lead.” pic.twitter.com/WEcCC7g8aj

We all know that Otto Porter was off to a sluggish start this season. It was bad to the point that Wizards head coach Scott Brooks didn’t play him in the fourth quarter the previous three games entering Wednesday night. This game against Cleveland saw the version of Porter the Wizards envisioned him when they selected him as the third pick in the 2013 NBA draft. Porter was the team’s second-best scorer finishing with 15 points on 7-of-11 shooting and one of three from beyond the arc in 26:14 minutes of play. Brooks praised his performance after the game. Porter’s best quarter came in the opening 12 minutes, finishing with 11 points. Brooks dismissed the idea that he doesn’t play Porter because he stinks or that coach doesn’t like him. It’s really all a matter of who’s hot when it comes to late game rotations.

“It’s about sacrificing. It’s not about who’s playing, who’s not playing, who’s getting shots, who’s not getting shots because some nights are gonna be different. Otto got a bunch of shots in 25 minutes. He didn’t get many shots the last game. It’s about playing the right way and sacrificing… Otto is a guy that sacrifices… He cares about winning and he’s not gonna complain and I like that about Otto. He’s not gonna complain, he’s just gonna do his job and come out and play every night and try to do the best he can.”

Otto Porter did not play in the previous 3 fourth quarters despite close games. Scott Brooks came to his defense after the blowout win over the Cavs: "Otto is a guy that sacrifices. … He cares about winning." pic.twitter.com/GFfh6UfRwe

Brooks also gave praise to the defense, who forced 24 turnovers for 29 points, totaled 17 steals and had 32 rebounds on the defensive glass. They also had 20 deflections.

“That was the difference. Whether they were tired, back-to-back and had a big win last night at home but we got our hands on a lot of basketball. It’s probably–I don’t know the numbers right now–it’s probably our highest deflection game on top of all of our steals and creating turnovers. But it was a good defensive game for us. We kept a team under 100–I don’t know if we have this year, or maybe once, I think. It was a good way to finish the game also when you have a 20-point lead. You want to continue to play the right way, and I thought our guys did.”

Brooks on the defense: “That was the difference.” pic.twitter.com/KIkgf3dnJH

Every starter except John Wall finished with double figures, and the entire bench scored. Although Wall had an off night shooting he still did an effective job sharing the ball leading the team with nine assists.