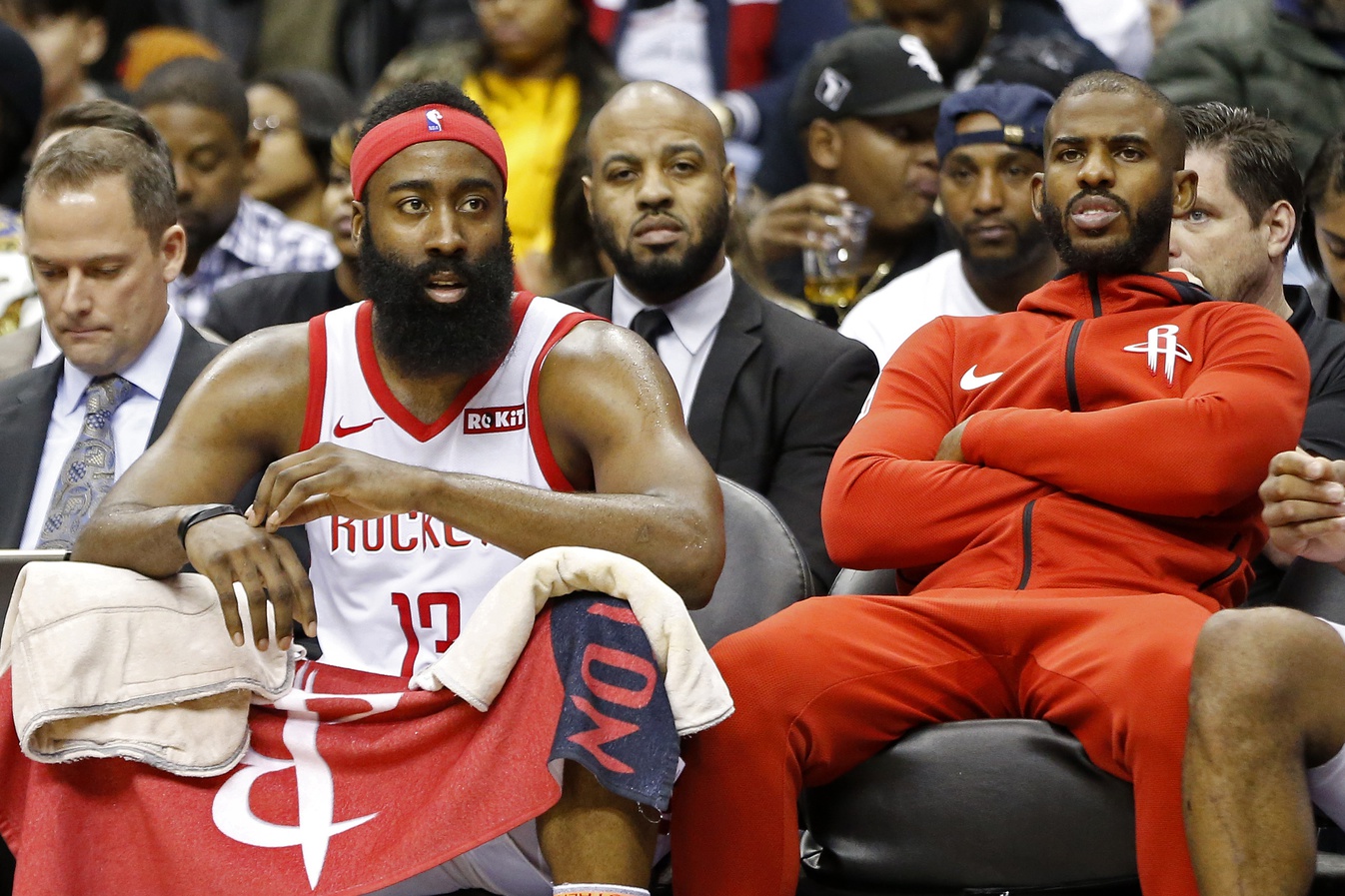 The Detroit Pistons played their 21st game on Monday night, which means that all 30 teams are officially in the second quarter of the regular season. Not even the octopus that picked a perfect bracket could’ve predicted how the first fourth (and change) of the 2018-19 NBA season would turn out. If the playoffs started today, only eight of the 16 clubs that made the postseason in 2017-18 would qualify. The Western Conference is one giant wedgie, with the top-seeded Denver Nuggets just five games ahead of the 13th-placed Jazz. The Eastern Conference appears to have 10 teams in the hunt and five already eyeing Lord Zion.

As returning readers are aware, the Powerless Rankings typically feature the teams on the outside of the playoff picture while ignoring the 16 squads slated for the postseason — and this edition is no exception.

Spoiler alert: In a new wrinkle to this series, I’ve used clips from The Sopranos to help tell the stories of these squads.

*All stats, unless otherwise noted, are from NBA.com, but do not include Tuesday’s five-game slate*

He is Robert Covington, and he has turned the tide for the Timberwolves, who have won seven of 10 since Big Stop Bob entered the lineup. Covington is Plus-980 in 2018-19. That is no typo. If you combine the second, third, and fourth-placed players in Plus-Minus they still come up short of Covington. (Danny Green Plus-292, Pascal Siakam Plus-228, Kyle Lowry Plus-225, Giannis Antetokounmpo Plus-204 equals Plus-949). You go, RoCo, you go!

Monday’s matchup with the Clippers is an example of the Pelicans for much of the Anthony Davis Era. A double-digit deficit, compelling comeback, and in this case, a tight loss for New Orleans. The Pelicans’ pace means no lead is safe (for either team). No matter the score, you better not change the channel. New Orleans fills it up (and can give it back on the other end) fast!

New Orleans was 20-20 through the first 40 games last year before winning seven of their next eight. But DeMarcus Cousins tore his Achilles in the last contest during that stretch and New Orleans proceeded to lose five of six. Then Nikola Mirotic arrived and the Pelicans ended the campaign in style, winning 20 of the final 28 regular season games before sweeping Portland and stealing a game from Golden State in the second round. 2014-15, the first year Davis tasted the playoffs, was a rollercoaster as well, with a win over the Spurs on the final night of the regular season clinching their spot.

Not surprisingly, the Pelicans have been inconsistent once again in 2018-19. Four wins in a row to start the season. Six straight losses. Six wins in seven games. Four-game skid. And 2-2 in the last four, plus a tough schedule looming. Nevertheless, I implore you to close down the trade machine, live in the moment and be patient! (Boring, I know, but let Dell Demps worry about all that.) Just sit back and enjoy Galactus and the Silver Surfer as they try to break through in the crowded Western Conference.

The Rockets are a little bit like Junior Soprano. Uncle June’s stint as the boss was very short-lived, and truthfully, in title only, as Tony orchestrated the operation behind his back. Houston reached the top, at least during the regular season last year, and came oh-so-close to dethroning the Dubs in the Western Conference Finals. Jump to 2018-19 and their formerly suffocating switching defense makes sieves seem strong. Has Houston fallen off?

James Harden is still doing James Harden things. Chris Paul keeps cooking. Clint Capela continues to set screens, roll to the rim and deny drivers. But Paul, for as fine a wine as he is, isn’t getting any younger.

Without defensive reinforcements, it’s doubtful Houston will be as tough an out as they were last year come playoff time.

Utah’s defense is off to a slow start (13th in DRating, 107.7), and the offense has been awful (27th in ORating, 105.1). Many experts expected the Jazz to fight for home-court advantage and take another leap toward true contention after knocking out Oklahoma City in the first round of the playoffs.

But here we are singing the same song: Coach Quin Snyder, for all the credit he receives for being a mastermind who could play the bad guy in any movie, regardless of genre, won’t quit the Derrick Favors and Rudy Gobert pairing.

A starting five with Ricky Rubio, Favors and Gobert leaves Donovan Mitchell without enough studio space to make sweet music. It has been time to pull the plug on the Favors-Gobert starting duo for years, but now it’s a necessity. Toronto is a good role model: After starting together on a nightly basis in the past, Jonas Valanciunas and Serge Ibaka have shared the floor for just 12 minutes this season. The numbers suggest the Jazz do something similar. Favors is not Jaren Jackson Jr. To all this, Snyder (probably) says:

The Nets have a young star in the making, never mind that he’s injured. No injury ever stopped Caris LeVert before, and he possesses the perspective and heart of a champion both on and off the court.

I am not here to suggest that LeVert’s injury, which I still have not watched (and do not intend to watch) because I’m squeamish, is a blessing in disguise.

With that being said, the Nets, losers of seven straight, will in all likelihood walk away with a much better draft pick next summer, since they actually still own their own pick for the first time since ‘Nam. As such, I remain more optimistic than most about Brooklyn’s long-term outlook.

In classic Kings fashion, the moment they have a coach who’s connecting with the players and producing wins on a regular basis, he’s somehow on the hot seat. Vlade Divac does remember that he traded their first round pick and have no incentive to tank, right? The front office does know that Marvin Bagley is buying into his bench role and that it’s probably best to bring him along slowly, right? Mike Malone should treat Dave Joerger for lunch the next time Sacramento comes to Denver, that is if Joerger lasts that long.

Livia Soprano isn’t surpassing speed limits like star point guard De’Aaron Fox and the Sacramento Kings’ fast and furious offense. However, firing Dave Joerger would be a little bit like running over a dear friend in their own driveway. At least Livia’s blunder, though more serious, was accidental.

I still believe it’s likely that both Dallas and Atlanta “won” their draft-day trade. And that both teams have bright futures. My main beef with the Hawks thus far is coach Lloyd Pierce’s penchant for keeping Trae Young on a short leash lately. After playing 30-plus minutes in eight of the first 11 games, Young has seen less than 30 minutes in nine of the last 13. Moreover, Trae was limited to 19 and 22 minutes in recent losses to the Boston Celtics and Toronto Raptors. The Wire remains the best television show ever (don’t @ me), and Michael K. Williams delivers the punchline I’m looking for here:

Even though New York is bad again this year, it’s actually acceptable since Kristaps Porzingis is recovering from a torn ACL (and the Knicks didn’t trade away their first round draft pick, which always helps). This is allowing Knicks fans to enjoy the ride and cherish the little things. The team has been surprisingly competitive, making it easy for the fans to get into the games. Whether Noah Vonleh or any of the other young players on short-term deals will be valued as long-term building blocks or not, only time will tell. It’s possible they end up being re-gifted like Rocco DiMeo’s jacket.

Miami is a middling team, nothing better, nothing worse. The surging Josh Richardson and the young Bam Adebayo are enough to keep this team out of the bottom-five, and there’s no reason to doubt their ability to earn a playoff spot in the weaker conference. Pat Riley would never abandon ship. Miami Heat basketball runs through his veins. But I could see him saying this:

Gregg Popovich is out here critiquing Kawhi Leonard’s leadership (or lack thereof), complaining about the direction the league is heading (three-pointer hater), and coaching a team that ranks second-to-last in Defensive Rating (112.4). Even if the Spurs beat the odds making mid-range jumpers and sneak into the playoffs, San Antonio’s reign of dominance is done. It’s either sad or sweet depending on where you live in the Lone Star State. Here’s to hoping these three clips encapsulate the Spurs as well as I think they do:

Phoenix is the only bad basketball team in the entire Western Conference. It’s a wonder they’ve actually won three games against the conference (Spurs, Grizzlies, Mavericks), and that their fourth (and most recent) win came against the Bucks. Despite the offensive brilliance of Devin Booker and Deandre Ayton, the Suns have been reduced to teenage A.J. Soprano. And without Booker on Tuesday, the Suns scored nine points in the first quarter.

We’ll see whether Wendell Carter can eventually cover for Lauri Markkanen on defense, or if the Bulls can get lucky in the lottery. If the answer to both of those questions is no, this team will likely be years away from being a few years away from competence.

Washington narrowly avoids the honor of most powerless (or least powerful, if you prefer) because we’ve seen them not get along and/or get off to slow starts before only to figure it out and ultimately reach the postseason.

Nevertheless, the Wizards have been quite the shit-show soap opera, and the weight of John Wall’s and Otto Porter’s contracts are starting to overwhelm. Livia eloquently sums up Bradley Beal’s (and every Wizards fans’) mood:

Olive oil is the foundation of a good meal, just as the team owner sets the course for a franchise. You want your olive oil to be cold-pressed and extra virgin and if it’s not, it’s weak. The difference is visible. One is dark, rich and aromatic, the other clear and bland. Which is to say the Cleveland Cavaliers are a really crappy olive oil, a see-through, heavily hydrated urine sample.

And of course I’d be remiss to bypass the commentary on Hillary Clinton, whom LeBron James (and the majority of Americans who voted) supported while Dan Gilbert hosted her opponent. We can point to the Cavs trading Kyrie Irving (or J.R. Smith forgetting the score) as the moment that signaled the end of LeBron’s second stint in Cleveland. But I’ll bet it was a decision based on much bigger things than basketball. The proof is in the olive oil.