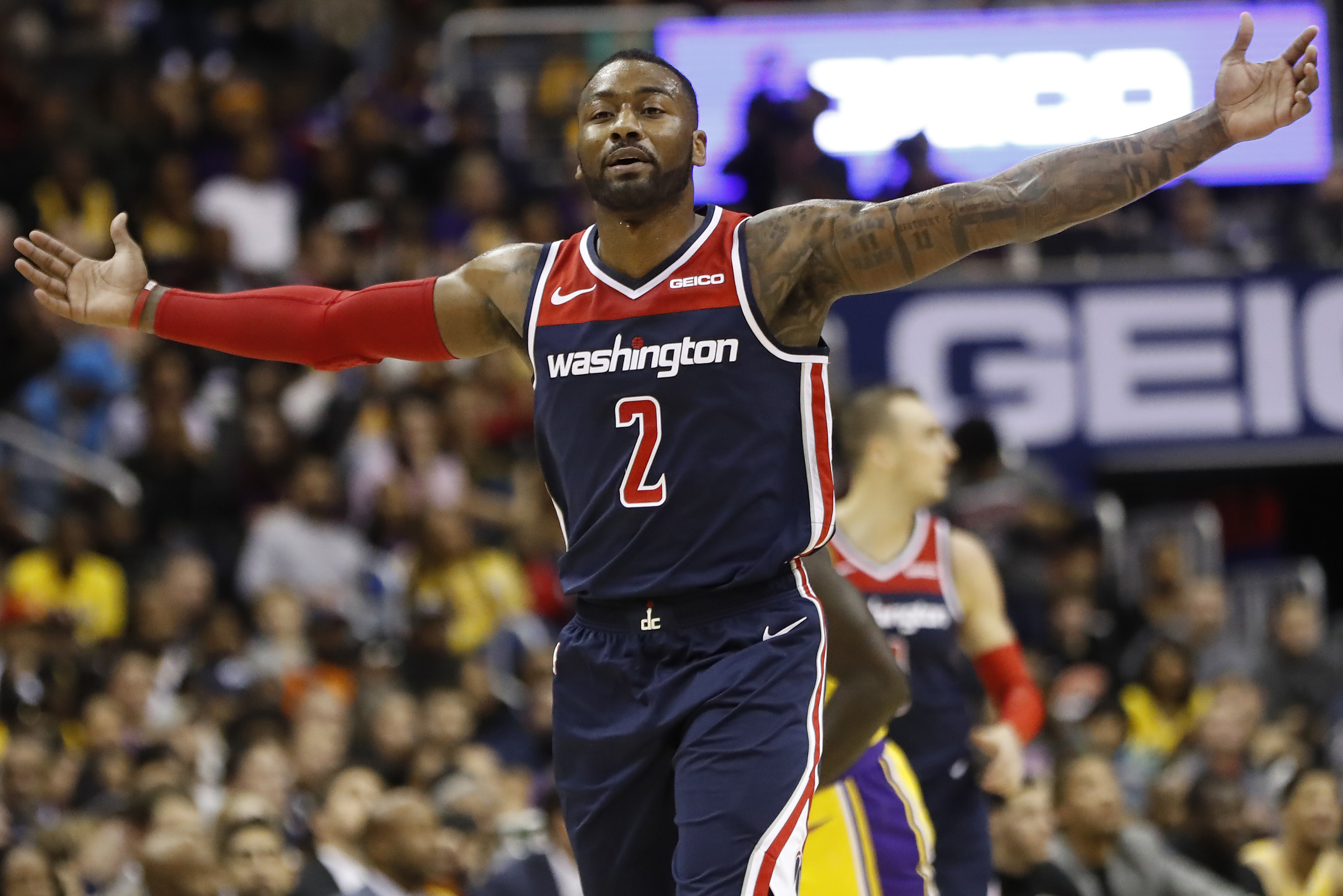 The Washington Wizards were on a four-game slide and mentally a little wary after a roller coaster ride of a trade. That seems like the perfect time to face off against the best player in the NBA. LeBron James came to D.C. having won and dominated in the last six matchups when the Wizards were at home. No one, certainly not Scott Brooks, will forget the 57-pointer last season or the incredible overtime-forcing turnaround bank three-pointer the seasons before that. But, taking a line out of last season’s playbook, the Wizards put together one of their best games of the season right when their backs were up against the wall.

Speaking of walls, John Wall had his best game of the season with 40 points on 16-of-27 shooting (59 percent) including 4-of-8 from deep to go along with 14 assists in 42 minutes of play. Moreover, Wall was active on the defensive end. Besides six rebounds, three steals, and two blocks, the point guard passed the eye test for his effort. He was hustling and being aggressive on both ends of the floor, which is something we have not consistently seen from Wall this season. When Wall is playing like the five-time All-Star that he is, everything else just seems to fall in line. His teammates feed off of his effort when he is leading by example. Even when Bradley Beal is having a cold shooting night, 5-of-16 in the first half, Washington is a formidable team when Wall is playing his best on both ends of the court.

“When we play with that type of energy on the defensive end, we can get out on transition where he is one of the best,” Scott Brooks said attributing Wall’s big offensive night to the other end of the floor. “He’s making shots, he’s making attacks, he’s passing the ball. It all starts with our defense. Our defense in that first quarter was really good.”

“He dictated the game,” James said about his friend. “He had energy and we did not. He kept us on our heels all night. John [Wall], that is what he is, one-man fast break. He is up there with [Russell] Westbrook when it comes to that, so he had us on our heels and he saw a few layups go in transition, then his jump shot started going and you are not going to stop him when he does that.”

This quote from Brooks was the most telling and accurate of the night.

“He’s obviously the key,” Brooks continued on his point guard. “Him and Brad [Beal] are the key, they are the best players, they are All-Star players, but they need to bring that energy every night. It goes on them and then our roles players need to be stars in their roles. That’s what makes good teams go. We have been banged up, we are playing different lineups but that is no excuse to play hard. That’s your job, you have to do that. Hopefully, this type of game can get us to do that consistently.”

That Los Angeles was playing on the second night of a back-to-back and missing a few rotation players helped, but the reason that the Wizards were able to dominate from start to finish was the total team effort they got to complement Wall’s performance. Starting with the little guys who probably won’t get much love. Rookie Troy Brown Jr. played 15 minutes and did not score, but made hustle plays with three steals in the first half. This comes from a young man who just played with the Capital City Go-Go on Saturday night in Chicago and did not depart from the Windy City until early Sunday morning, less than 12 hours before the Wizards played the Lakers.

Tomas Satoransky also balled out despite scoring just 11 points. He played a career-high 46 minutes, including the entire second half, because Washington was extremely short staffed in the backcourt after trading away Austin Rivers. As everyone from John Wall to Bradley Beal to Scott Brooks has said before, he hustles and makes the right play all the time. The Czech native had five assists, four rebounds, and three steals to go with some spirited defense against LeBron James. “He just plays hard,” Brooks said again after the game. “When you look at it, he had seven shots, but he had five assists and he’s plus 16. He just plays hard. That’s what I love about him.”

With Otto Porter continuing to miss time with a right knee contusion from the Pacers game where he banged knees with Myles Turner (which will require an MRI on Monday), Jeff Green started for the Wizards and played well. Aside from his 20 points on 8-of-15 shooting including four triples and 7 rebounds, Green had the impossible task of guarding James for most of the night. To his and the rest of the team’s credit in help defense, James was held to just 13 points on 5-of-16 shooting, which every team would take every day and twice on Sunday. For his career, James has averaged 26.9 points, 7.7 rebounds, and 7.2 assists against Washington and the Wizards held him to his lowest scoring performance against them in his career in the 65th matchup. A lot of that is a credit to Green (who Beal, somewhat hyperbolically, compared to James earlier this season) who is able to match the physicality, size and speed of LeBron better than anyone else on the team. Heck, it was probably a good thing that Porter did not play because James has regularly gotten the better of him in recent years.

Finally, the new guy. Sam Dekker has been nothing but brilliant in his short time with Washington. At the end of the day, giving up a second-round pick to shed Jason Smith’s salary and take a chance on a high motor player was probably a very savvy move by Ernie Grunfeld and his staff. In his previous three games with the Wizards, he had just seven points in 32 minutes. On Sunday, he had his best game of his short stint with the team with 20 points on 10-of-15 shooting, five rebounds, four assists, and three steals in 22 minutes of play. Pretty solid for a guy still on a minutes restriction because of an ankle injury that sidelined him for over a month in Cleveland.

I am not sure how much playing time he is going to be able to get once Otto Porter and Trevor Ariza are in the lineup because Brooks has already insinuated that Dekker can only play the 4, especially given his so-so shooting from beyond the arc – he air-balled both of his three-point attempts on Sunday. If Porter and Ariza both start and play about 36 minutes each, then there are only 72 minutes left to spread across Thomas Bryant, Markieff Morris, Jeff Green, and Sam Dekker. Maybe you get Porter or Ariza some minutes at backup shooting guard. Regardless, Brooks is going to find the minutes for Dekker because he loves players that play hard and Dekker does just that. “We need more guys to play hard,” Brooks said in a subtle shot to others on the team. “We are trying to find that. I know that Tomas does play hard and Sam plays hard. And somebody else [Trevor Ariza] is going to come in here that is going to play hard. Let you guys know, I’m leaking it.”

“And Sam is a great cutter,” Brooks continued. “That is what I am finding out. I didn’t really know everything about his game, I still don’t. I’m assuming that he is going to be able to shoot threes better than he did. But he’s got the ball, he cuts to the basket, he moves the ball, he plays hard, he brings energy, he plays with the proper respect for the game. That is what I love about him, he always seems to be prepared. He doesn’t have to turn the switch on, it’s on.”

“Definitely college,” Dekker explained about when he developed the skill of cutting. “In high school I was a guy that had the ball in my hands all game. I get to Wisconsin, and it doesn’t matter who you are, you have to learn how to play within a system. So I learned how to cut, read defenses, find an open bubble somewhere. Came to the NBA and found that works, especially playing with a guy like James Harden in Houston – he’s going to find you. Him and John are very similar in that way. John likes guys that cut [and] Brad likes guys that cut because they get so much attention. When you do that, you get a lot of easy buckets. I didn’t do anything special tonight, those guys set me up and I was able to make it work.”

John Wall and Washington will look to continue this kind of improved play starting on Tuesday in Atlanta when they take on the Hawks. Can he and the team get up for a game against a lottery-bound team to take care of business? Hoop District will be there with live coverage to find out.

Health and Fitness 49m ago