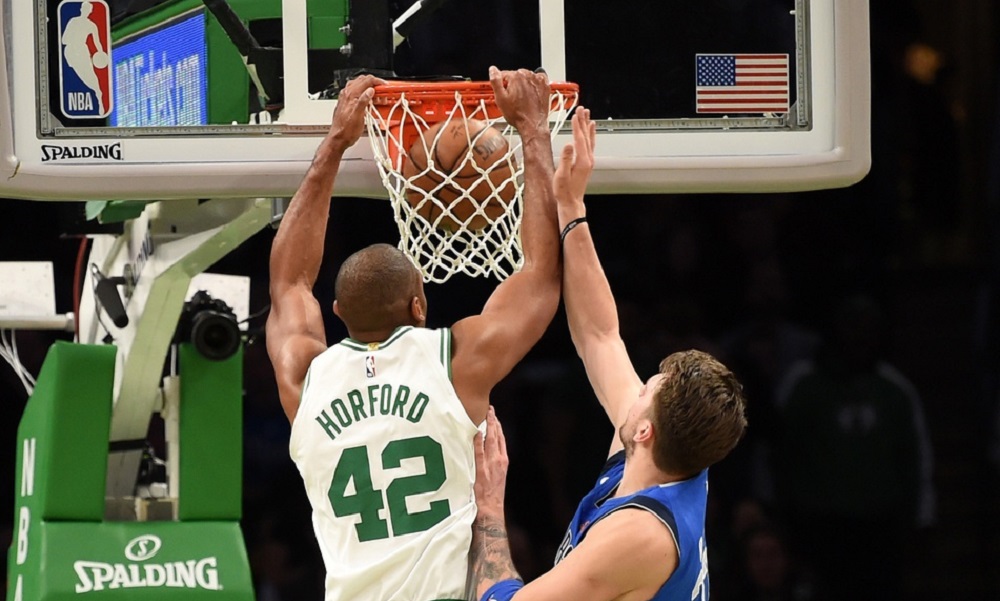 While going 14-6 over 20 games isn’t anything to write home about for a team that was expected to win over 55 games this year, the manner in which they are winning games is worth noting. The team that could barely score to start the season is long gone. Instead, the Celtics have transformed into the NBA’s best offense over the past 20 games.

The numbers don’t lie on this front. The Celtics have the No. 1 offense in the NBA since the halfway mark of their season, scoring 114.5 points per 100 possessions over the last 19 games. That’s a tremendous leap when you consider Al Horford, Kyrie Irving, Jaylen Brown and Gordon Hayward have all missed multiple games during that stretch. Irving and Morris were sidelined on Friday night, yet the Celtics’ offense showed no signs of slowing down thanks to more consistent contributions across the board.

Boston Sports Journal: How the Celtics have turned into an offensive juggernaut

There seemed to be a collective chill among the Celtics, despite the absence of Kyrie Irving (eye) and Marcus Morris (neck). The Celtics didn’t try to do too much. What’s more, they moved the ball as well as they have all season, collecting 35 assists on 42 made field goals, which is impressive.

What the Celtics lacked in shooting percentage (43.8), they compensated for in 3-point shooting (21 for 45, 46.7 percent) and teamwork. Tatum was left open for 3-pointers and so he took them, which is fine.

But nothing was forced. The Celtics were patient and unselfish. They took their turns gashing the Dallas defense and the absence of Irving and Morris, who average a combined 29 shots per game, allowed players such as Gordon Hayward and Jaylen Brown to take more shots (they combined for 30) and play extended minutes.

Eventually, the Celtics will need all of their contributing players to make a difference if they are to make a serious run in the Eastern Conference title. Brown is averaging 17 points in his past five games and shooting 63 percent from the field.

Globe: On balance, depth is the key to the Celtics

The Celtics assisted on 35 of their 42 made field goals against the Dallas Mavericks, which was their 13th 30-plus assist game this season. They are 9-4 in those games.

“We were moving the basketball,” Gordon Hayward, who had eight assists on the night, said after the game. “Guys were cutting. Spacing was good for the most part. It was fun.”

Fun is something the Celtics have not been for much of the season. Very often, the early-season Celtics devolved into extended bouts of isolation play, which is not enjoyable for fans, players, or the coaches.

“When we shoot those really tough ones that are un — not potentially assisted — you know, that’s when we get in trouble,” Brad Stevens said after the game. “We had a couple of those tonight but for the most part everybody was in a good rhythm and playing well together and seeking out the right shot, and we’ve just got to keep doing that as much as possible.”

MassLive: The Boston Celtics offense is finally starting to click

Everything was indeed clicking in last night’s mostly dominant 114-93 Celtics victory over Dallas. Everything. Consider, it’s not every night that Marcus Smart makes five triples. Or that you have a big and a wing (Horford and Hayward) post eight assists apiece. Or that the team drains 21 threes (only the eighth time in franchise history they’ve had 19 or more).

Hot-takers will ask if the Celtics are better without Kyrie running the offense (they’re not), but the truth is that everyone simply seems more comfortable playing together. They are stepping up to fill the voids when the team is shorthanded (which is always).

Entering the season, the team’s talent level and depth were expected to make the Celtics legitimate contenders. The evidence indicates that they’re getting there now.

Should we get excited? Not yet – the losses to the Rockets and Spurs were both within the past 10 days. But there is reason for optimism. In a nutshell, from the Boston Sports Journal piece:

With nine of their next 13 games coming at the TD Garden, the opportunity is there for this group to really put together an elite stretch of basketball and climb back towards the top of the East (4.5 games back of No. 1 spot). It’s not going to be easy with the Bucks and Raptors playing at a high level but the ingredients are starting to come together for this group. They are a top-10 team in defensive and offensive efficiency for the first time all year and that’s usually a prerequisite of a title contender. Now, it comes down to whether this group can start stringing some consistent efforts together on both ends.

On Page 2: A visit with Tommy

Tommy Heinsohn has been absent from Celtics telecasts for an extended period, missing from courtside spot for home games as well as the studio show during road trips. Fans have been concerned, so it was good news to hear from Tommy himself during last night’s game.

Watch the @NBCSBoston broadcast on @NBCSBoston or stream: https://t.co/EyDpFpzgf0 pic.twitter.com/XfKvwGPyJV

Clearly Tommy Heinsohn hasn’t lost his edge. Just said he wants to punch anybody who tells Kyrie Irving to take fewer shots. Not advocating any violence. Just love to hear the passion!

And here’s a more in-depth visit with Tommy:

After a monthlong absence, 84-year-old Tommy Heinsohn returns to @NBCSBoston’s Celtics broadcast tonight when he phones in for 2nd quarter. And he’s got plenty of thoughts on this team.

“It’s not that I’ve been hiding. I’ve been watching all the games.”

In what might be his final game in Boston…

Despite everybody cheering wildly for Dirk to hit one last shot in the final minute at the Garden, he finished the night scoreless.

“I’ve rooted for two opponents to score in my life and that was Paul Pierce and Dirk Nowitzki.” – Brad Stevens

The crowd is booing non-Dirk Mavericks who have the audacity to shoot. This is glorious. Now a "Dirk" chant from the fans.

Everyone at TD Garden wanted Dirk to hit a 3, but he fell just short 😂 pic.twitter.com/JmwnXouog2

NBC Sports Boston: Celtics have no problem corralling the Mavericks

Globe: Celtics caught a glimpse of Mavericks rookie Luka Doncic when he was 16  |  Shorthanded Celtics band together to defeat Dallas