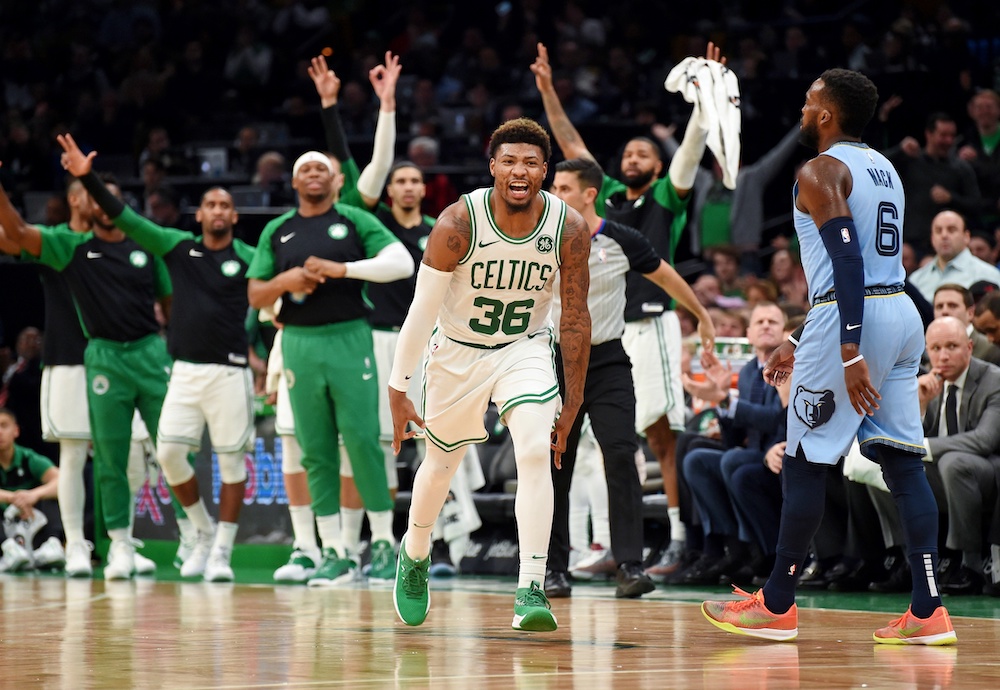 Marcus Smart continued his hot streak from 3-point range Friday night, going 4-for-4 from downtown in the first quarter and finishing 6-for-8  by the end of the Celtics’ 122-116 win over Memphis.

He has shot .485 (16-for-33) over seven games in January. Maybe it’s time not to consider the guard’s progress a surprise.

I thought he was going to have a really good shooting year last year,” coach Brad Stevens said. “He put in a lot of time and work over the summer, and then he had a couple of hand injuries that set him back for that season. But you could see that there was a foundation there that was really going to pay off. He’s always made big shots but you could see that his shot had really improved, so it’s unfortunate about the injuries. And then this year, it’s looked good all year.”

Smart, before lacerating his hand after punching a picture frame and later needing hand surgery last season, had the same feeling.

“I definitely felt the same way,” he said. “I took an injury with my hand a few times, and it kind of delayed the process. I thank God that everything has been on track for me.”

He can now take some satisfaction in proving virtually everyone wrong.

“My whole life I’ve been criticized for all kinds of things. I’ve always been the underdog and I’ve always bet on myself,” he said. “This isn’t new to me and to be honest it’s not even a surprise. I’ve been putting in the work and it’s starting to pay off. They keep giving me confidence and the confidence is going to stay up. Hopefully the shots keep falling.”

I keep re-reading Smart’s words in the last paragraph of this portion of Mark Murphy’s story in today’s Herald, …“They keep giving me confidence and the confidence is going to to stay up.”

What does confidence look like? Well, for one, it looks like 4 years and $52 million dollars. Our friends at CelticsBlog summed it up for us last night:

Smart has his after he gets paid

And that’s a big part of where Smart’s confidence comes from. A team, no the team, that first put its trust in Smart in the summer of 2014 continued to show belief in him by paying him what he and his agent thought was his true value. And the Celtics had to know that paying a guy like Smart would do the opposite of make him fat and happy (his agent would still be Happy… I’ll see myself out), but instead would make him play free.

Speaking of playing free, that’s something the only coach he’s ever had in the NBA has allowed him to do from day one. Brad Stevens has never tried to rein Marcus Smart in. He’s been allowed to shoot 3s when he’s open, and heck, as long as it isn’t with 20 seconds left on the shot clock, he’s allowed to take a contested 3, too, as long as it’s the best shot available. They keep giving me the confidence… that’s an investment that Stevens put into Smart starting five years ago with the thought that a guy like Marcus Smart would do the work to get better.

Five years later, and we’re see it all come to fruition on the offensive end. Combine that with The Cobra’s ever impressive on-ball defense, his ability to get a paw on every defensive rebound in his orbit and his natural fit next to Kyrie Irving in the starting backcourt, and it’s clear to see that the investment in Marcus Smart has paid off.

Now let’s get him in the 3-point contest in Charlotte because seeing him next to the Stephs, JJs and Klays of the world would be so funny. He’d either put up a 4 point first-round performance or he’d win the damn thing.

Mass Live — Boston Celtics’ Marcus Smart drops six 3-pointers vs. Memphis Grizzlies: ‘I feel like my work is paying off’

On page 2, where Shelvin Mack lit a flame

Irving and Mack were hit with double technicals for the flareup and the usually composed Irving was clearly heated about what Mack said to him as teammates stepped between the two to prevent further escalation.

“I mean, [Mack] said something pretty disrespectful. So I told him to do something about it,” said Irving. “He didn’t. Obviously, we’re in an NBA basketball game. If it gets to that point, I mean, I don’t usually get techs like that. But if someone questions your manhood, at that point, you got no choice.

Kyrie Irving usually keeps a pretty calm demeanor on the basketball court, so whatever Shelvin Mack said to him must have been quite incendiary. Here are some thoughts:

“I bet you called Lebron collect, you cheap bastard.”

“I fell asleep 25 minutes into the Uncle Drew movie.”

“I agree with everything Bill Simmons has said about you lately.”

“You ever read that book on leadership, ‘The Seven Habits of Highly Effective People?’ I read it last week. You only exhibit two of those seven habits, you shitty leader, you.”

“I’m pretty close with Brad from my Butler days. You’re his third favorite point guard he’s ever coached behind me and Phil Pressey.”

Any other ideas? Leave ’em in the comments.

And finally, promising news on IT

There is optimism that former All-Star guard Isaiah Thomas will make his debut with the Denver Nuggets prior to the mid-February All-Star break, league sources told ESPN on Friday.

Thomas has been gathering momentum in his rehabilitation process from hip surgery in March, and there’s hope among Thomas and the Nuggets organization he could return as soon as a Feb. 11-13 homestand against Miami and Sacramento, sources said.

There’s strong confidence that he will return no later than the first game after the All Star break on Feb. 22 in Dallas, league sources said.

I want only good things to happen to Isaiah Thomas, and so I really hope that not only is this timeline accurate, but that he kicks ass and gets himself that one fat contract of his career this off-season. The Nuggets come to town on March 18th. We can finally get him that tribute video he deserves.

The Athletic — Kyrie Irving stays hot, reaching another level as he sets the tone for Celtics