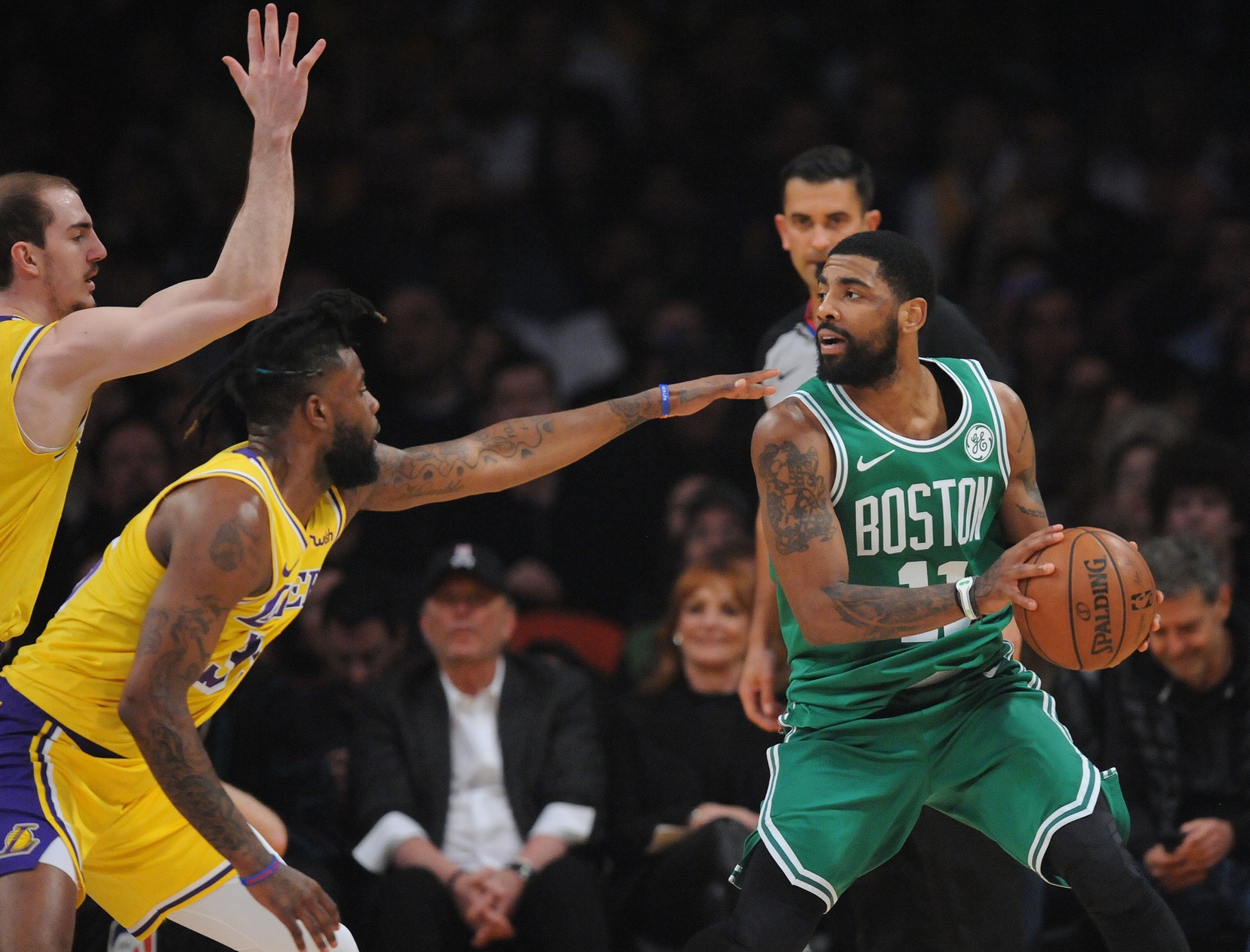 The Celtics improved to 3-0 on their California gauntlet with another steady game. Kyrie was in his bag, Gordon Hayward looked more like his old self, and Marcus Smart got hot from three. LeBron James kept it competitive, but the Celtics were too much. Final score: 120-107. Kyrie finishes with 30 points, seven rebounds, five assists, two steals, and two blocks on 12-18 shooting.

Al Horford has entered what I’ve been calling his second prime. His midrange shot looks fantastic and he looks as comfortable as ever orchestrating the offense. Horford started the game hitting his first four shots before missing a straightaway three.

The Kyrie Irving/Marcus Smart backcourt has really turned into an interesting duo. They were always a good combination on talent alone but the way they’ve been splitting playmaking duty has created a nice balance in keeping the offense less predictable. As the Celtics closed out the second quarter with some authority, Smart and Irving had a nice stretch to extend the lead to 10. A Smart three led to a Morris bucket that was assisted by Irving. Then, a Smart-forced turnover led to another Morris basket in transition, assisted once again by Kyrie. It was 57-47 at the half.

I blinked and Marcus Smart is up to four of six from three early in the third quarter. One was shot over LeBron, one came off the Lakers’ double-teaming Al Horford (always a mistake), and another was just on a simple pass to him waiting in the corner. The Celtics were shooting 26% from deep at the half, and Smart’s little run brought them to 33%. They finished 14-38 (36.8%) overall.

Boston only hit three of their first 15 three-point attempts, which is more indicative of their shot selection than anything. Several of those shots came early in the shot clock and after very little ball movement.

A third-quarter Lakers run came when the Celtics offense got a little stagnant and a 17 point lead was quickly cut to five. The Lakers deserve some credit for playing that stretch with added intensity (Moe freaking Wagner outran the Celtics on a fastbreak), but it still felt like the Celtics were suffocating themselves with indecisiveness on offense. At any rate, the end result of the third quarter was still a 17 point lead for Boston.

Rondo holds some sort of vendetta against the Celtics. Whenever I watch the Lakers’ nationally televised games he absolutely stinks, and yet he plays the Celtics with a chip on his shoulder even though he was traded as a result of his garbage attitude towards rebuilding.

Kyrie keeps the ball under control & gets it to Morris Sr. for ✌️(@AAANe_MAnews) #AAANortheast pic.twitter.com/Klu3qoi83U

The catch.
The avoid.
The finish.