Wizards evaluating for next season with new starting lineup 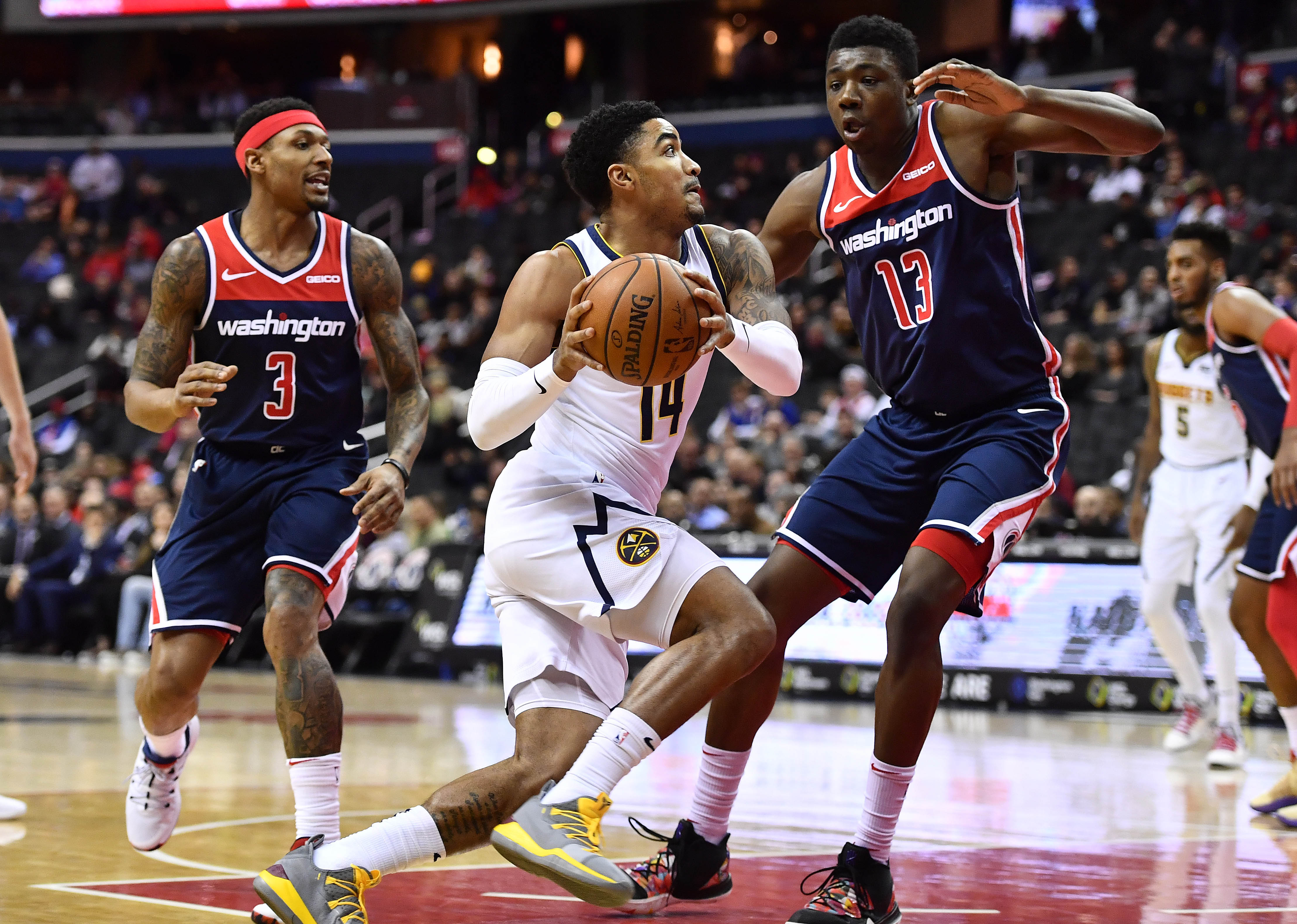 Wizards evaluating for next season with new starting lineup

After 72 games of regular season basketball, the Washington Wizards have finally started to think about the future instead of just the present. As they have done for years, the organization has made multiple win now moves this season in an effort to limp into the playoffs just to say they made the post-season. On Thursday night, they lost to the Denver Nuggets, 113-108, but started to give themselves information to make better decisions, theoretically, in the future.

With Trevor Ariza exiting Wednesday’s game in Chicago with a strained left groin, Troy Brown Jr. was given the opportunity to start. The rookie suspected it might be the case with the short turnaround and his hunch was confirmed when he saw on Twitter that Scott Brooks told the media that the 19-year old would start the game. Brooks had not sat down with Brown to convey the news formally to him yet so the coach knew his rookie would find out via Twitter.

In 33 minutes of play, a career-high, Brown scored 13 points on 6-of-10 shooting, grabbed five rebounds, and passed out three assists. In the third quarter alone, Brown was a perfect 4-of-4 from the field for nine points, his previous career-high. Because he did not like the way he finished the first half, he wanted to come out aggressive after halftime and it worked well. Ever since draining a game-winning and buzzer-beating three-pointer for the Capital City Go-Go, Brown has been a staple in the rotation.

Troy Brown Jr. on his 9 points on 4-4 shooting in the third quarter: "Just doing what was given to me. … I just tried to come out and be aggressive and make plays." pic.twitter.com/dgknZ2Baft

Even though it should have been well before that, the Wizards are finally starting to expedite the 15th overall pick’s development but letting him gain experience and play through mistakes. His teammates were happy that Brown got the opportunity and were pleased with his performance.

Bradley Beal on @Troy_Brown33: "He's a terrific kid, he wants to learn, he wants to get better, he wants to win. He's all about the right things on and off the floor. It's just great to be able to see him get that opportunity. He deserves it. He's a guy that doesn't complain." pic.twitter.com/qy06AotXkl

Tomas Satoransky on Troy Brown Jr.'s starting: "He played with great effort. I think it's a great experience for him. He wasn't afraid to attack the basket." pic.twitter.com/30VqjCNqWS

Besides Brown entering the starting lineup, the Wizards further tweaked their first unit by re-inserting Thomas Bryant at the expense of Jeff Green. The energetic big who was picked up off waivers from the Lakers before free agency last summer was benched when the team opted to give Bobby Portis a closer look. Bryant had a solid game with 22 points on 9-of-11 shooting to go along with eight rebounds and two blocks in 35 minutes of play.

Portis was able to return to his more favored position of power forward with Bryant playing with him and recorded 18 points on 6-of-11 shooting and eight rebounds in 36 minutes. The Arkansas product that the Wizards passed over for Kelly Oubre Jr. in 2015 enjoys the ability to post-up smaller players when he is not playing center, but understands he has to do whatever the team needs him to. Scott Brooks admits playing Bryant and Portis together was “experimenting” because they have “some decisions to make” this offseason so even though he will not flat out say the team is done with this season, you can read between the lines.

Bobby Portis enjoys playing power forward over center because it allows him to post-up smaller players: "At the 5, I'm not going to post up a 7-2, 260 guy." pic.twitter.com/4i1M5Fon3Y

Both Bryant and Portis are restricted free agents this summer and Washington will have to see if they can re-sign one, both, or neither. The Wizards will have the right to match any offer sheet that the two big men receive, which is also the case for Tomas Satoransky, but with only $20+ million in cap space available, they could be priced out. Before Thursday’s game, Bryant and Portis had only played five minutes together so it was essential that Washington get a peak if the two bigs can play together or if it will strictly be one or the other this summer. Bryant will likely be cheaper and probably has more potential from an age perspective, but both have their downsides, especially on the defensive end.

The team is not going to pick up Jabari Parker’s $20 million option next season, but they are also introduced in re-signing him at a cheaper rate because of the athleticism the former No. 2 overall pick has displayed over the past few weeks. How the team prioritizes Bryant and/or Portis also impacts how aggressive they can look to retain Parker, too. At six games back of the playoffs with nine games to play, it is a good thing that the Wizards are finally using their remaining time in the 2018-19 season to make more informed decisions in the summer.