Your Morning Dump... Where these teams really don't like each other (and I love it!) 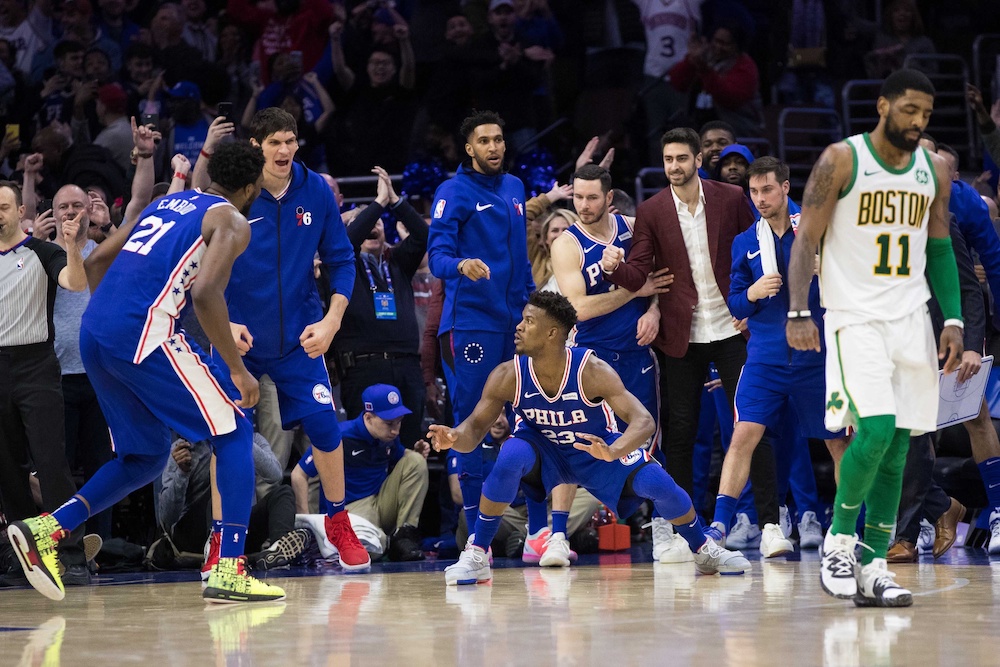 Your Morning Dump... Where these teams really don't like each other (and I love it!)

"It's about time. It's about time they got a win. I'm happy they can get a win and be as happy as possible. It's one game and we still won the season series." #76ers

7 games of this please! (Ok, it’ll probably be 5 games… we’ll give the Sixers game 4 in Boston, maybe even drop some red, white and blue confetti from the Garden rafters just to make them feel like they’re back at home in Lametown, Pennsylvania)

As the post-season wrapped up last summer and Lebron headed west, this is what we were all settling in for; years and years of Boston and Philadelphia at the top of the conference again with all other teams settling into their seats in the front row with their popcorn in hand.

It hasn’t exactly worked out that way. For as hot as Philly has been lately, their season has been mildly disappointing and aesthetically looks way different than we all thought it would (hello Jimmy, Tobi and Bobi, goodbye RoCo, Dario and Markelle). The Celtics? Well, we don’t have to rehash for the 500th time how disappointing the regular season has been to date.

But the good news is, both of these teams should be pretty well set up for numerous meaningful battles going into the future, and us Bostonians, those Philadelphians, and NBA fans across the country are better off for it. These teams hate each other, and it’s fantastic.

Marcus Smart may have lost us the battle yesterday, but he’s greatly contributed to the war that should rage on with ferocity for seasons to come. Terry Rozier may not be a part of this duel for much longer, but he’s doing everything to stoke its intensity, and is backing up his words with great play. Joel Embiid brought his best to the floor last night, and while much of it was spent at the line, he made huge plays to win the game for Philly.

There’s a world in which Boston, with a favorable draw in the four slot, beats Indiana, takes down depleted Milwaukee and sits waiting in the conference finals. Then Philly dispatches of Brooklyn/Detroit, wins a slugfest with Toronto and sets the stage for up to seven games of phenomenal theater. That’s the only way we see this again this season, and I am openly rooting for it. No other Eastern Conference match-up elicits this much disgust between teams and fan bases. We need more of it!

Mass Live — Boston Celtics vs. Philadelphia 76ers probably won’t happen in the post-season, which is a shame

On page 2, the Celtics will yet again feel the absence of Aron Baynes

The Celtics center sprained his left ankle Wednesday night in the third quarter of the Celtics’ 118-115 loss to Philadelphia, and didn’t return.

The team later termed the injury a Grade 2 sprain, with no timeline for a return. With only 10 games left in the regular season, Baynes’ return before the playoffs very much is up in the air.

“A Grade 2 ankle sprain is what I was told. What that means, medically, I have no idea,” coach Brad Stevens said.

Ugh. We’ve all seen the numbers… the Celtics play suffers overall when Aron Baynes isn’t in the lineup. At this point, the hope is that he can rehab well enough to be ready for Pacers a little under a month from now. More realistically, the Celtics are going to have to gut out the first round without him and hope he’s ready for a likely Milwaukee match-up in round two. Every time Baynes comes back from an injury to an extremity, he injures another. Tough luck for the big guy and for the Celtics.

As for what it means for the 11 remaining games on the schedule — the Celtics have to play for the four seed now. The two games left against Indiana are must-win games, and games they’ll have to win without the big guy.