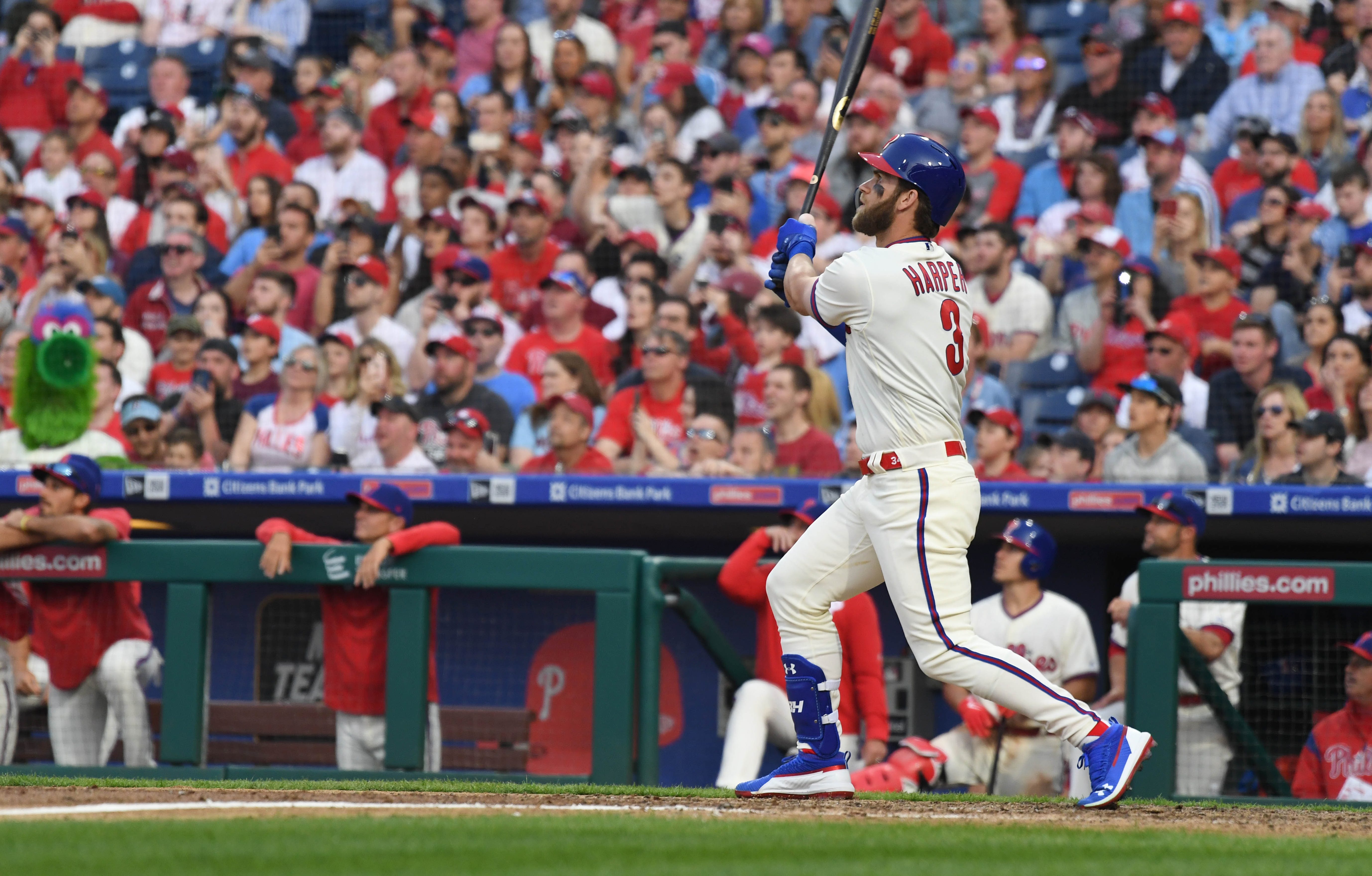 With one mighty swing of the bat that belongs to Nick Williams, you could feel the weight being lifted off the shoulders of Bryce Harper as it was channeled through his arms, down to his wrists and transferring to the barrel of the bat as it sent a pitch from Atlanta Braves reliever Jesse Biddle all the way to the second deck of the right-field stands in Citizens Bank Park.

After going 0-for-3 in his Phillies debut on Opening Day and as he watched two of his teammates, J.T. Realmuto and Maikel Franco, deliver home runs earlier in the game to give the Phillies a lead on two separate occasions, Harper finally got in on the fun with his first hit in a Phillies uniform. And it could not have been scripted any better as the $330 million man delivered the mighty blast the packed house at Citizens Bank Park hopes to see plenty of over the next 13 years.

That was what Phillies fans had been waiting to see the first couple of games, and it was worth the mild wait. Naturally, such a moment from the new franchise player deserved a curtain call. Harper delivered on that with enthusiastic flair as well.

ARE YOU KIDDING ME WITH THAT TODAY?!?! #Barreldelphia

It was quite a moment for the Phillies, and it also proved to be winning run in the game. The Braves put six runs on the scoreboard before the end of the game as they chipped away quickly off reliever David Robertson in the ninth inning before the Phillies closed it out for an 8-6 victory. The win against the Braves gave the Phillies their first series win to open a season since 2011. Being able to pick that up right out of the gates of the new season against the defending NL East Division champions after struggling so much in division play last season is not to be overlooked. This was a big start to the season for the Phillies, and there is still one more Sunday night game to play to close out the series. A sweep would be fantastic, although simply getting a series win is already satisfying.

Rhys Hoskins said the ballpark was the loudest he had ever heard it after Bryce Harper homered. "I think there's more in there," he said. "We're in March. What happens when we're in September and October?"

It has been just two games but it is refreshing to see the energy back at the ballpark. The Phillies have now hit six home runs in the first two games, with five different players providing the power (Franco has hit two) throughout the lineup. This being baseball, we know that not every game is going to be quite like this, and there will be days when the bats just don’t have it in them for whatever reason. But if the Phillies were looking to make a statement early in the year, they are off to a good start and everyone is contributing in some way.

Andrew McCutchen started the year with a mega shot for a solo home run on Opening Day, and Harper and Realmuto just hit their first home runs with the Phillies. Rhys Hoskins had the grand slam on Opening Day and Maikel Franco has now hit two crucial home runs in the first two games of the year in the eighth spot.

The offense has certainly led the way, and they needed it to on Saturday. Nick Pivetta made his season debut and he labored against the Braves, who came out swinging early to take a 3-0 lead in the first two innings. Manager Gabe Kapler was direct and honest in saying it wasn’t Pivetta’s finest outing by any stretch of the imagination. Some of that may have been on Pivetta, but it is also fair to tip the cap to the Braves, who wanted to come out and set a tone after getting clobbered on Opening Day. They did just that, but the bullpen woes in Atlanta played to the advantage of the Phillies for the second game in a row. The Phillies also have some room for improvement in the bullpen too. If these first two games were any indication, we could be getting some slugfests between these two teams this season.

Now it’s on to Game 3 of 162. Pace yourselves, Phillies fans. We could be in for a long drive.