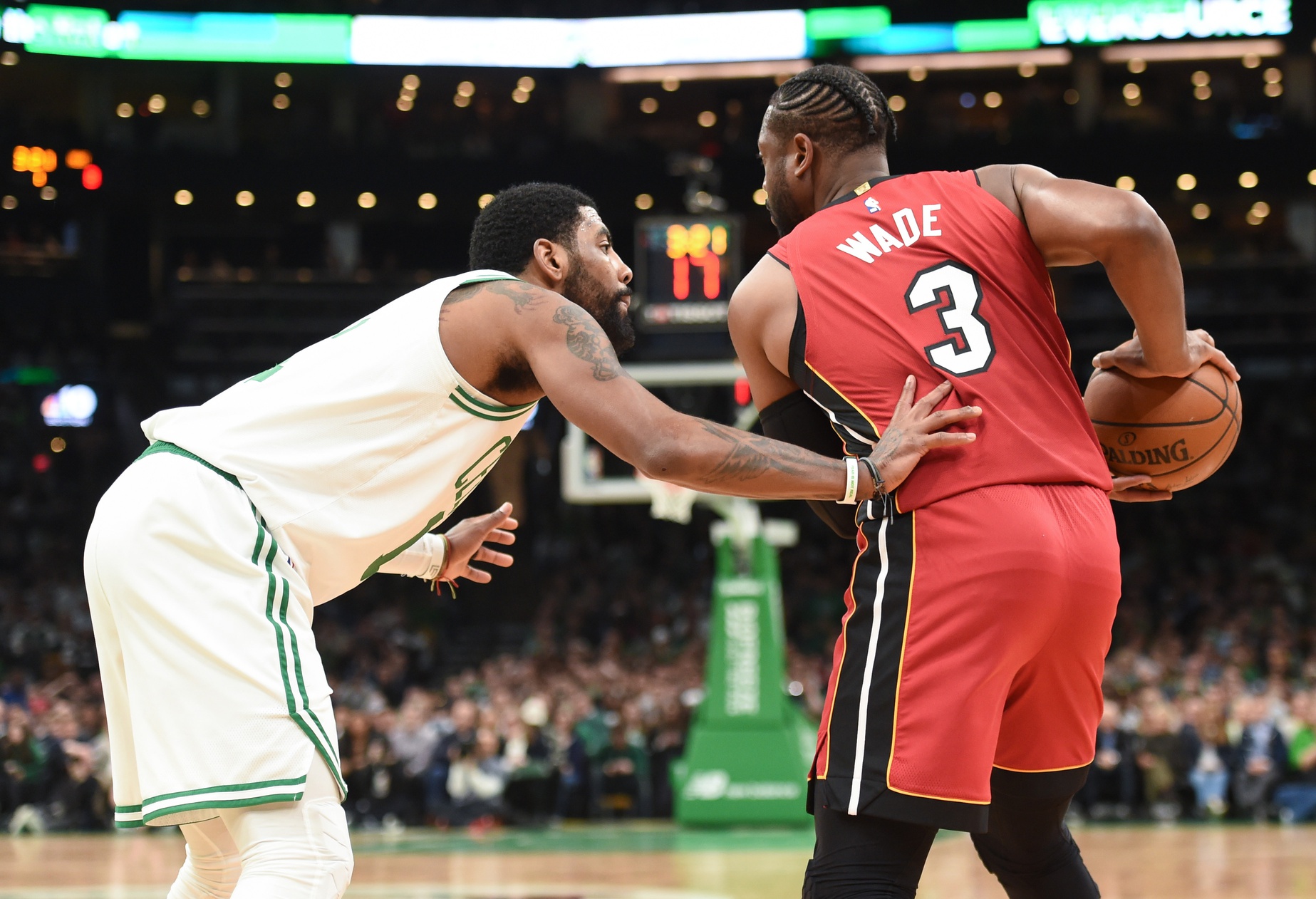 IN A NUTSHELL
Tonight’s Boston Celtics matchup against the Miami Heat was the last time HAZMAT-level-4 contaminant and noted player-injurer Dwyane Wade set foot in the Garden as a player. Every time I heard someone in the arena cheering when Wade made a shot in this game, I wanted to shake them like recalcitrant raccoons and scream “Y’ALL FORGET WHAT HE DID? Y’ALL FORGET HIM TRYING TO LITERALLY MURDER RONDO?”* But, like, legacy and stuff, I guess. Shrug.

This was one hell of a good game. Boston smacked them silly in the first quarter behind strong performances across the roster, then let surges by Kyrie Irving, Marcus Smart, Jayson Tatum and Al Horford carry them in the second. Stuff got hairy in the second half: Miami whittled a lead that’d previously been 20 or more down to single digits on the strength of a resurgent Goran Dragic, the promising big-man muscle of Bam Adebayo and…..ok fine grumble grumble DWYANE WADE DID SOME STUFF THAT WAS GOOD. Fortunately, clutchness from Kyrie, Uncle Al and Taco Jay overcame the Heat’s rally and brought home the 110-105 win.

WHAT WENT RIGHT
The squad’s collective mouth still held the brackish taste of their humiliating weekend defeat by the Brooklyn Nets, and they played with considerable vigor as a result. If they were to lose, it wouldn’t be through lack of trying.

Across the roster, Boston decided to beat Miami at its own game by hoisting and sinking long-range shots. (That might seem surprising, considering it’s never been the Heat’s M.O. and is often the Celtics’, but the former has taken more threes in 2018-19 than any other season in their history.) Those shots were ultimately the difference in the game, and brought the team to beat the existing Celtics franchise record for made threes.

WHAT WENT WRONG
Boston had a hard time providing meaningful defense in the paint, especially with Aron Baynes earning four fouls before the first half ended. Miami used its size advantage—dudes like James Johnson, Bam Adebayo and Hassan Whiteside—to do as much damage there as they could. The Cs also seemed to avoid offensive rebounding opportunities that looked like they’d be easy to exploit. (Then again, in this NBA the line between an offensive rebound and a goaltend is sometimes veeeeeeery thin.)

More specifically, the runs Miami went on at various points throughout the third and fourth quarters weren’t exactly heartening—they involved the same brain farts that were legion during the Brooklyn game. Like, it’s a bit frustrating to see the Celtics fall for fairly basic-ass college zone defense, again, but shit, I guess it is March Madness after all.

Can you really hate superstar calls when they earn this result?

Kyrie Irving gets the crunch-time, and-one bucket to fall and earns tonight's @JetBlue Play of the Game! pic.twitter.com/hRYg79WKG9

Tatum’s clutch trey down the stretch:

I’ve shit all over Hayward, sometimes unfairly, this whole season, so let me say that this was real nice to see:

ICYMI: This crazy play was worth the Hayward dunk at the end (@AAANe_MAnews) #AAANortheast pic.twitter.com/w7zwZR6iEw

UNCLE AL, ALONE IS A GOD:

This is what happens when you leave Al open at the rim 🤷‍♂️ (@AAANe_MAnews) #AAANortheast pic.twitter.com/44MAjAD7WE