Your Morning Dump... Where that's what it's supposed to look and feel like 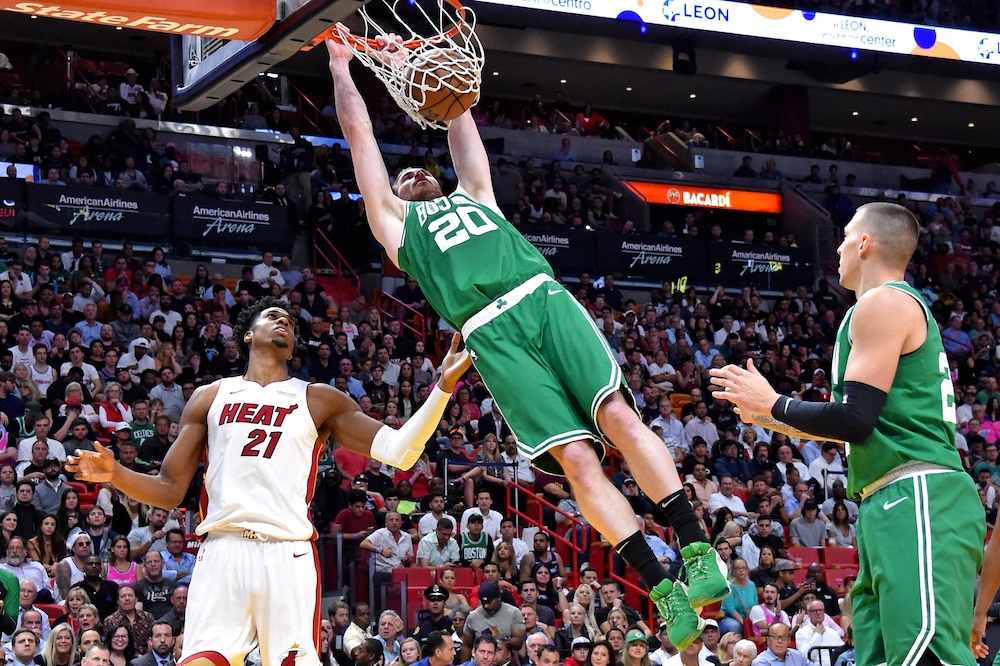 Your Morning Dump... Where that's what it's supposed to look and feel like

Of course, an early-April matchup with the Heat wasn’t supposed to be the first time that trio topped 20 apiece, and nobody who watches the NBA watched the Celtics for the first time on Wednesday, which is what made the otherwise unremarkable win over the Heat seem at least a little bit noteworthy.

“It does feel different,” Horford said, when asked if the team’s recent success is sustainable. “I just think that this time of the year and everything that’s at stake, and the playoffs nearing, I think our group is playing much better focus. That’s encouraging.”

I feel like I have very little to add because Tom Westerholm put it all so perfectly in the opening few paragraphs of this morning’s piece.

The Celtics won a game in unremarkable fashion, against a team they should beat most of the time and let them hang around a little bit until they put them away in the fourth quarter.

But if the Celtics played more games likes that — where multiple guys carried the offense and the team’s defensive stalwarts brought their hardhats, it probably would have been victory number 57 instead of victory number 47.

You just expected to see the green do this more often this season, right? On nights where other teams got up to play them (Miami was fighting for everything last night after losing to nights ago at the Garden), you expected the Celtics depth and talent to slowly wear teams down. In Charlotte two weeks ago, against the Clippers and Lakers in February… even on the nights the Celtics played down to their opponents, you assumed that depth and talent would be enough to accumulate lots of wins.

Tom is exactly right — last night’s game was not remarkable, but it was refreshing. Yet in some ways, it also had me wishing we could play out some of the regular season again. I wish we saw more of that this season. Let’s hope we see more of it on Friday and into the playoffs.

On page 2, will we see this Gordon in the playoffs?

This isn’t just one solid performance for Hayward, this has been an encouraging recent stretch. In the past six games, Hayward is averaging 15.7 points on 52.2% shooting to go along with 6.5 rebounds and 3 assists over 29.3 minutes per game. Hayward is giving the Celtics a much-needed scoring jolt off the bench, particularly on Wednesday when the team was playing without Marcus Morris and Jaylen Brown.

Hayward’s progress clearly isn’t lost on his teammates, maybe because they understand how important he is to the team’s postseason success. Boston’s best basketball, especially against top competition, has come when Hayward has played his best ball. It’s not unfair to suggest that much of what the Celtics will accomplish could hinge on Hayward’s ability to produce impactful nights as we saw on Wednesday.

More than anything, his teammates appreciate the strides he’s made to this point.

“It’s been a trying season for all of us but him, individually, coming back from an injury like he did, it’s well-documented. I think he’s just trying things now, and with more confidence,” said Irving. “Getting into the lane, getting fouled…

NBCSports Boston — Celtics a different team with an aggressive Hayward

I’m too lazy to look back and check but in addition to most of Gordon Hayward’s best games coming away from the Garden (at Minnesota, at Golden State, at Philly and now at Miami) Hayward seems to be at his best when there are fewer rotation guys available.

While Hayward isn’t completely back to the player he once was, he still isn’t best as a third or fourth option. Earlier in the season we’d see entire stretches with Hayward in the corner offensively and the Celtics seemingly playing 4 on 5. When the Cs did run the offense through Hayward, he wasn’t getting to the basket, creating separation or playing with confidence. But on the nights he did get hot, it was because one or two other guys were sitting and the Celtics really needed Hayward to dig deep.

It’ll be interesting to see what minutes look like in the post-season, and if everyone’s healthy again tomorrow night in Indiana, we’ll get another preview.

If Marcus Morris plays sparingly and his court time is doled out to Hayward and Jaylen Brown, it should lead to more nights like last night for Hayward. As much as we all love Mook’s heart and soul, we probably all think he should be providing it from the bench.