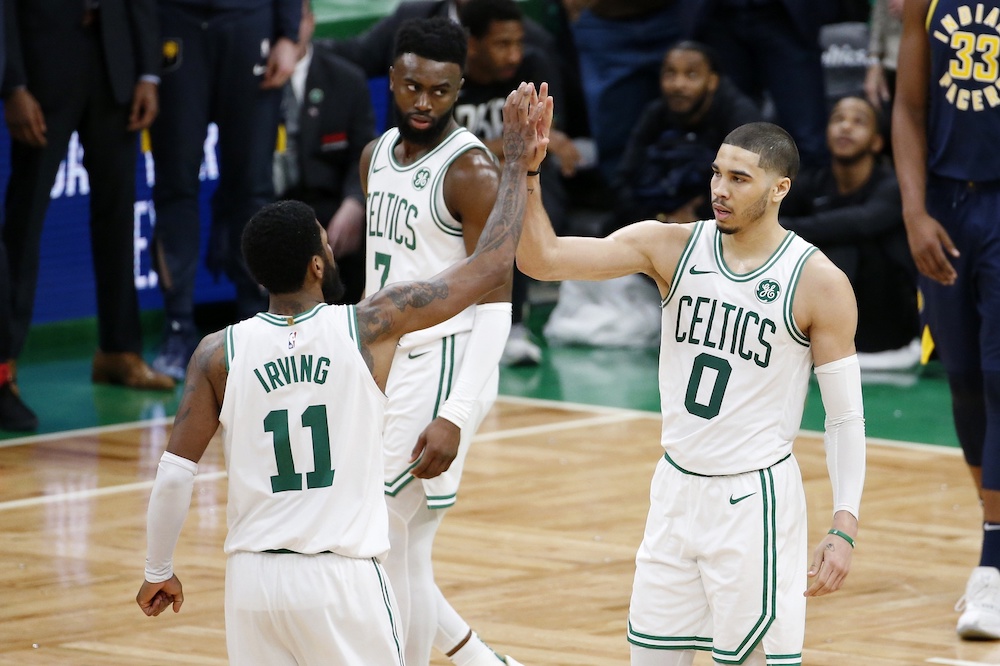 If the Celtics ever do maximize their potential, Wednesday’s fourth quarter will serve as a guide. Almost as if to prove how far they have come since the beginning of the season, they even dusted off the opening night starting lineup – Irving, Brown, Hayward, Tatum and Horford – to close out the final 3:53. Over the first quarter of the season, that group symbolized everything wrong with the Celtics. When sharing the court, those five players couldn’t score, couldn’t develop cohesion and couldn’t seem to get out of each other’s way. They were a mess, prompting Stevens to change the first unit and setting the stage for a confounding season.

Still, like the Celtics as a whole, that lineup always held tantalizing promise. Throughout the final minutes Wednesday, the potential sizzled not because Boston tried to do anything particularly special, but because they kept it simple.

“In the fourth, we really, really locked in and held them to one shot, really made them earn everything they got, and I thought that was the difference,” Horford said. “And then on offense, I felt like we just kept on making the right play. Guys trying to play the right way. That drive that Jaylen had there at the end and kicked it out to Tatum, that was huge. Coach has been harping on that, and he did it in that moment.”

Also cool to see Boston closing with the lineup that started their season before things got wacky — Kyrie/Brown/Tatum/Hayward/Al. Will be interesting to see if that group turns into what everyone thought it could be.

I was lucky enough to be in attendance last night and in the middle of those taut final four minutes turned to my buddy and said, “wait a minute, the starters are out there.”

The group that had us all thinking “title contender” back in October closed out last night’s game. We can talk all about Kyrie Irving’s superstar performance, the return of Playoff Jay, the gutsiness of Al Horford playing the final 14 minutes with a fever, Jaylen Brown making the right play on the go ahead shot late and Gordon Hayward’s right cut at the right time to essentially ice game two, but let’s instead talk about them as a unit and what it could mean.

Brad Stevens likely won’t start this group going forward, and he may not close with them every playoff night to come, but there’s a symbolic meaning in that five sharing the court and having a positive impact. That group elicited so much promise and hype, so much frustration and disbelief after that, and so it’s exciting to see them gel together, make stops, distribute the ball and carry the Celtics to a huge win.

Kyrie Irving carried the Celtics for much of last night, but it was The Five we’d all been waiting over a year to see excel on the court together that pushed them across the finish line.

On page 2, Kyrie opened things up for others

Indiana was well aware of that, too. And after watching him take over the game, the Pacers were determined to make sure he didn’t beat them down the stretch.

And, in a sense, they accomplished their goal. After Irving hit a free throw with 3 minutes, 12 seconds remaining, he didn’t take a single shot the rest of the game. But it was no coincidence that, as the game wound down, the rest of the Celtics found themselves with acres of space within which to operate.

Irving’s mere presence on the court, and the threat of him taking over as he has so many times before in his career in precisely those types of moments — including a game-winning layup against these very same Pacers here late in the regular season — was enough to send Indiana’s defense scrambling, and his teammates were happy to take advantage of it.

Suddenly, a team that’s built to get the ball to Irving in late-and-close situations instead had Jayson Tatum and Hayward shaking free for buckets inside the final minute to seal the win for the Celtics.

“Kyrie was incredible in coming back, and when he gets on a run like that, he’s going to draw even more attention than he already draws, which is as much as anybody draws in the league,” Celtics coach Brad Stevens said. “And so, in the last couple minutes of the game, he just made the right play.

ESPN — Kyrie Irving finally has his playoff moment for the Celtics

It felt like the Celtics were going to win or lose with Kyrie Irving last night. They did… but just not the way most of us imagined they would. Midway through the fourth quarter you figured it would be with Irving taking all the big shots in the final few minutes, which seemed like not only a safe bet but a safe strategy the way he was going. Instead, Irving deferred, and it worked. I’m not sure if they showed Kyrie on TV after the Hayward bucket put the Celtics up by 3, but as both teams headed towards their benches after a Nate McMillan timeout, Irving stood at half-court screaming encouragement and pumping his fists. He reveled in the big moments from Jaylen Brown, Hayward and Jayson Tatum late.

Mass Live — Kyrie Irving on huge playoff performance as a Boston Celtic: ‘There’s nothing like it’

And finally, the Celtics hit the road for the weekend

Boston takes a 2-0 series lead into Indiana thanks largely to Irving’s 37-point performance on Wednesday night. While Irving is pleased with the way the first two games have gone, he isn’t getting complacent.

“Now, it’s about going on the road and doing the same thing,” Irving told reporters after the victory. “And playing with an intensity that’s needed to get a big-time win on the road. That’s where the big test comes.”

The Pacers went 29-12 at Bankers Life Fieldhouse this season, so Irving is correct in pointing out the Celtics have a sizable challenge coming their way.

The Celtics were not a great road team this year. The Pacers played really well at home. If the Celtics play like they did in the first two games of the series, they’re probably coming back 2-2.

I’m hoping for a split and then getting this thing wrapped up in a game 5 at home early next week.