Your Morning Dump… Where the Celtics just aren’t good enough 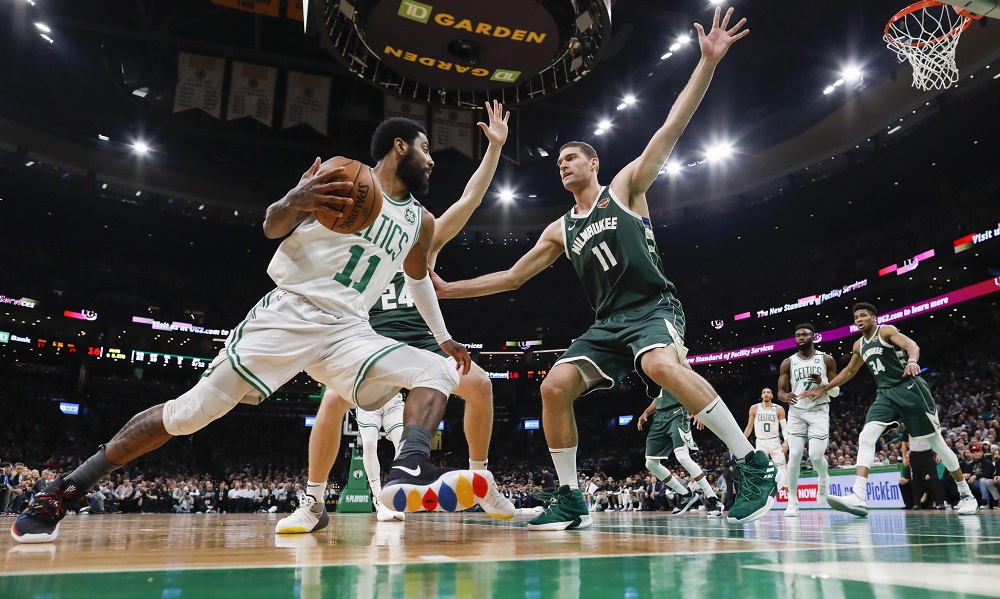 Your Morning Dump… Where the Celtics just aren’t good enough

It was a collective meltdown by Boston to the top-seeded Bucks who simply played harder and smarter while showing a level of depth that proved to be too much for the Celtics – even against the Celtics go-to guys like Kyrie Irving who delivered yet another underwhelming performance.

Even the return of Marcus Smart couldn’t provide the necessary spark for Boston to get back in this series which seems all but a given to end with the Bucks moving on to the Eastern Conference finals while the Celtics will have their season end in the second round – the quickest postseason exit for Boston since 2016.

For the past seven months and 90 games, we’ve been waiting for these Celtics to put it all together. Waiting for the team that has as much talent as any squad in the league to play as a unit, with poise and purpose. Waiting for them to cruise to the NBA Finals like so many of us predicted last fall.

Last night, the Cs lost their second straight home game and fell behind 3-1 in the series against Milwaukee. It was a night when they simply had to show up, had to meet expectations, had to win. But just as they’ve done so many times this season, they disappointed us.

They looked okay in the first half; then the third quarter came. In Games 2-4 combined, Boston was outscored by 40 points in the third period. The margin in Game 4 was 33-23 Bucks – but how they did it tells the whole story about the differences between these two teams.

The Celtics led, 67-65, with 4:12 left in the third. Giannis Antetokounmpo and Khris Middleton were on the Bucks bench with four fouls apiece, so Boston was in great position to take control. Instead, the Celtics went cold while the Bucks got balanced contributions from their bench players – Ersan Ilyasova, Pat Connaughton, Sterling Brown, and especially George Hill – to lead 80-72 going to the fourth. It was a huge missed opportunity.

The lead grew to 12 before Boston briefly rallied to within 5, but it was false hope. A Brook Lopez triple and a Giannis and-one restored Milwaukee’s lead to 11, and that was pretty much the end. The Celtics simply couldn’t get the stops that might have given them one more chance.

The fans in the Garden and on Twitter were obviously crushed, but the diehards and media who’ve been watching all season were not surprised by this disintegration. Not one bit. Let’s let them tell the story.

We saw SO many games that looked like this on the Garden floor this year and we kept telling ourselves the team would snap out of it. Feels like this is them

The Bucks leading with Giannis and Middleton on the bench tells you about all you need to know about the Celtics right now. Milwaukee's backups are simply playing harder and staying together as a team.

63-61 Celtics when MIddleton went to the bench.

19-9 run in 6:20 for Milwaukee without Giannis AND Middleton. That's just inexcusable

Quick 7-0 run for the Celtics, and the TD Garden is resuscitated.

The Celtics are about to do what they’ve been doing to us all season:

Give us just enough hope to get excited, but ultimately shit the bed and disappoint us all.

Giannis has punished the Celtics every time they try a stupid switch on him.

I expect nothing and am still let down

The boos coming down, fans leaving early. This could be the last time Boston sees this Celtics team and nobody seems too upset about that.

Some real boos now as the Cs just provide no resistance on defense. Layups.

Celtics got a friendly whistle, the Bucks are 8-36 from 3PT, and we lost a must win by double-digits.

The team isn’t, and has never been, any good.

Zero togetherness is what I’m getting from watching the Celtics and Coaches tonight! Showed no heart and played Selfish basketball tonight! The Greek and Bucks imposed their will in every way possible. Very disappointed.

Technically, the series isn’t over. The Celtics could win Game 5 to stay alive, and could even win three straight to steal the series. Truthfully, however, there’s a better chance of prime Bill Russell and Larry Bird walking through that door.

The truth is, the offseason has effectively begun, and Danny Ainge has work to do. It’s about to get crazy, G.

It’s not just a coincidence that Smart’s first game in this series just so happens to be the first game that both Giannis Antetokounmpo and Khris Middleton get into foul trouble.

Along with his defense, Smart’s role as a playmaker put some of his teammates in a better position to score or at least draw fouls.

But Smart’s play like that of most of his teammates, was not enough to withstand a Bucks team that after four games have simply been the deeper, better-playing, better-coached squad.

Smart is well aware that the odds are heavily stacked against the Celtics to win another game let alone rally back to win the series.

But if you know anything about Smart, you know he’s not the type to give up or give in to defeat easily.

NBC Sports Boston: Marcus Smart: “Game 5 has to be a dog fight”

Smart’s return from injury was cause for giddiness throughout Celtics Nation. Unfortunately, the anticipation was greater than the results.

Marcus took 7 shots, all of them threes, and made just one. He didn’t have any memorable moments either. Still, it was good to see him out there and get a game under his belt. Again, there’s almost no chance the Celtics can come back to win this series, but maybe Smart can at least help make Game 5 interesting.

Listen, part of what makes great players great is their irrational confidence. Irving almost certainly believes that the answer to a bad 22-shot performance is putting up 30 shots.

What he probably should have said is that he’s frustrated with himself. That’s he’s disappointed that he hasn’t been able to pull himself from this funk, particularly after suggesting he needed to do more after his initial Game 2 struggles. That night he said all the right things About how Boston brought him here to perform on the big stage.

But he hasn’t. And he doesn’t quite see the problem that Playoff Kyrie has gone missing.

Marcus Morris was critical of the Celtics’ performance in their 113-101 loss to the Bucks in Game 4. After the game, he said the following about the team’s execution, per our own Chris Forsberg.

“The difference is we’re just playing basketball. We’re playing the game plan, the ball is moving, and, I’m sorry to say it, but our offense is dictating our defense. We miss shots, we’re not getting back. I feel like we’ve been pretty soft.”

If everyone played like Mook last night, maybe the result would’ve been different. Morris was scrapping and clawing the entire game, on one play diving into the second row to try to save a possession. He was also productive: 18 points on 5-10 shooting, plus a team-high 14 rebounds and 2 assists.

Jaylen Brown was aggressive, too, with 16 points and 7 boards. Al Horford and Jayson Tatum scored 20 and 17, respectively, but it seemed like they struggled all night. Nothing came easily for them.

Boston’s bench again was destroyed by the Milwaukee subs, 32-7, led by Hill with 15 points. Smart had just 3 points, while Terry Rozier and Gordon Hayward made only one basket apiece and together didn’t register even one assist. They couldn’t have been more invisible or unproductive.

And, finally … Kyrie was a mess. The man who talked about saving his best for the playoffs finished with 23 and 10 assists, but he didn’t come close to the superstar production and efficiency everyone was expecting. He made just 7 of 22 shots and spent the night forcing his offense. Kyrie has now hit just 31 of 83 (37.3%) in this series, including 6 of 25 (24%) from the arc. It’s been a woeful performance.

Remember in the preseason when Kyrie said this? “If you guys will have me back, I plan on re-signing here next summer.” Right now – and this is based only on unscientific random Twitter observation – a good percentage of Celtics fans would not “have (him) back.” That’s how troubling this season has been.

We’ll give the last word to none other than Charles Barkley. We love to hate Chuck, but it’s hard to argue with this.

NBC Sports Boston: Bucks do what no team has before against the Celtics in Game 4

Globe: Bucks pull away, push Celtics to brink with Game 4 win  |  Marcus Smart returns but makes little impact in Game 4 loss  |  You’ve got to have heart — and the Celtics are not showing any  |  ‘Playoff Kyrie’ has fallen short of expectations  |  It’s tough stopping freakishly good Giannis Antetokounmpo

The Ringer: The Celtics Have No Answers—for Giannis or for Their Season From Hell

MassLive: |  ‘I love you, Coach’: How a summer in Miami built a bond between Marcus Smart and Jay Larranaga, and transformed his shooting