Your Morning Dump... Where the C's might not want to overpay for AD 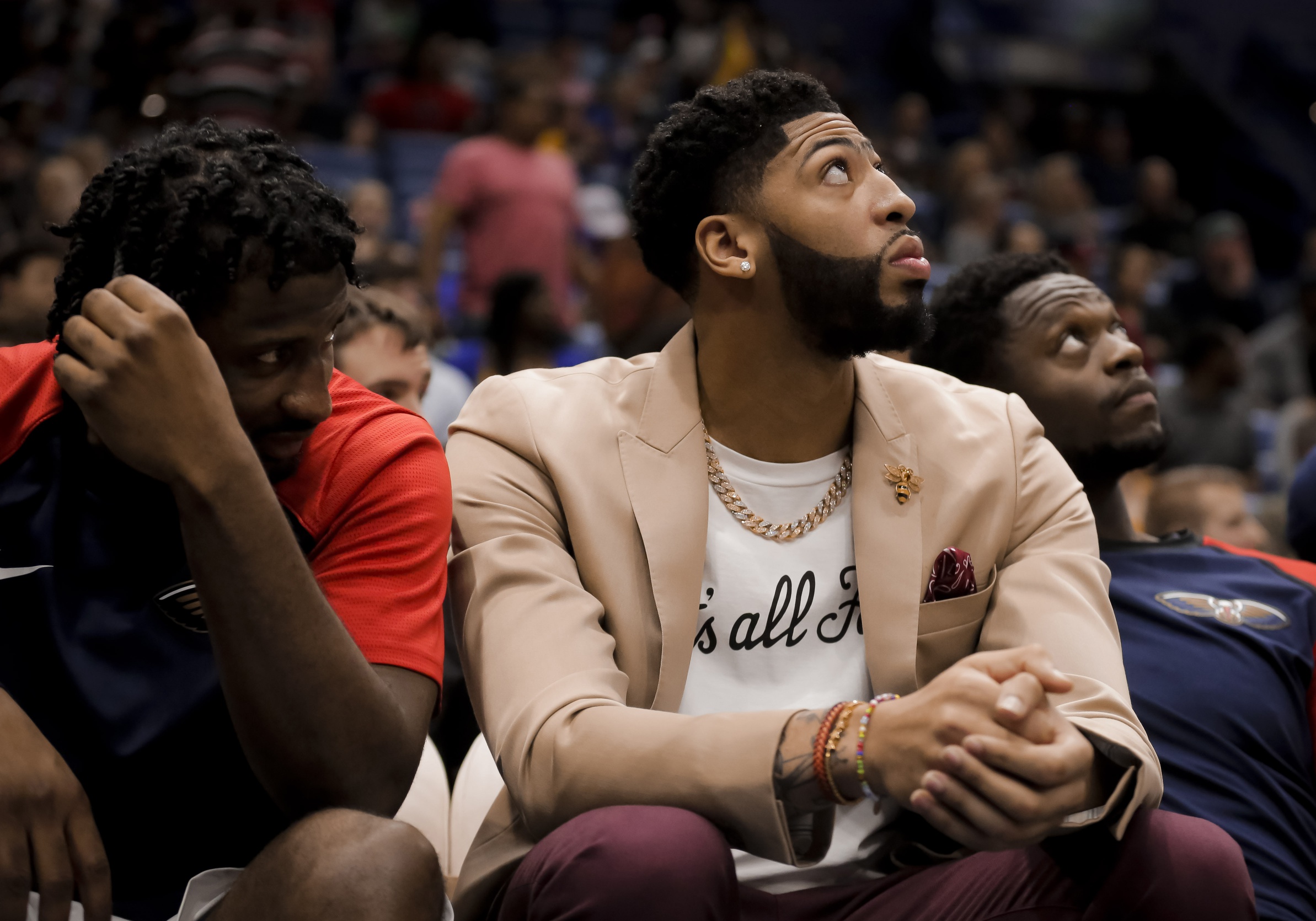 Your Morning Dump... Where the C's might not want to overpay for AD

The Lakers vaulted to the No. 4 pick in this year’s draft and can add that gem — albeit in a draft where the buzz currently surrounds the top three players — to last year’s mega-offer, which was some combination of Brandon Ingram, Kyle Kuzma, Lonzo Ball, Josh Hart, and L.A.’s future first-round picks.

The Knicks whiffed on the top spot but landed at No. 3 and could package that with Kevin Knox, Dennis Smith Jr., Mitchell Robinson, and some of their draft assets like the 2021 unprotected first-round pick acquired from Dallas in the Kristaps Porzingis trade. While missing out on Williamson made the path a bit tougher, there’s still a path to a super-team if the Knicks can recruit free agents Kevin Durant and Kyrie Irving before flipping assets for Davis, but it got a bit trickier by not winning the lotto.

When people say that the Celtics can make the ‘best’ offer for AD, I always feel that statement should come with a caveat: The Celtics may not make that offer. Danny Ainge doesn’t overpay for traded players. The Lakers, for instance, are willing to gut their rotation in order to add Davis. Now, from a certain angle, that looks much like what Boston did to acquire Kevin Garnett. But guys, that was twelve years and two CBAs ago. The league has changed.

And I’m not certain that I’d put AD in the same bin as KG. Strictly in terms of what they do with the basketball, they might be comparable. However, KG brought a ton of intangibles, and I just don’t see that from AD.

If anything, the AD situation is comparable to the Kawhi Leonard situation. Disgruntled star in final year of contract wants out. Toronto got Leonard for a pick and DeMar DeRozan. That puts a price on AD of, say, two first round picks and Al Horford. If any other team is willing to top that offer, let ’em.

It’s also curious, to me, that the Pelicans have (a) hired David Griffin and (b) are trying to patch things up with Davis. With Davis being represented by Rich Paul, small time hustler turned NBA agent, hiring Griffin could backfire.

Rich Paul’s understanding of the world of basketball seems largely confined to what LeBron tells him, and LeBron might have liked Griffin at one time, but by the end of his second tenure in Cleveland, LeBron was complaining about the roster, complaining about moves that weren’t being made, and refusing to say anything in support of Griffin while he was trying to negotiate a contract extension.

Thus, I doubt that hiring Griffin will do much to interest Davis in sticking around. Not if he’s getting his opinions from Rich Paul, and his stupid conduct this past season suggests that he is indeed taking advice from a guy whose business before meeting LeBron consisted of selling jerseys out of the trunk of his car.

According to the Athletic’s Darnell Mayberry, one team that might take a long look at Rozier is the Chicago Bulls.

From Mayberry: “Aside from (Patrick) Beverley, Boston guard Terry Rozier is on the Bulls’ radar, commanding Chicago’s attention with fearless play and hard-nosed defensive effort. Inside the Advocate Center, there is genuine belief that Rozier could be exactly who the team needs.

Mayberry adds that it’s unclear which of Rozier and Beverley the Bulls would prefer, but Rozier fits the team’s timeline a little better, given that he is six years younger.

The Celtics can match any offer sheet Rozier signs with another team, which means Rozier has very little say over where he plays next season — his biggest bargaining chip is the qualifying offer, which he could take in order to become an unrestricted free agent next season.

Because they’re just the kind of dopes I’d expect to sign Terry Rozier to an offer sheet because they think he’s Marcus Smart.

If anything, I’m prone to overestimating inertia in the NBA. I don’t think Kyrie’s going to leave because there’s not many attractive spots* for him to go to, and because he seems like the kind of guy who is going to take this year’s playoffs personal and tear up the league next season.

So I don’t think there’s any reason for the Celtics to even give Rozier a qualifying offer come July 1. If the Bulls want to sign him because they have him confused with Marcus Smart, well, don’t let the back door hit ya where the good lord split ya, Terry. If the Knicks want to Joakim-Noah him after they strike out on KD and Kyrie, well, bite the Big Apple, Terry. Don’t mind the maggots.

*New York is not an attractive spot. Period. Don’t even try to get that nonsense going. The Knicks suck and Brooklyn is full of question marks.

“I sacrificed, obviously, my talent I think the most,’’ said Rozier, who shot 38.7 percent from the field this season and had more touches on offense than any other player besides Irving. “Me being out there and given my floor style of play, how I play, how Terry Rozier plays, I feel like I couldn’t be that person.”

“And why do you feel you couldn’t be that person?,’’ asked Smith.

“I was obviously in the shadow of some guys,’’ said Rozier. “I feel like . . . a lot of . . . the ball was either in Kyrie or Gordon Hayward’s hand most of the time, so either Terry Rozier is in the corner or I’m on the bench.”

Rozier’s comments were self-indicting if not downright delusional. If “I’m a top-notch point guard in this league” wasn’t the most absurd thing he said, it’s only because he praised the Knicks as a great organization.

Chad Finn with the rare nugget of an article available outside the Boston Globe’s paywall.

See, here’s where I’m at with this whole Terry Rozier thing–and why I’d give you at least even money that the Celtics won’t even extend a qualifying offer.

For us, this is all we’ve seen of Terry Rozier. He spent most of the season saying more or less the right things to the media, but the quality of his play suggested that he was ticked off by his new role outside the spotlight.

Now we know just exactly how ticked off he was–and for a guy to be willing to say what he said on the record, you pretty much have to assume that he spent the season saying a lot worse in the locker room and with his teammates.

If anything, the Celtics should have done more of what Rozier accused them of doing.

David Fizdale does not appear he will add his former Memphis assistant .JB Bickerstaff to Knicks staff. Per source, Celtics HC Brad Stevens interviewed Bickerstaff last night at Chicago combine. Celtics is losing assistant Micah Shrewsberry to Purdue. JB had been up for Cavs HC.

I’m not sold on Bickerstaff–he’s not an ex-player, and he’s just kind of got that stale NBA retread feel to him.

Like, he seems interchangeable with any of probably 30 or 40 other guys who kind of hang around the NBA’s coaching and analyst spots, just sort of drifting around from job to job leaving behind a trail of mediocrity.

Of course, Kendrick Perkins would like that Celtics’ assistant job too. I don’t think Perk’s going to get it. I don’t think the Celtics are going to hire a guy with zero coaching experience at any level just because he used to be a Celtic. That worked back in the 60s and 70s. It doesn’t work anymore.