Your Morning Dump... Where Danny Ainge speaks and we listen 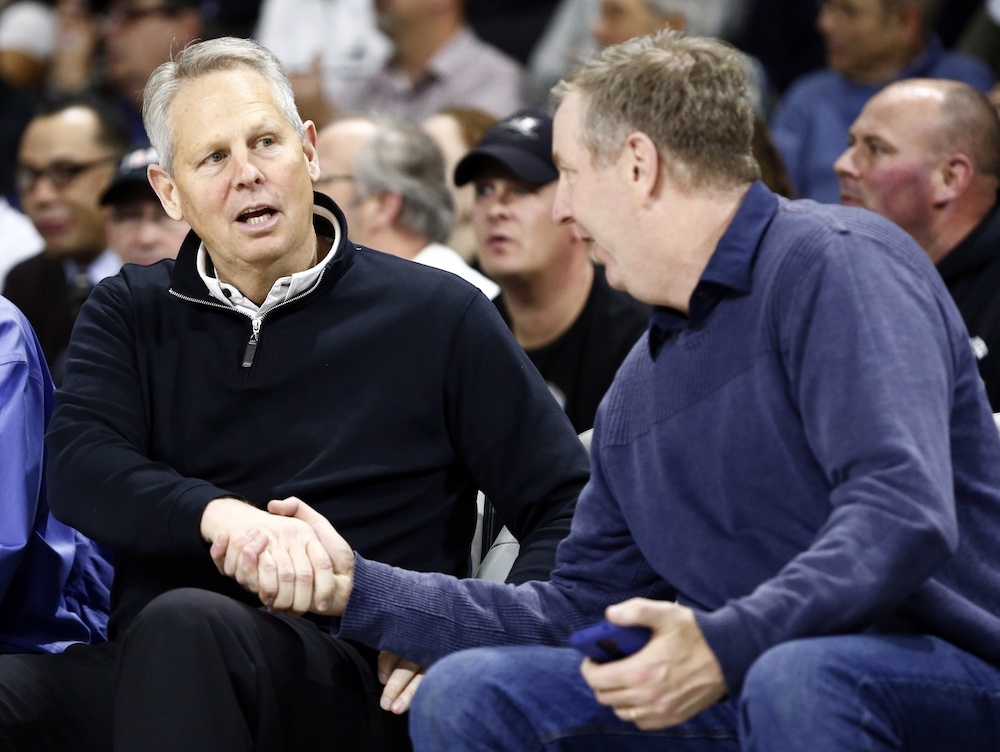 Your Morning Dump... Where Danny Ainge speaks and we listen

Danny Ainge, despite a recent heart attack, has been a regular presence at the practice facility, lobbing jokes and working just like any other day. The basketball life is what he loves, and the Celtics president of basketball operations vowed Wednesday he has no plans of stepping away.

“My role is not going to change,” Ainge said.

Ainge said the heart attack, which occurred in late April while the Celtics were in a second-round series against Milwaukee, did not force him to miss much work. The doctors recommended that he avoid watching Celtics games in the immediate aftermath, but he only missed one before deciding that was more stressful.

An early commitment from Irving could persuade the Celtics to be more aggressive in the Davis sweepstakes, but the timing of everything only complicates a high-stakes offseason.

Ainge isn’t expecting a first domino to fall to kick it all off.

“There’s a domino that would fall if it was my world and wanted to do everything that I wanted, but it doesn’t work that way,” Ainge said. “So we’re just prepared for lots — like right now, today, we’re preparing for the draft. We’re preparing to make draft picks and at the same time this afternoon we’ll probably be looking at (a) possible trade of those draft picks.”

The Athletic — King: 8 takeaways as Danny Ainge launches Celtics into the summer of Kyrie

Before parsing any of Danny Ainge’s responses to reporters’ questions, let it be said that it’s a relief to see and hear Danny Ainge again, seeming lively and like himself. Obviously, this summer should be anything but stress-free, but hopefully, he is able to continue to take time to recover even during the busy months of June and July.

Ainge spoke on a lot, as both Jay King and Brian Robb addressed in point-by-point articles yesterday, but the juiciest and most paramount stuff comes about Kyrie. Ainge referenced there being plans A-Z this off-season and A-M likely all involve some iteration of Kyrie Irving staying or going. And of those, maybe A-G involve Kyrie Irving staying and Anthony Davis joining him. Whether that’s a scenario you want or not, it’s hands down the scenario that most quickly pushes the Celtics back into the upper crust of finals contention, and so we can assume it’s the one Ainge is gunning for.

And so for that reason, while Ainge demonstrated no visible or audible frustration during yesterday’s press briefing, his words seemed to indicate that in order to start pushing towards his “plan A” he’d really like to know what Kyrie Irving is going to do.

What Ainge and Co. do on draft night could imply that he does have some sort of declaration from Irving, but otherwise, he may be best served by just checking out Kyrie Irving’s Instagram between now and June 30th, as that seems to be telling all of us something.

Alright, guys, what does this all mean?!?

This video plus everything Stephen A. and Rich Bucher and others are telling us points quite emphatically to Kyrie Irving leaving Boston this off-season.

On the flip side, those talking heads get paid to make bold claims that aren’t always true, and Kyrie Irving, who seldom posts to social media, has every right to get nostalgic for his childhood days as he sees a reminder of his youth still doing his job years later. But then, add this photo to the rumor pile:

This is not a drill. Kyrie Irving just spotted in New York walking into a townhouse on 72nd St between 2nd and 3rd wearing his biggest smile of the past year pic.twitter.com/c110JPjyfx

We’ve officially hit the silly season that occurs before the start of free agency. As Celtics fans, we’ve really never had to deal with this before. But unlike with most free agency decisions (Jazz fans in Utah, Thunder fans in OKC), even if Kyrie is packing his bags to go hang with his childhood crossing guard as a member of the Nets or Knicks, it won’t leave Celtics fans totally crushed.

Maybe Kyrie and certainly a number of Celtics fans are hoping Kyrie walked into that condo and doesn’t walk out until the start of the season at Barclays Center.

And finally, is The Truth finally coming clean (or, actually, dirty)?

"I just had to go to a bathroom."@paulpierce34 admits the only reason he left the 2008 Finals in a wheelchair was to go to the bathroom 😂 pic.twitter.com/oIUXgzDzT7

Paul Pierce has embraced an antagonistic persona on ESPN’s NBA pregame show. He’s engendered “Paul Pierce sucks” chants in Toronto, probably can’t find a table at which to eat in Milwaukee, and sometimes it seems like Chauncey Billups and Jalen Rose want to smack Pierce on the side of the head for some of his truly out there takes.

But in Boston, he’s still our guy, and he can say or do anything up there that might draw the ire or confusion of other fan bases, but not us.

So, last night, when Paul Pierce claimed that he took his famed ride in a wheel chair into the Garden locker room 11 years ago, he was taking it to ride the porcelain express.

Is he telling the truth, or just playing up his antagonistic schtick?

There is zero doubt in my mind Pierce is joking around, but this joke is going to take a life of its own. Once something like this gets onto the internet, it belongs to the masses.

And those masses aren’t only celebrating after having speculated for years that Pierce played up his injury to get to the bathroom quickly, but are now bringing back an even wilder and messier rumor related to the Pierce wheelchair incident:

What Pierce omitted though is whether he had already pooped himself and was trying to cover it up, which is something people have long speculated. The Truth needs to answer about that part.

Even though we got an answer last night from the man himself, it only opens up so many new questions.