Your Morning Dump... Where we should get ready to love Grant Williams 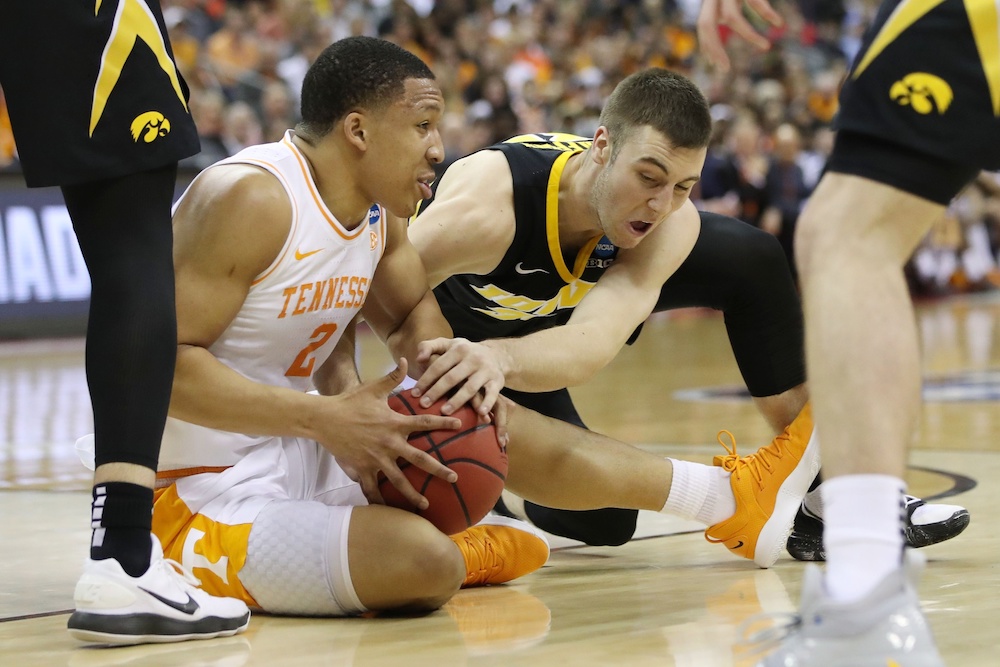 Your Morning Dump... Where we should get ready to love Grant Williams

In the midst of 30 straight minutes of hugs and tears, his grandfather Otto Johnson came to him to deliver the message he had been dreaming of ever since Grant first picked up a ball.

Johnson had been making that promise ever since it became clear his grandson was going to make it to the NBA. Williams’ younger brother became a Patriots fan and his oldest is a Bruins fan. For some reason, his family from Charlotte had always just naturally gravitated toward Boston teams.

“He was just talking about how much he would love it if I end up playing for Boston, because he would always come visit me,” Williams told The Athletic. “The fact that it actually happened and to see his face, that was one of the best things that happened last night.”

The Athletic — ‘I’m proud of you, boy, you’re going to my team’: As Grant Williams joins the Celtics, a grandfather’s dream comes true

Even before we had our assumptions rocked last week when news leaked that Al Horford would likely leave, finding the next Al prototype in the draft was on the wish list.

And while it would be nice to have an Al protege learn directly from Big Al in Celtics green, read enough about Grant Williams, and you’ll just be glad that the Cs found someone who has the potential to fill some of the holes Al will likely leave behind in a week and a half.

We’ll of course have to see how it works on the court, and obviously there will be growing pains, but I personally can’t wait to root for this kid. In addition to his draft day exchange with his grandfather making for a feel-good family moment, it seems as though we’re going to love Williams’ work ethic:

Turner calls him a workhorse, fondly remembering when Williams had to fly from Los Angeles to Knoxville for college graduation in May — he earned a Bachelor of Science in supply chain management with a concentration in marketing in just three years — and wanted to squeeze in a 5 a.m. workout before his 8 a.m. flight. Most players will hit him up with a few hours’ warning, but Williams had it planned out well in advance. Williams said he wants to spend his days at the Auerbach Center with three-a-day practice sessions, with an extra session early in the morning.

“I love to be in the gym, so it’s going to be more about people reeling me back in and saying, ‘Hey, relax,’” Williams said. “I want to work on each facet of my game, whether it’s guard skills, conditioning, movement, or things I already do well like vision, passing and the way I score out of the midrange.”

The Celtics will have to reel him back at times throughout the year to avoid stumbling into the rookie wall, but that fervor is one of his greatest strengths.

No offense to the Timelord, but that travel management is second-to-none.

And as it comes to replacing Al, we’ve covered this during previous Dumps this week, but Williams’ strengths have some Al-like qualities:

He particularly sees a role for himself similar to Horford and [Draymond]Green on the short roll, where they can put the ball on the floor and read every passing angle. He can pass to every spot on the perimeter from the low post as well, allowing the Celtics to use him at the five and target switches to put him in the post.

Grant Williams may never sniff Al Horford’s ceiling in the NBA, but as Green Teamers reel from losing a fan favorite and a perfect modern small-ball 5, we can take solace in the fact that there’s a 6’7 big brimming with potential and the will to improve arriving on our doorstep. After reading Jared Weiss’ piece this morning, I’m pumped to have Grant Williams on the team.

On page 2, if the Cs had a do-over would they have dealt Kyrie in February?

How bad did it get between Kyrie Irving and his teammates this season?

On NBC NBA Insider Tom Haberstroh’s podcast, Ryen Russillo, ESPN podcaster and host, was asked for his take on how, as Haberstroh put it, “the whole soul of the team was ripped out in like two weeks” with reports of the impending free-agent departures of Irving and Al Horford.

Rusillo said Irving’s Celtics teammates told him during the season it got pretty bad.

“I think they should’ve moved on from Kyrie. Because it was THAT bad,” Russillo told Haberstroh. “People around the team, some guys who had never said anything to me, guys are like, ‘It’s just time.’ But you know, you don’t want to lose that asset for nothing. So, I think the Celtics were still trying to figure out a way to salvage it. It’s not a trade demand, but it’s mimicking the same things from like two years ago [when Irving wanted out of Cleveland] where once Kyrie shuts it down, he shuts it down.”

Once Kyrie makes it official (if any team actually wants to take this enigma on at max money, that is) and leaves Boston, you have to believe more and more anonymous sources are going to spill dirt on just how toxic the atmosphere was in the Boston locker room last season. And we’ll have to sift through the likely smear campaign and remember that not all of it was Kyrie’s fault — there are two sides to every locker-room-gone-wrong story that inevitably follows a nightmare NBA season.

However, if it was as bad is it was made to seem, and Kyrie Irving was such a big part of the toxicity, why didn’t they deal him out west at the deadline? Was it the hope of Kyrie and AD in 2019? Was it a faint belief that once the team got to mid-April the maelstrom would subside and the Celtics would turn things on?

There were reports that the Clippers inquired about Kyrie last February and that the Celtics shot things down immediately. Imagine if the Cs pulled the trigger and extracted Montrezl Harrell and/or SGA in return? It’s even possible that the deal would have had the same effect on the Celtics as the Tobias Harris deal did on the Clippers. The Cs could have taken off in the wake of removing Kyrie from the equation.

Alas, we’ll never know because the Celtics never seemed to really consider it (at least not that iteration of an Irving deal. Remember, there were some cryptic Kyrie comments immediately after the trade deadline that talk radio sleuth attempted to parse as evidence that maybe the Celtics entertained dealing him) and you can’t blame them for it now with the benefit of hindsight.

At the same time, we might be able to blame them if we find out in the coming weeks that by last February, the situation had become unsalvageable and the Cs front office displayed hubris in believing that the playoffs would somehow wipe the slate clean.

And finally, odds and ends on potential free agents

One of the best X and O’s in the game.. players coach but not afraid to try all types of lineups… Rewards playing time by playing smart but Hard.. heard only good things https://t.co/2PgCNqm1FC

An intriguing buy-low option for the Celtics heading into next year? Rondae Hollis-Jefferson. The Nets declined to make him a qualifying offer last week, which makes the 24-year-old an unrestricted free agent. — Boston Sports Journal

How would you feel about Willie Cauley-Stein as your starting center? Jared Dudley as your veteran presence on a young roster? Ronda Hollis-Jefferson as your next Jae Crowder dirty-working wing? Rich Jensen broke down the Celtics’ paths forward yesterday and one of them included patching together a deep roster with mid-priced veterans instead of swinging bigger on a 20+ million dollar a year player and using exceptions to fill out the rest.

The Celtics desperately need an NBA-ready big man who has actually started some games in the league and WCS can be that guy. Maybe a fresh start on the other coast with some actual coaching stability could be just the thing he needs.

Dudley has mentioned wanting to come to Boston before. He has the local roots from his college days at BC and this team is going to need a veteran voice or two on it. I’d be all for it if the price is right (low).

I don’t think the Celtics will be willing to go as high as they might need to in order to nab RHJ. 24 year old wings don’t just appear on the market and then fly under the radar, and the needs at the point guard and in the front court dwarf the need for wing depth. At the same time, Brad loves his super switch-y wings, so don’t count it out.

The NBA’s second season is less than 10 days away!

The Floor Seat 8m ago