Your Morning Dump… Where the Celtics love their rookies, and we do too 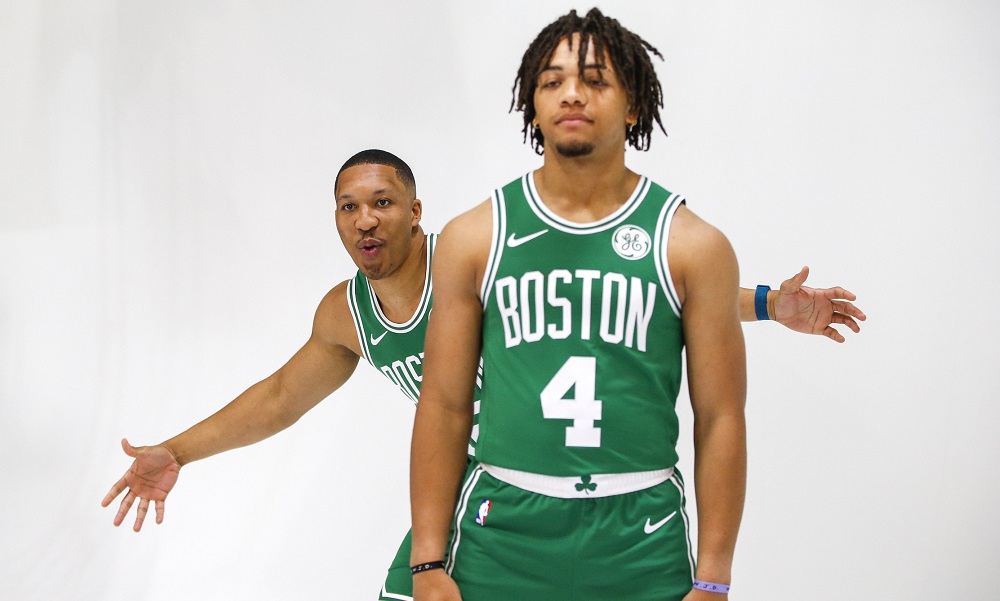 Your Morning Dump… Where the Celtics love their rookies, and we do too

Two things that all the Celtics rookies have in common: They can play, and everyone likes them on and off the court. Those principles came through loud and clear during last night’s blowout win at Orlando.

It is very clear that Tacko Fall's teammates love him. That the coaching staff is excited about his potential. Everyone I've talked to today has great things to say about him as a person, and also his improvement as a basketball player. He has a real chance to make the roster.

A Grant Williams pull-up 3 off the pick-and-roll is not something I was expecting to see this early in his career.

Tremont Waters is such a great two-way guard. Really impressive perimeter defender for his size.

I asked Marcus Smart what excites him most about this team.

“I’m excited about our young guys,” he said.

Carsen Edwards didn’t wait long during the Celtics preseason opener to live up to his reputation. The rookie attempted a 3-point shot on the first possession of his NBA career, just 29 seconds into his debut. And it only took that much time because the Celtics were on defense when he first subbed in.

“Of course,” Marcus Smart said recently, “we all know about Carsen.”

The Celtics are fully aware of the college career Edwards put together at Purdue, including his memorable NCAA tournament run this past spring. The guard arrived in Boston with a longer résumé than many of the players drafted before him at No. 33 and a scouting report well known to even casual basketball fans. While defending Edwards, players better stay attached to his body. With a release as quick as his, he doesn’t need much space to get off a clean look.

Smart’s comments reflect the strong optimism surrounding the entire pack of rookies. One of the rooks we hadn’t seen, due to injury, was Romeo Langford, but last night he was finally healthy enough to take the court. The 14th pick looked comfortable and ready, just like his fellow young ‘uns.

Smart believes the rookies are ready to contribute already. Though the optimism may sound like typical training camp hype, it could be more than that. The conversation actually began with an open-ended question: What excites you most about this year’s team?

Smart didn’t mention Javonte Green, but the 26-year-old is also making an impression in his bid to make his first NBA roster.

Javonte Green is still yet to miss a shot in preseason.

Then there’s the most popular rookie of all.

While Fall has become a fan favorite, he has had mixed emotions about the cheers he has received. He called them “very motivating” but also expressed that he doesn’t want to take away too much attention from other aspects of the team.

“It’s very motivating, but at the same time, it does make you feel a little uncomfortable sometimes because I don’t want to take away too much attention from what’s really important,” Fall said in an interview with Celtics.com’s Amanda Pflugrad. “Sometimes I do feel bad for coach Brad. But at the same time, it’s a blessing and I’m really thankful that I have so many people cheering me on and rooting for me to be successful.”

This just speaks to how humble Fall is, and how much he really does appreciate the fan support.

But at the same time, does being a fan favorite add extra pressure to Fall as he battles for a roster spot? Not really, according to Fall.

“No, I mean I just have to stick to what I’ve been doing so far,” Fall said. “I know what my job is and regardless of — I don’t really see it as pressure. If anything, it just pumps me up a little bit more.”

NBC Sports Boston: Tacko Fall opens up about being a fan favorite during Boston Celtics preseason

It’s going to be very interesting to see who lands on the bottom third of the roster. Semi Ojeleye and Brad Wanamaker really shouldn’t take their spots for granted.

Judging from playing time in the two preseason games so far, it seems like Edwards and Grant Williams will indeed be in Brad Stevens’ rotation. Even if the all the rookies spend most of the season with the Red Claws, it’s intriguing to think about their potential impact, whether now or, more likely, a year or two from now. And surely, it doesn’t hurt to develop new talent – you never know when you’re going to find the next hidden gem. We all know Isaiah Thomas was the 60th pick.

Related – NBC Sports Boston: Brian Scalabrine on Tacko Mania: I know what it’s like and I’m all in  |  Ex-coach Johnny Dawkins on Tacko Fall: ‘His room for growth is astronomical’

Earlier this week, ESPN ran a story about Jayson Tatum’s improved shot selection with the headline “The de-Kobe-ing of Jayson Tatum has begun.”

At the heart of the story is the notion that Tatum’s work with Kobe Bryant in the summer of 2018 instilled in him the wrong kind of “Mamba Mentality.”

Bryant is Tatum’s NBA hero, and he’s known for taking difficult mid-range shots. Tatum took too many of those kinds of shots last year. In two preseason games so far, he’s eliminated those in favor of more efficient shots, leading to stories like that one on ESPN.

“I’m still going to shoot the mid-range,” Tatum said after the Boston Celtics blowout of the Orlando Magic. “I seen all the people talking about the de-Kobe-ing. No, Kobe didn’t teach me anything bad. Everything we talked about and he showed me was great.”

“Everything he [Bryant] showed me was great,” Tatum said following Boston’s 100-75 preseason win over Orlando in which he had 15 points, five rebounds and three steals. “The jump that I didn’t make that everyone expected [last year], it was not his fault. He’s one of the greatest ever, so … everything he taught me I’m very grateful for and helped me.”

“Nobody looked good last year,” Tatum said. “I got better last year just not what people expected, what I expected. I take full responsibility. That’s why I’m excited about this year.”

OK, Jayson, we’ll take your word for it. Also, this probably never happened:

Tatum “So when I pass out of the Double”

Kobe “When you what?” pic.twitter.com/HAmtEGAgD4

We kid, but there is a positive development here.

No, but this whole de-Kobe chatter may have taught Tatum the best lesson of all: Ownership. He has taken full responsibility for last season and it might just be the most encouraging sign that the 2019-20 season will be different for both Tatum and the entire Celtics team.

A more mature Tatum takes the Celtics’ ceiling and elevates it far beyond the expectations entering the season. And every single indication, but especially Tatum’s comments Friday, suggest he’s learned from last year and has positioned himself to make the leap that most were waiting for a year ago.

We’ll take that all day, all season.

And, finally… A wise decision

#NEBHInjuryReport Kemba Walker will not play tonight. He went through shootaround, but has since been ruled out with a sore knee.

Kemba has missed just six games during the past four seasons. This was only a preseason game, so of course the organization was cautious. No one wants this to become a thing.

Boston Sports Journal: Four takeaways from the Celtics’ 100-75 preseason win over the Magic