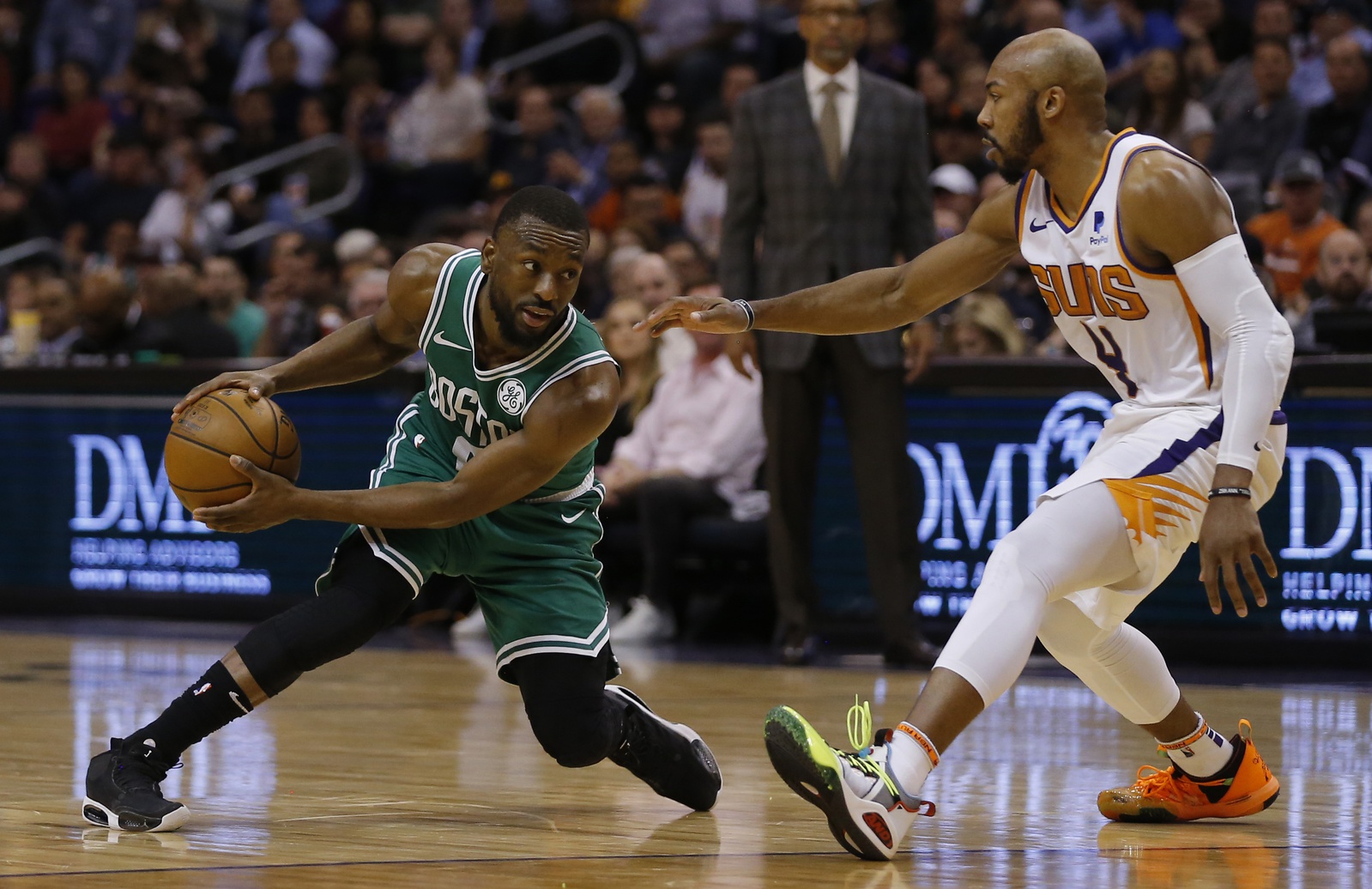 The situation turned when Brad Stevens reached into his bench. Enes Kanter scored twice to start the C’s on a 17-6 run that gave them a 26-22 lead after one frame.

The Suns stormed back in front with nine straight points beginning a few minutes into the next period, but, coinciding with Grant Williams’ first appearance since last Friday against the Warriors, the Celtics took off.

The C’s were much more physical on defense — on both ends of the floor actually — and it helped, as well, that Walker and Smart hit 3-pointers to kick-start the offense. The bottom line was a 23-6 run that gave the Celts a 57-42 lead over the Suns at the half.

Slow starts had been the C’s main weakness during their ten game winning streak, and against Sacramento on Sunday, the team only scored 18 points in the first quarter and allowed the Kings to score 30. Last night, the ‘slow start’ lasted only 8 minutes, which is definitely an improvement, and the C’s margin at the half, 15 points, was pretty close to the margin of victory (14), marking a level of consistency that the C’s hadn’t shown since they beat San Antonio two weeks ago.

And though his stat line was rather quiet, with four points against five fouls, Grant Williams was a key contributor, logging a +18 over not quite 18 minutes of playing time, including blocks on back-to-back possessions:

“The blocks are cool but it’s all about rotations,” Williams said. “There’s a time where I got beat and Kemba (Walker) came out and took my man and I went to his, so it’s about multiple rotations and the effort we play with, and that’s something that a lot of teams don’t do or you don’t see, especially from your star players.”

The rookie’s humility is endearing, but the fact remains that he made two of the most important defensive plays in a key stretch of what ultimately became a blowout. The rest of his stat sheet might seem unremarkable, but his impact was noticeable.

“Grant Williams really came and gave us a spark off the bench,” Jayson Tatum said. “Just stuff he does that doesn’t show up in the stat sheet that really helps our team and gives us energy and life.”

There’s a little bit of Marcus Smart in Grant Williams’ play. While his shooting woes from beyond the arc (he’s 0-16 thus far) are a major factor in his anemic offensive rating (84 pts per 100 possessions), on the other end, his defensive rating (103 pts per 100) is the best of any C’s rookie that’s logged volume minutes.

Williams is not a stat stuffer in the conventional sense, but it’s not difficult to see why he’s the first rookie off the C’s bench when you watch him play. He’s a smart player who’s picked up the principles behind the C’s defense rather quickly.

5. At some point, the Celtics might want to shut Marcus Smart down for a bit.

Smart sprained his ankle on Monday. To recap, that’s a sprained ankle which he had already tweaked, an injured hip and two sprained fingers.

That’s all great, but at some point, the Celtics should probably consider giving Smart some time off. He’s too valuable for this team, and recent NBA history suggests further injury is not only possible, but likely if Smart continues battling through nicks and bruises.

Count me as one of the guys in favor of “load management”. By the time I was old enough to really appreciate what basketball was all about, Larry Bird’s career was essentially over.

The seemingly endless NBA season (including training camp, it stretches from September to June), is as long as it is for exactly one reason:

82 games followed by four rounds of 7-game playoff series isn’t some number handed down from on high. There’s nothing magical or mystical about it.

From that perspective, it makes no sense to expect these guys to push themselves to play every game of the season, and if taking games off enables these guys to add years to their careers, I’m all for it.

Finally: Checking in with Aron Baynes

“Baynes, that’s my guy,” Brown said. “He’s crazy as hell, but, yeah, I’m excited to see him. Make sure I give him a big hug tomorrow.”

The Phoenix center-slash-beast was fed the latter part first after Monday’s shootaround.

“I mean, big hug-bit of a hit — doesn’t matter either way,” Baynes said with a grin. “It’s all good, a lot of fun. We both got a couple of hits on each other over the summertime, as well, so, you know, it’s definitely good to see those guys. And, yeah, they’re rolling right now, so it’s been fun to watch.”

Then Baynes was apprised of the “crazy as hell” portion of Brown’s remark.

“I mean, you know, that’s the pot calling the kettle black, so we’re good.” Baynes said.

Baynes is playing really well for Phoenix, leading some to question the wisdom of parting with him, but as Bulpett goes on to point out, the Celtics would’ve had a hard time keeping him and landing Kemba Walker. And while he’s making about the same amount of money as Enes Kanter, the Celtics were able to sign Kanter using a midlevel exception after signing Kemba, meaning that Kanter’s salary didn’t impact their cap space the way Baynes’ salary would have.

And Theis has proven to be a real asset on the defensive end, stepping into Baynes’ shoes.

Still, you can’t help but wonder what this new three-point-shooting Baynes would’ve looked like on the Celtics.

Celtics assistant equipment manager Andy Mannix is among those on the club who may miss Aron Baynes the most.

But Mannix’s palate is relieved.

On one hand, Baynes used to regularly take Mannix out for dinner on the road, which is always good for someone not making NBA player money. On the other hand, Baynes took delight in making Mannix eat food that most people would charitably refer to as out of the ordinary.

“That was his thing,” said Mannix before the Celtics met Baynes’ new team, the Suns. “He loved making me each strange stuff.”

Mannix laughed at one recollection.

“Once time we went to Detroit, where he obviously played before, and he’s like, ‘Want to go out to dinner tonight?’ I’m like, OK,” Mannix said. “Then I Googled the menu of the place, and there’s no menu. Every night, they change it.

“Now, first of all, I eat like an 8-year-old, chicken fingers and fries and that stuff. So then we get there and he’s got me eating rabbit, bison, like pig head, duck — just the most insane stuff.”

Told that Mannix is back to eating normal stuff now that he’s gone, Baynes said, “I don’t know about normal food. If you call doughnuts and pizza normal food, then definitely he’s back to normal food. He’s still on a junk food diet.”

That story reminds me of one of my favorite scenes in Barefoot in the Park:

MassLive: Boston Celtics’ Brad Wanamaker’s play has been ‘one of the more important things on our team,’ per Brad Stevens | Marcus Smart injury: Boston Celtics guard says he ‘should be fine’ for Los Angeles Clippers game Wednesday | Jayson Tatum, Boston Celtics bounce back vs. Phoenix Suns 99-85, despite losing Marcus Smart to ankle injury