Your Morning Dump... Where Marcus Smart did Smart Marcus things to seal the W 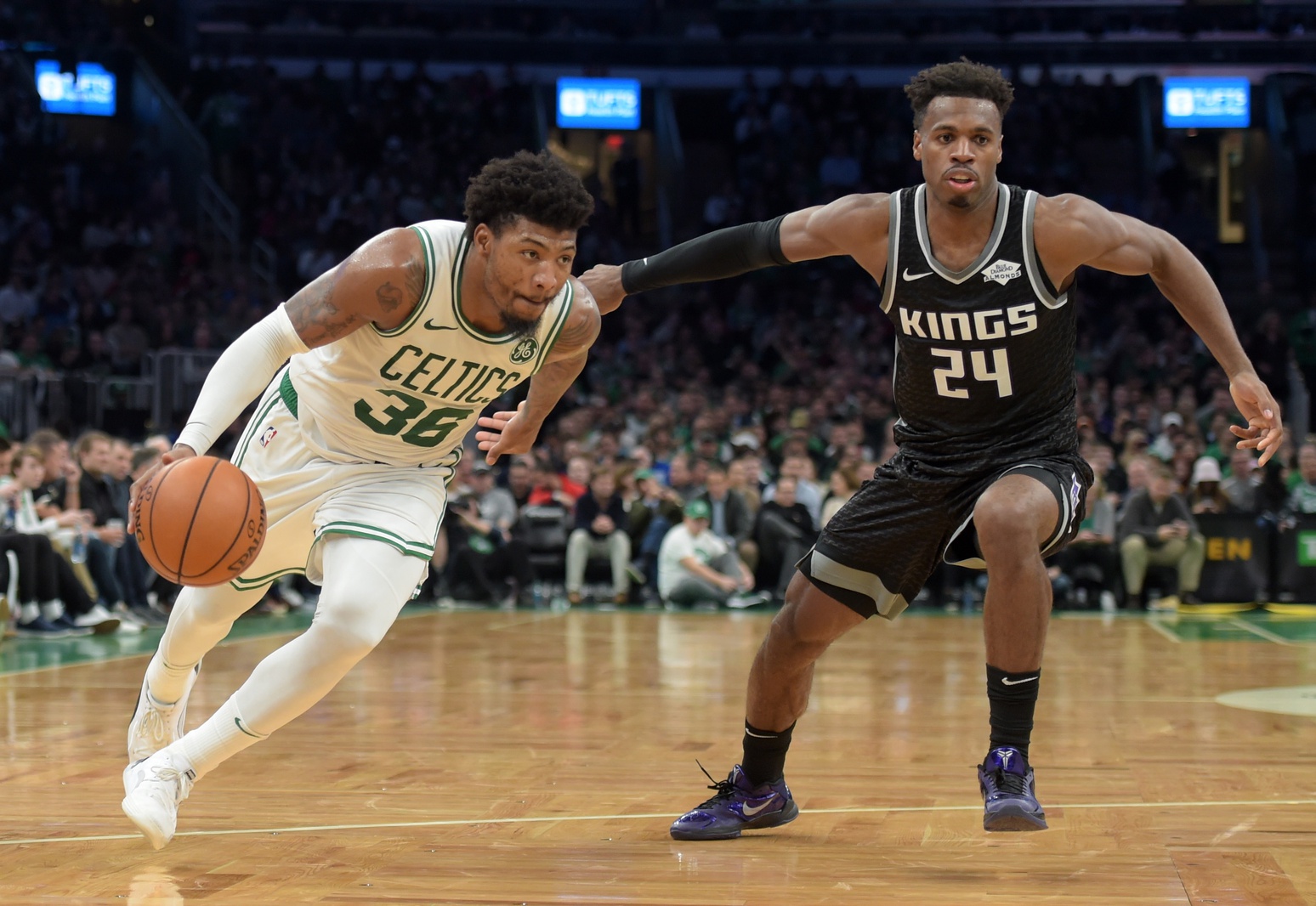 Your Morning Dump... Where Marcus Smart did Smart Marcus things to seal the W

On Monday, Smart almost single-handedly prevented the same result [another loss to the Kings]. In the final minute, he rattled in a go-ahead jumper, powered his way to the basket for a go-ahead layup when Sacramento answered, and collected a steal from Bogdan Bodvanovich that helped the Celtics clinch a wild 103-102 victory.

You know, if this keeps up, Brad Stevens may end up forced to name Smart as captain of this Celtics team. His reticence to do so seems increasingly idiosyncratic. To be sure, there’s a bit of validity to Stevens’ notion that every player should take responsibility and that he doesn’t want to create an artificial distinction between players.

However, it is plain to see that the team already considers Smart to be their captain, so giving him the title would be nothing more than an official acknowledgement of something that’s already fait accompli, and something rather different than the decision to hand a captain’s title to Rajon Rondo, which felt kind of forced.

At any rate, Smart is plenty dinged up. He left the court last night in pain, and if anybody could use a couple games off for “load management”, it’s number 36 for the Celtics.

Of course, he’ll have to be forced to take those games off.

The Celtics were down three starters last night, and as a result, they had to draw on Tremont Waters and Carsen Edwards for major minutes. Waters ended the game with 19:43 of time on the court and +20, which is pretty danged impressive, considering the team only won by a point. Granted, some of that is likely a fluke—statistical noise—still, 20 minutes of burn is a long time in a 48 minute game, and Waters was the only bench player with a positive +/-.

Every year, I keep hoping that the Celtics will get a break from the ‘next man up’ mentality, but honestly, last season’s C’s team was probably the healthiest of the Brad Stevens era, and man, they sucked.

So, bring on the scratch-and-dent Celtics, I guess, the Hospital Celtics, the Gashlycrumb Celtics, etc.

Page 2: Where we get more details on the Kemba Walker injury

“When he landed, he basically had numbness and tingling in his hands. You can imagine that kinda gave him a little bit of a shock, he was kinda freaked out by the whole thing a little bit,” Dr. Schena said. “He never lost consciousness. He basically stayed on the floor, mostly as a medical precaution. The medical staff was out there immediately.”

Walker was stabilized and put on a stretcher. Dr. Schena said the collar and spine board used were part of the full precautions in case of a spine injury.

“They had to bring him, basically, first to the back of the Pepsi Center where he had an initial X-ray done to make sure that at least everything looked pretty good, and it did. It was a negative X-ray” he said. “Then he was brought to a level-1 trauma center where he received a full neurological evaluation, a full set of X-rays were done, that was followed up by an MRI and then by another special set of X-rays once they knew that the structures were all stable in his neck to make sure the motion was intact and everything was at normal. Essentially, he had no significant structural damage to the bony architecture of his neck or the soft tissue around his neck.”

From there, Walker was evaluated by physicians and a neurosurgeon evaluated the imaging. Walker was put in a soft neck collar and was cleared to travel back to Boston where Dr. Schena and a spine surgeon Dr. Eric Carkner of New England Baptist hospital perform their own evaluations.

“He reviewed the imaging and we actually sent it to our cervical spine specialist at the New England Baptist to outrank us. So we had our own radiologist review all the imaging as well,” Dr. Schena said. “Dr. Carkner did his evaluation separate from us so that way he could do an unbiased exam, and at that point Kemba had no symptoms and he was feeling really well, and he passed the exam.”

Well, that explains a lot.

If Kemba isn’t in the concussion protocol, then he almost certainly did not lose consciousness after that collision. Also, any time you have tingling or numbness after a collision like that, they’re going to go to extreme lengths to stabilize you before they move you. Even though the risk of permanent damage either from that type of collision, or in the immediate aftermath, is pretty slim, permanent damage of that sort is life-altering, so doctors, trainers and EMTs are going to be extremely cautious.

Fortunately, it appears that Kemba’s absence from last night’s game was purely precautionary—Dr. Schena said that Kemba was symptom-free yesterday. Pending the outcome of a practice today, he could be cleared to play as early as Wednesday.

In a podcast interview released Monday with ESPN’s Zach Lowe, the Celtics guard said he saved the shard of glass that doctors removed from his shooting hand

Yep. That sounds about right.

Smart went on to reveal that he still has pieces of glass in his hand.