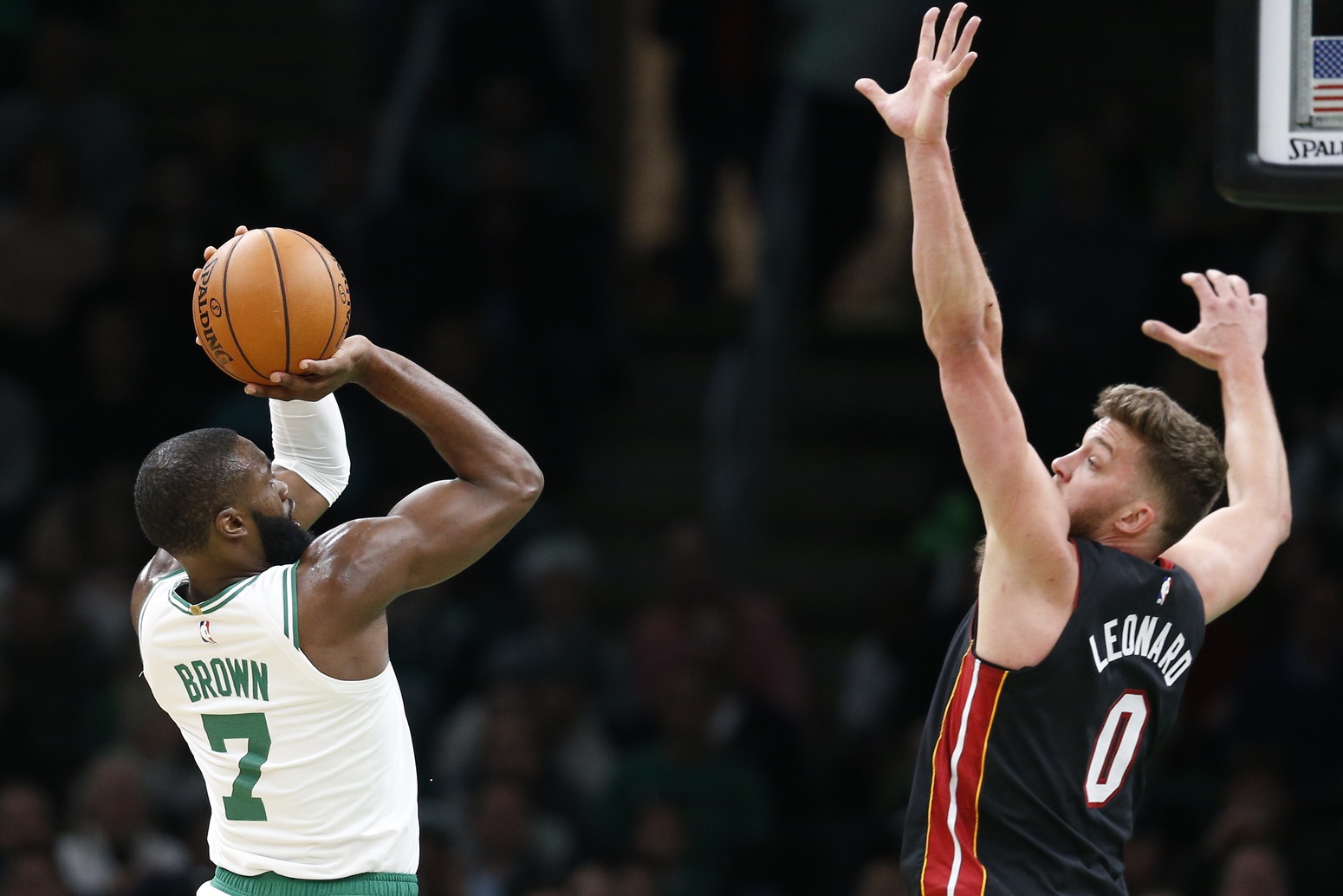 Over the past several years the Miami Heat have played the Boston Celtics pretty well. I figured tonight’d be no exception under the stewardship of Chipotle- and monomania-fueled Jimmy Butler…until it REALLY was.

Boston played about 2.75 quarters of excellent basketball after a slow, grotesque start. Jaylen Brown almost tied his career high with a remarkable 31-point, 50% FG performance, and Kemba Walker wasn’t far behind (an extremely well-rounded 28-4-7-2-1 box score; also he was excellent even when his teammates were starting slow). On the Miami side, Butler’s massive 37-point attack didn’t make up for the remaining roster’s anemia.

The first quarter can best be summed up as follows:

Another slow start for the Celtics, except this time it felt like it had a lot to do with the other team.

Celtics all over the place lmao

Not great. Offense was especially tepid; defense only slightly better. The following clip is about as good as it got:

Kemba with the steal and nice backwards pass to Jaylen who finishes with the bucket pic.twitter.com/EnGrU2MpYb

Things didn’t improve for the first half of Q2:

The Celtics look like they showed up at 7:15 and missed warmups.

We did get this rad defensive move by Carsen Edwards leading to a catch-and-shoot trey by Kemba, tho:

Boston tightened up its defense in the frame’s latter half, highlighted by aggressive deflections and forced turnovers. Walker and Tatum kept the scoring alive—particularly the former, who jumped from 8 to 17 points between quarters and stole the Heat’s lead.

By Q3 the Celtics weren’t in any way similar to the team that had started the game. As Tatum slowed down, Walker stayed on an even keel and Jaylen Brown decided to HURRY THE F**K UP:

Kemba to Jayson to Jaylen pic.twitter.com/pTN4gthO34

A 😘 from Jaylen to the Miami Heat bench 🤣 pic.twitter.com/MjpLSs5qba

Butler was always going to heat back up (after going way cold in Q2), and did, but it didn’t seriously jeopardize the Celtics’ lead until very late in the frame. Even then, he had almost zero support.

Boston didn’t relent, keeping the lead on Miami at around 15 and at times jacking it up to 20 behind Brown, Walker, Tatum and a well-balanced bench attack.

Assorted ephemera from the rest of the night:

This is such an impressive win for the Celtics. This was the second game of a back to back for the Heat and they don’t have their coach but they’re still a very good, deep team. I certainly didn’t expect a blow out like this, especially considering Hayward and Smart are out.