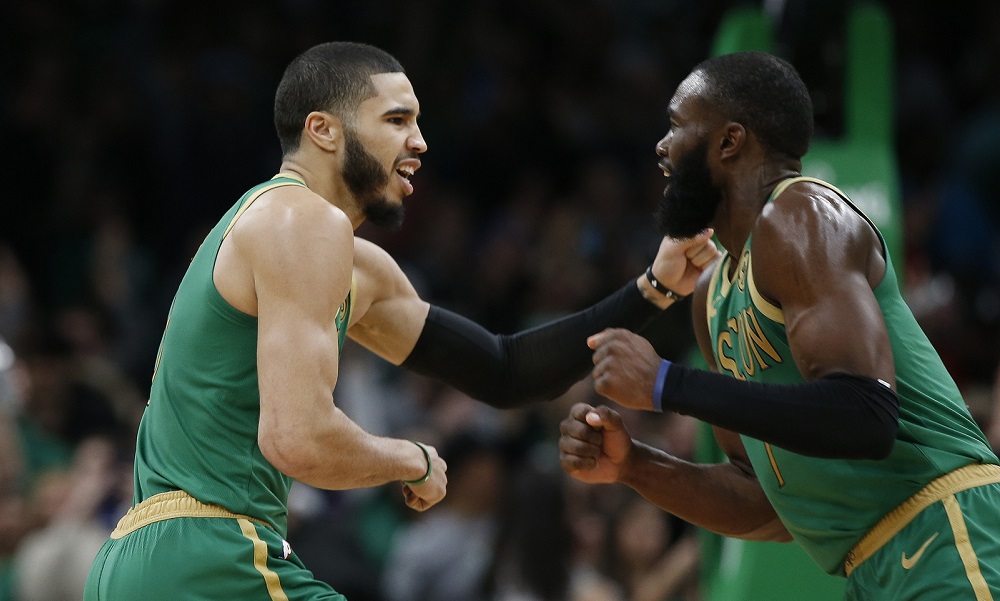 “It feels good,” said Marcus Smart, the longest-tenured Celtic. “I think everybody sees the steps that they’ve taken towards becoming better basketball players, and it shows.”

It especially showed in a pivotal third quarter stretch against Denver where Boston’s lead ballooned from nine to 21 in a heartbeat. On back to back plays, Tatum found Brown for a vicious dunk in transition, and then hit a step-back 3-pointer that sent him skipping down the sidelines in celebration.

“I guess we feed off each other,” Brown said. “Kind of different games, kind of opposite, but it makes sense, like Fire and Ice. We just try to come out and be aggressive.”

Yesterday Adrian Wojnarowski reported that the Cavs are ready to listen to trade offers for Kevin Love. If you read or hear anyone talking about the Celtics being interested, feel free to laugh in their faces.

Yeah, at one time we all lusted for Love’s potent rebounding and three-point shooting, but that ship has sailed. If Ainge didn’t trade the Jays for the likes of Kawhi Leonard and Paul George, he’s definitely not doing it for a 31-year-old power forward who has three years and $90 million remaining on his contract.

And as our friend John Karalis explains in his MassLive piece, now we’re seeing exactly why Ainge wouldn’t part with his young forward duo. They’re looking like the NBA’s next generation of Kawhi and PG-13.

One-quarter of the way into this season, Tatum is averaging 21.2 points per game and Brown is averaging 20.0, for a team that’s 16-5 and second in the East. They are fulfilling their potential right before our eyes, and the evidence has crystallized during the Celtics’ current three-game win streak.

Jaylen Brown has shot 50% or higher in six straight games.

Jayson Tatum is playing at a comically high level over the Celtics's last 4 games, averaging:

The all world Marcus Smart is holding opposing players to 36.8% from the floor.

We're more than a quarter of the way through the season, and the possibility of both Jaylen Brown and Jayson Tatum being All-Stars is quite real.

Right now, Kemba Walker leads Boston with 21.8 PPG, and the soon-to-return Gordon Hayward adds 18.9 per night. That’s 82 points per game from essentially four 20-PPG scorers. No other team in the league has that much firepower with such balance.

There’s a long way to go before the playoffs, and the team has plenty still to prove. But it’s fair to be very excited about 1) just how much these Celtics might achieve, and 2) the blindingly bright future of their two young studs.

The Athletic: ‘That’s a huge compliment’: Jayson Tatum passes another test in his journey to becoming an All-Star

Boston Sports Journal: Robb: Celtics’ path towards contention may be ahead of schedule

Liam Green posted an entertaining recap of last night’s beatdown of Denver, but there were so many highlights, here’s another look.

Jayson Tatum with too much sauce 🍝 pic.twitter.com/RqF849bT32

We had the one-two punch from Jaylen Brown and Jayson Tatum tonight to help us nab a victory over the Nuggets. pic.twitter.com/QGSYulayqg

On Jaylen’s fast-break jam, Celtics owner Wyc Grousbeck leapt from his seat, pumping his fist to lead the cheers. Wyc didn’t enjoy last season. We can report that he is enjoying this one.

Stevens when asked about Boston teams being undefeated at home:

Brad really gets the Boston sports fan. Last season we were miserable watching an unlikeable squad trudge through a season from hell. After that, many of us begged for a team we could cherish, like the Isaiah Thomas overachievers of 2017 and the Hospital Celtics of 2018.

The current version appears to be just that. We like them and they like each other. The wins are following, and right now life is good in Celtics Nation.