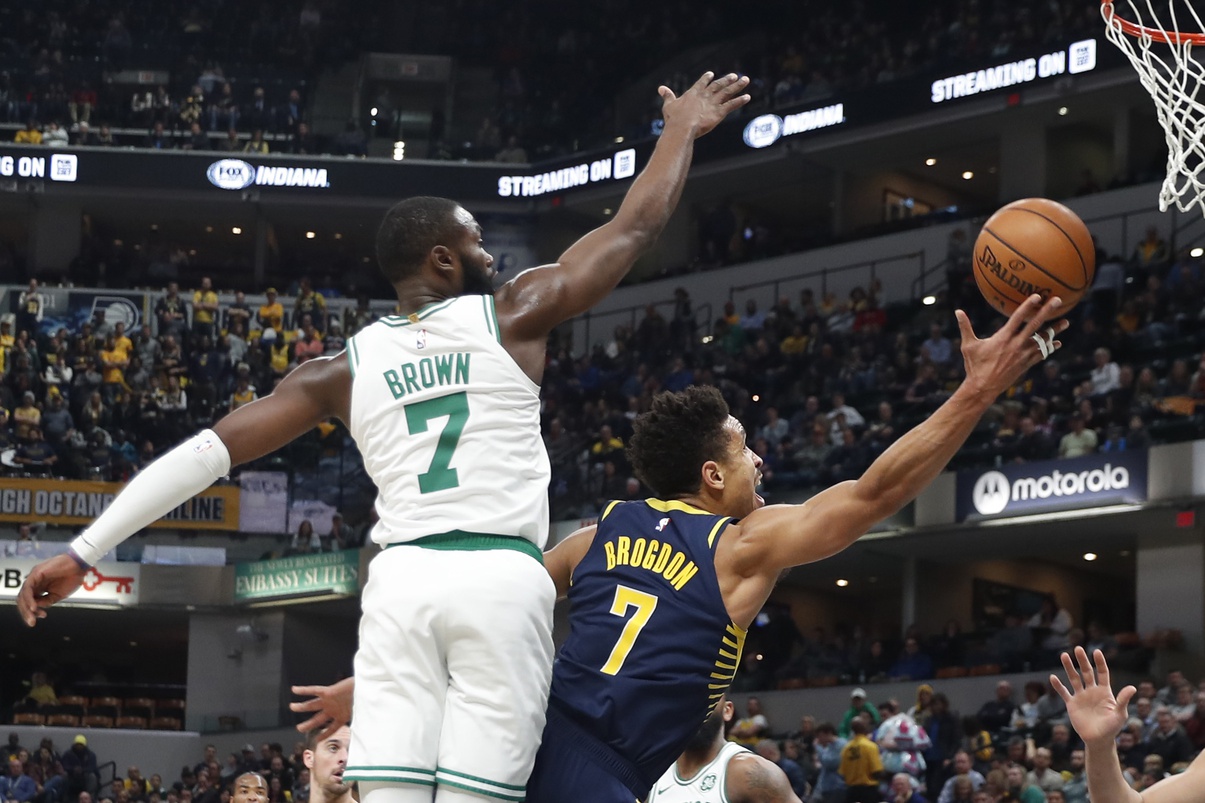 What an infuriating game. What an ignominious end to a contest featuring an absolute gem by Kemba Walker (44 points on 57%, plus 3 boards, 7 dimes and 2 steals) and a sneaky-good Jaylen Brown performance (18-8-8-1 on 58%).

The Pacers played well for much of the game with a balance across their lineups that Boston couldn’t match (and barely defended). In the absence of rehabbing star Victor Oladipo, Malcolm Brogdon and Domantas Sabonis have been outstanding, and they did plenty of damage Boston couldn’t contain (29-2-8 and 15-14-8, respectively), even without counting the officiating disparity, which we’ll cover in 5 thoughts tomorrow. Ultimately, to quote The Irishman, “It’s what it is.” Boston dug much of their own grave in the 117-122 loss.

And to make it all that much crappier, Gordon Hayward took a blow to the face from Doug McDermott (a.k.a. The Poorest Man on Earth’s Gordon Hayward, if the poorest man on Earth is also eating methamphetamine shards) and was experiencing symptoms that sound vaguely concussion-esque. Grand, just grand.

The Celtics started off by blitzing jumpers and triples…

too easy for JT pic.twitter.com/M7UQXcwyXe

But they weren’t defending well at all, the Pacers matching them basically shot for shot aside from some slippage that became an 8-point Celtics lead. Seemed like the game overall might be an even-Steven affair. Then…

The lead is now only 2, but Kanter was actually not the biggest problem on the floor for it. Pacers guards really missed opportunities to attack him. Transition defense & poor shot selection by the C's was the bigger problem leading to Indy's end of quarter run https://t.co/N3sgJwEr2A

Things did not improve, to say the least. The absence of Marcus Smart and Robert Williams meant defensive issues were all but guaranteed, I just didn’t think it’d be this bad. (Rob is no perfect defender but probably could’ve kept up with Sabonis; Enes Kanter simply cannot.)

Some really lazy defense and bad fouls from the Celtics in the second quarter. Just giving away points 50 feet from the basket.

Not smart fouls by the C's in transition in the penalty.

Haven’t had any rhythm since the end of the first quarter. This is rough

One of the worst Celtics quarters in a while. https://t.co/reiSBO8r9B

This all culminated in a devastating 18-2 Pacers run. As Literal Celtics Fan Till He Dies and Beyond Mike Dynon notes below, there was some buffoonery on the officiating front, including a groaner against Daniel Theis that compounded into a sillier tech…

More than that, many calls on Boston are touch or phantom fouls, extremely suspect. Anything questionable has gone Indy's way. Theis especially has been screwed over.

But Boston didn’t exactly help its case by being Very Bad. Recovering somewhat due to Kemba Walker’s near-Herculean effort (24 points in two frames!), they narrowed a double digit lead to a 57-61 deficit at the half.

Kemba maintained his hot streak but was disadvantaged by being Boston’s only real scorer as opposed to Indiana’s balanced Brogdon-Warren-Sabonis attack. That said, players like Brown made up for low-ish point totals with other pluses…

Indy scoreboard had a big get loud meter going for the entirety of Jaylen's trip to the line and there was zero response from the crowd. They completely ignored it

Kemba is having one of those special games tonight for the #Celtics, seemingly getting to wherever he wants to, when he wants to get there. He already has 34 points and we're not even halfway through the third quarter.

(It helps Kemba that one thing Indiana can’t do at all sans Oladipo is defend pick-and-roll well.)

Once Jayson and Jaylen started scoring at a clip more resembling their usual level of quality, the game transformed (shocker, I know), and then it was Boston holding the reins of a double-digit lead.

Quick scan of the box score shows Jaylen Brown is 2 assists and 3 rebounds shy of a triple double.

Then Aaron freaking Holiday of all people had to get hot and throw everything out of whack again. Malcolm Brogdon got to the line about 86,000 times. And there’s the Hayward/McDermott foul kerfuffle, Jaylen fouling out, the missed call on Wanamaker’s layup…UGH.

Kemba finishes with 44 and Celts lose by 5. The math checks out, dammit. https://t.co/Q7C1wlzH3i