Your Morning Dump… Where, at last, it was Tacko Time at the Garden! 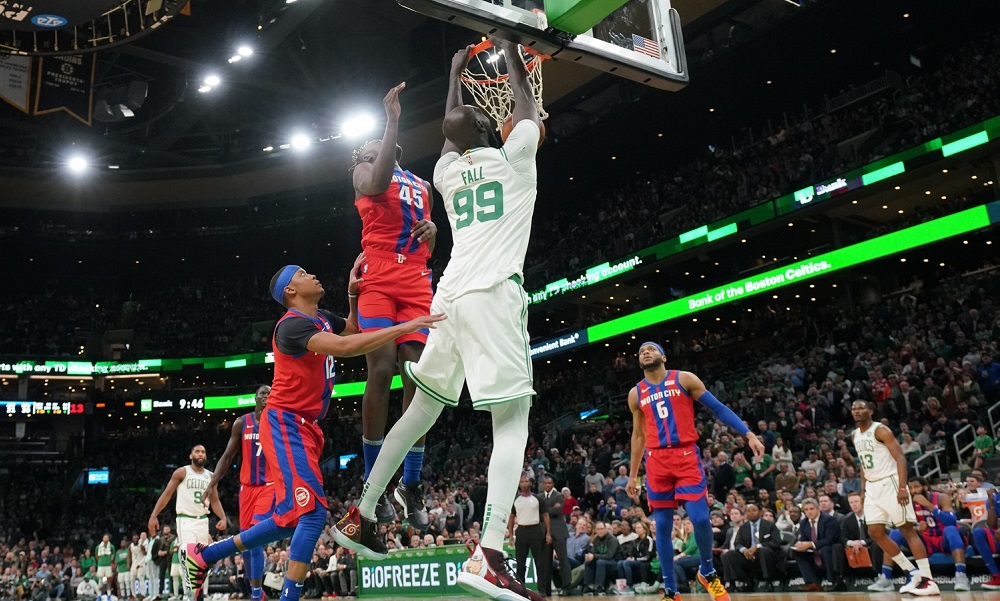 Your Morning Dump… Where, at last, it was Tacko Time at the Garden!

The crowd wanting Tacko Time is one thing. The united voices of 20,000 people sound the same every game, but each crowd is its own unique mix of people who, mostly, might be at the one game they’ll see live all year. They all want in on the fun. They want to be part of the chants like the last bunch of people. They want to be the ones posting video of Tacko being pulled off the bench to their Instagram stories.

The guys on the bench, though, get to see it every day, but that does nothing to sap their enthusiasm for the moment. Robert Williams was egging the crowd on, too. When Fall checked in, the bench stood for the rest of the game just like everyone in the crowd. When Fall dunked, they cheered just as hard as anyone.

“Says a lot about the team we have this year, everyone pulling for each other, everybody is happy for everybody’s success,” Fall said. “That means a lot for me that people want to see me do good, from the people who work in the facility to the front office, players, everybody.”

MassLive: Brad Stevens’ daughter sums up Boston Celtics fans feelings on Tacko Fall: ‘It’s time to give the people what they want.’

The Garden crowd was electric for much of the second half, not just for the big Celtics lead but because it opened up the possibility of Tacko Fall playing time. Brad Stevens relented to the crowd’s wishes with just under six minutes remaining and the big man delivered once he took the floor, finishing with a career-high five points in his second-ever NBA game. The energy in the Garden felt like a playoff game in the final few minutes of the quarter as most fans stood the entire time Fall was on the floor while going crazy every time he touched the ball or scored.

We thought the Timelord phenomenon of last season was as wild as wild can be. Robert Williams rose to cult status before he had even played a game.

Turns out that was nothing compared to the mania of Tacko Time. There’s something about a player being 7-and-a-half-feet tall that makes Celtics fans completely flip out. Tacko made his home debut last night with 5 points, 2 rebounds and 1 block in 4 minutes, and the Garden was rocking for him.

Tacko has now played in two games (the first was at New York in October) and is averaging 4.1 minutes, 4.5 points and 2.5 rebounds. Against Detroit he was effective in garbage time – except when he tried to dribble up the court and ended up on his back, minus the ball. But that was his only slip-up.

There have been ultra-tall players before Tacko. The tallest were Manute Bol and Gheorghe Muresan, both 7-foot-7 and productive. Manute averaged 3.3 blocked shots in his 11-year career and could make an occasional three. Gheorge scored a hair under 10 points per game during his six seasons. Fans were intrigued by them, but there wasn’t the over-the-top reactions that we’re seeing for Tacko.

Will Tacko make it in the NBA or will he be a short-term curiosity? We can only wait and see. Tacko isn’t quick or fluid, so we have to wonder if he can develop enough moves to score against most NBA centers. At that level, there are plenty of big men who are almost as tall that do have quickness.

The fans’ embrace of Tacko is amazing, and it seems to be in a positive spirit, unlike for our previous most wildly popular end-of-the-bench guy, Brian Scalabrine. The White Mamba was a human victory cigar, playing mainly at the end of blowouts. When fans went crazy over Scal making a shot, it often seemed to come across in a mocking way. That was unfortunate.

But Scal played 11 years, won a ring, and now has a TV gig, a national radio program, and a signature red sauce. Being a cult hero paid off.

We’re all rooting for Tacko to have the same success, on and off the court. There must be a taco company somewhere that needs a spokesperson.

On Page 2: Watching the future

Jayson Tatum on playing with Jaylen Brown: "Hopefully, we continue to play with each other for a very long time. But right now, we stay in the moment."

Call them Fire and Ice, call them The Jays, but also call them perhaps the most dynamic and promising pair of young wings in the NBA.

Last night, Jayson Tatum had 26 points on 10-of-17 shooting, with 2-of-7 threes, and 5 rebounds, 3 assists and 2 steals. Jaylen Brown shot 9-of-13, with 4-of-7 threes, plus 5 rebounds, 5 assists, 3 steals and a block. Jayson propelled the Celtics to a fast start with 13 first-quarter points, and Jaylen took over the second frame with 15 points.

Both of them also had their share of eye-popping plays, including this sequence by Jaylen that was the turning point in the win.

In short, Fire and Ice were a dominant duo. It was the tandem performance we’ve been waiting for, where both were scoring at will and leading Boston to an easy win. Yes, it was against the Pistons (4-10 on the road), who were missing starters due to injury, but so were the Celtics. What really matters is that The Jays and the Cs all produced a W.

The hard part now is for them to churn out highlights like these every night.

And, finally… Today in goofiness

.@Grant2Will and Javonte Green are big fans of @jaytatum0… and they now have autographs to prove it! "Can I finish my food first?" 🤣 😂 pic.twitter.com/svo4oAzic0

Grant Williams: "This is just a goofy team. We enjoy each other. We're having a good time. It's fun to win, but it's also fun to compete with guys that you now are going to play their butts off for you every single night."

The Athletic: Tacko Fall mania overtakes Celtics as Brad Stevens decides ‘it’s time to give the people what they want’

Hall of Very Good 6m ago