Your Morning Dump...Where the Jays are looking to run the show in Boston for a very long time 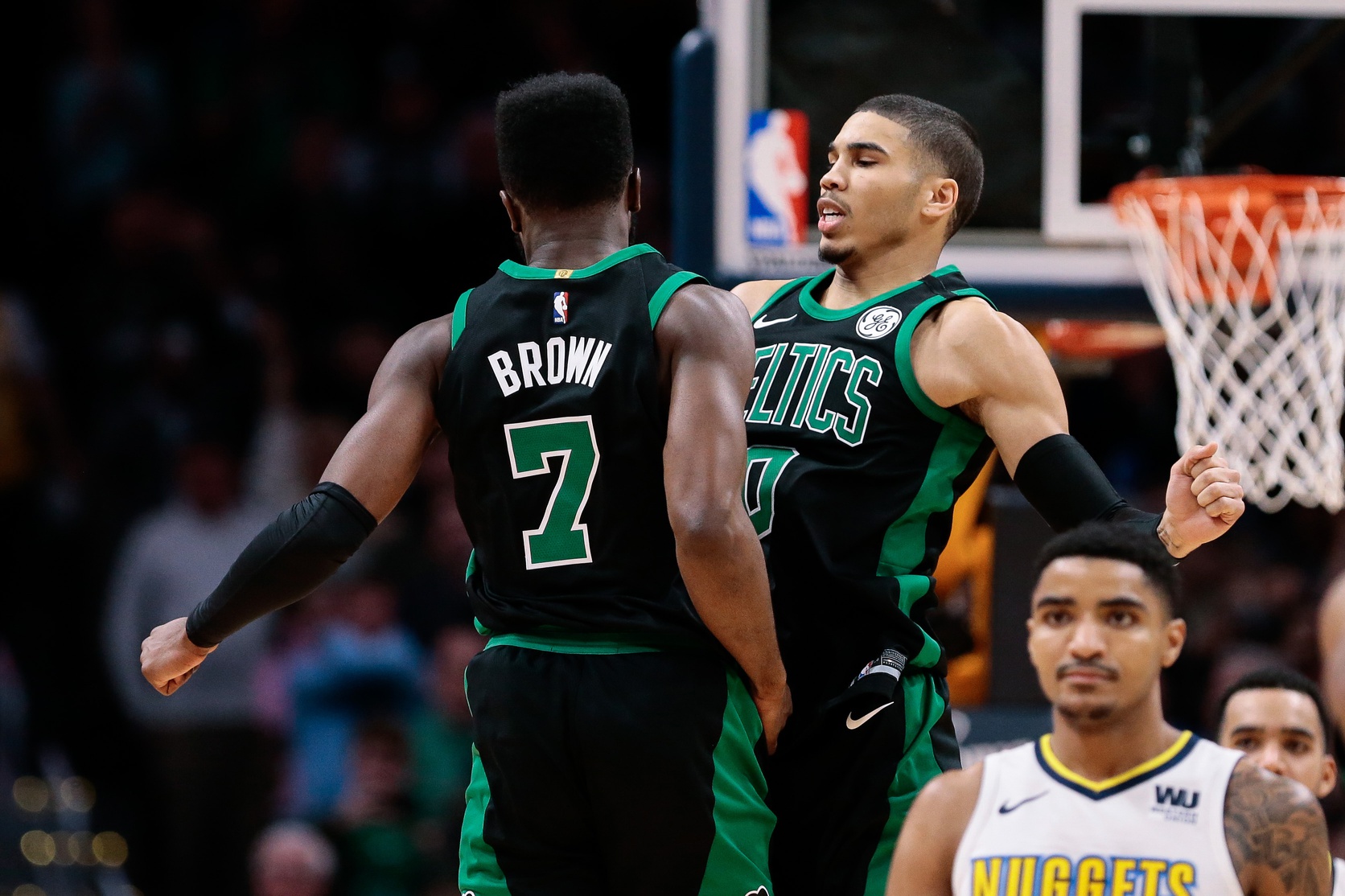 Your Morning Dump...Where the Jays are looking to run the show in Boston for a very long time

When Kyrie Irving, Al Horford, Marcus Morris, Aron Baynes, and Terry Rozier walked out the door this past summer, there was an aura of uncertainty over the Celtics. While they were able to snag Kemba Walker and had a seemingly 100% healthy Gordon Hayward returning, there were still question marks, specifically about the Celtics two young cornerstones: Jaylen Brown and Jayson Tatum.

Tatum and Brown have answered the bell on that front on countless nights during the first two months of the regular season and they did so again on Friday night. With Kemba Walker delivering a dud (2 points, 7 turnovers in 30 minutes) and the C’s already down Marcus Smart and Gordon Hayward due to injury/illness, Boston’s dynamic young duo made sure it didn’t matter. Tatum and Brown teamed up to score 26 points each and shoot a collective 63 percent from the field (19/30 FG) in under 30 minutes each as the Celtics ran away with a 114-93 win against an overmatched Pistons squad.

Needless to say, the two have been absolute dynamite for the green team nearly a third through the season. Coming into this year most would’ve been elated if one of the two got to All-Star level play, let alone both. It’s impressive how consistent they’ve been able to be night in and night out as in the past each was good for a dud every few nights. It’s a testament to the work they’ve put in and their confidence in their ability to get wins.

While there’s no need to continue to harp on last year, it feels like that experience was incredibly valuable to the two of them. Nothing gets handed to you in this league and they had that drilled into their brains last season as they limped to a second-round exit. After having the postseason they did in 2017-18 it’s understandable how they got caught looking ahead in 2018-19. They really weren’t living in the moment and the entire focus of the season was on where they thought they’d end up rather than the task at hand. This season, however, they’ve been locked in and have reaped the benefits of Ws.

Another part of all of this is how each of them has been able to do their thing in different ways.

“We different,” he explained. “You probably can tell he’s stronger than me, more athletic, faster, he can jump higher. But we do a lot of things that are similar. But we’ve been playing with each other for a while, so we just try to feed off of each other. We know what each other can do on the court. So, it’s still a learning experience. Hopefully, we can continue to play with each other for a very long time, but for now, stay in the moment.”

They’ve really been able to gel nicely and play to each other’s strengths. An issue with them in the past was their inability to affect the game on all fronts. Each wasn’t that great of a passer and at times it seemed easy for them to get lost in the shuffle when they weren’t scoring. Both have increased their assist numbers from last season as Jayson sits at 2.8 per night (up from 2.1 last season) while Jaylen is at 2.3 per night (up from 1.4). It doesn’t seem like a humongous improvement by any means, but the fact that they’re constantly developing that part of their games is integral to the Celtics’ success. This team thrives off of ball movement and when your top two scorers are also looking for others, that’s a dangerous combo to deal with.

Their constant activity on the defensive end has been impressive to watch as well. Both are so active in the passing lanes and have really been able to grasp Brad Stevens’ switching defense. They’re able to coordinate things on the fly and have been a pain to deal with when each is defending/rebounding at a high level.

While it’s going to be tough for both of the Jays to make their way onto an All-Star team this season one thing is for certain. We will be seeing these two competing for such accolades together (and hopefully championships) for a very long time in green.

Page 2: Where IT still isn’t taking any guff from anybody

Whilst shooting some free throws, some Philly fans had some words for Isaiah Thomas, and to be frank, he wasn’t amused.

Thomas said a male fan held up both middle fingers and made a ‘‘disrespectful’’ comment — because Thomas did not provide the crowd with a free dessert. The league has rules against a player ‘‘deliberately’’ entering the stands, which is why Thomas was ejected. But Thomas expressed confidence that the NBA would understand his perspective and not issue a suspension…

With 2:53 remaining, the Wizards called a timeout and Thomas left the court to confront the man, who was wearing a red, Ben Simmons jersey.

‘‘I’m never going be disrespected in any way. My dad told me at a young age: Anybody call you [by] name – it doesn’t matter where I am, that’s not going to happen,’’ Thomas said. ‘‘When I missed the first free throw and made the second, I’m running back and the fan has both of his middle fingers up and said ‘F— you, b—-!’ three times. So then the timeout goes and I go in the stands to confront him.

Isaiah Thomas goes into the Philadelphia stands to confront a fan. He was ejected for this.

Another instance where fans being fans rears its ugly head in the NBA. In the past couple of seasons, players have been vocal about some of the comments they hear from fans at the game. While a harmless chant or some trash talk is one thing, this stuff is where things go a little overboard. While they probably were just having too good of a time on the town, this is the stuff that should be left at home. There’s this facade out there that when you’re in the stands nobody can touch you and you can say whatever you want. These guys are all human too and kudos to Isaiah for calmly going over to call them out instead of causing a scene. While the NBA does have rules against going into the stands (aka preventing The Malice at the Palace 2.0), this instance seems like a different story and it should be interesting to see how the NBA deals with it.

Moral of the story is this: Don’t curse out NBA players for a little clout when you’d probably get a knuckle-sandwich if you threw around that type of lingo at them on the street.