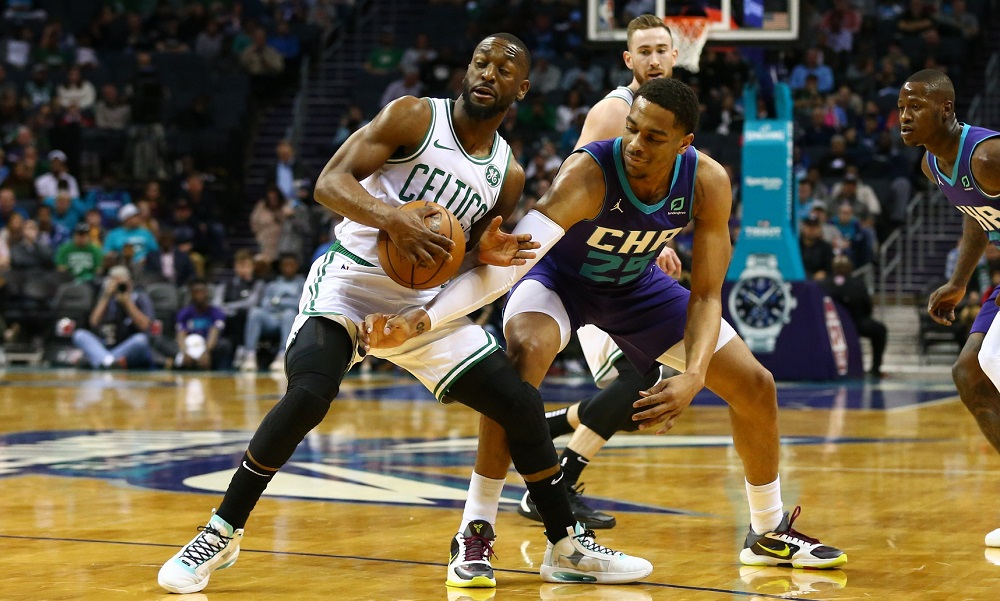 The Celtics closed out the 2010s today by cruising to a 109-92 win over the Hornets at Charlotte. The home team hung around for three quarters, but the Cs were comfortably in control until pulling away in the 4th quarter. Charlotte was held to 39.5% shooting and committed 17 turnovers.

As usual, the Cs were shorthanded: East Player of the Week Jaylen Brown didn’t travel to Charlotte.

#NEBHInjuryReport Brad Stevens says Jaylen Brown has a sinus infection and is feeling better today. He is OUT today in Charlotte and is day-to-day, according to coach.

Marcus Smart will start in place of Jaylen Brown.

Tipoff was at the odd time (for a Tuesday) of 3 p.m., apparently to allow fans extra time to get ready for their New Year’s Eve festivities. Early action:

Easy put down for Tatum 🔨
Vote NOW to get him to All-Star https://t.co/FMwC6YTlFy pic.twitter.com/xoeicHnAj7

Tatum, who scored 22 in the 4th quarter vs. Charlotte nine days ago, was again scorching.

The Celtics took a 28-18 lead in the 2nd quarter as the Hornets were held 5-and-1/2 minutes without a field goal.

Gordon Hayward heated up to help the Celts go ahead by 14. Gordo had 10 points, 4 boards and 3 dimes in the 2nd.

Out of the way 🚜Hayward coming through pic.twitter.com/h8ujtz5ils

But it wasn’t all easy.

Then Kemba scores to kill the run.

Kemba gettin in the 🎨
Don't forget to vote to get him to All-Starhttps://t.co/nvx9pYbkQP pic.twitter.com/1TXR843I7g

Closer at halftime than it probably should’ve been.

But the Hornets rallied back to within 59-55. Now here’s a Marcus Smart story in three parts.

A lot of guys would've just ceded the easy dunk there and moved on. But Smart went strong for the block, committed a hard foul, and Washington missed both FTs.

Tatum for 2️⃣
Get him to All-Star by voting at https://t.co/FMwC6YTlFy pic.twitter.com/HzGVgNM3ne

The Charlotte crowd didn’t much care, however.

Hayward and Kemba each had 7 points in the third, but the Hornets were still hanging around.

Early 4th quarter, Boston ran off 6 straight points, two of the hoops being Kanter putbacks, to lead 86-75. Tatum and Brad Wanamaker drained threes to push the lead to 92-79 with 7:13 remaining. The Celtics continued to make shots, and when Kemba scored a driving and-one the lead was 103-83 with 4:23 to play. Cue garbage time.

Where are all the Enes Kanter haters in my timeline?