What to Expect from the Celtics rookies after the New Year 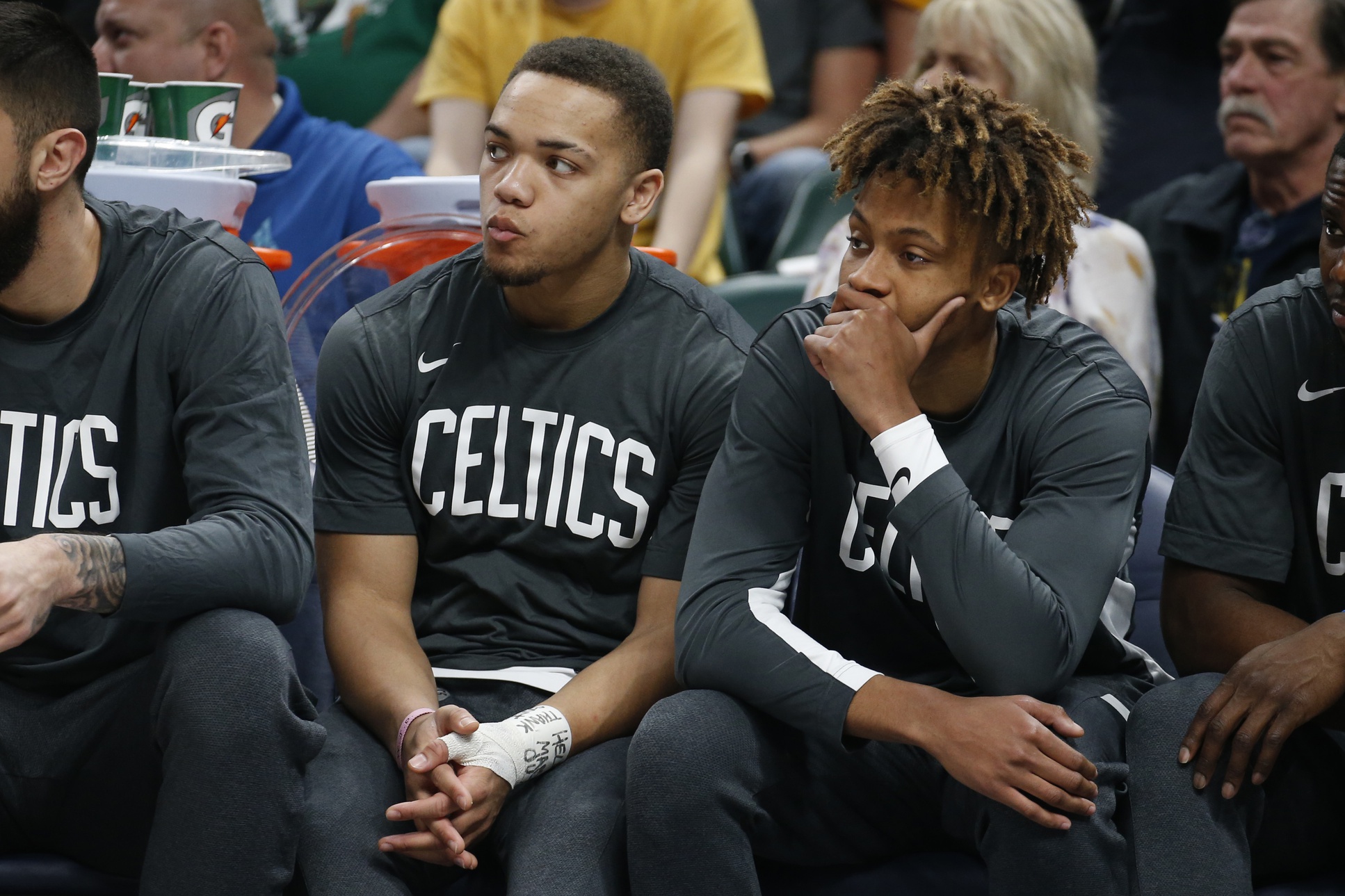 What to Expect from the Celtics rookies after the New Year

Celtic fans must be pretty pleased with the early returns on Danny Ainge’s most recent draft and free agency class, and not just because of fan sensations Tacko Fall and Vincent Poirier.

Although Carsen Edwards has not played particularly well, his expectations may have been too high. Still, Grant Williams has been fundamentally solid, Romeo Langford is more NBA-ready than once thought, and Tremont Waters is garnering all types of buzz from rival executives. Plus, Javonte Green seems ready to play if push comes to shove.

Will the new year bring any new opportunities for our rookies? For some, it may. Others, however, may find themselves wanting for minutes. Let’s go over some predictions.

1. Tremont Waters will get more minutes and deservedly so.

The second-round rookie has been lighting up the G-League and scouts have been taking notice. Keith Smith captured this momentum in a tweet:

Lastly on Tremont Waters from a scout: "I missed on him. Big time. Thought was too small for our league. But he's tough and fast. I don't know what he'll be beyond it, but he's an NBA backup point guard at least. And that's valuable because everyone plays three PGs a night now."

The tape on Waters shows a smart, playmaking guard with excellent feel for the game. Despite having obvious physical limitations, Waters shoots with a quick release, especially after using the dribble to create separation.

His numbers can help project what role he could possibly play on the Celtics. Waters assists on an outstanding 32.4 percent of his teammates’ field goals while on the floor. Serving as a third or fourth guard who runs smooth sets for more experienced shooters seems like a plausible fit.

Additionally, he takes half of his shots from beyond the arc and half of them are unassisted. When the ball is not in his hands Waters can space the court by catching and shooting. Defensively, he will show everyone why he was co-SEC Defensive Player of the Year.

With Edwards struggling to adapt to his NBA role and Brad Wanamaker showing some regression, Waters could be brought in as a replacement. Yet, he can only play 45 games this year unless given a new contract. Keep an eye on this intriguing rookie.

2. Carsen Edwards may spend more time in the G-League.

Considering what was predicted about Waters, this makes sense. Edwards has essentially become a 3 & D guard for the Celtics. Unfortunately, he is not making too many 3-pointers or playing impressive enough defense to justify court time.

The Purdue standout is taking 60.7 percent of his shots from deep despite hitting them at a subpar 33.3 percent clip. Perhaps this number will progress as the seasons continues. It is his finishing at the rim and decision making, however, that gives the most pause.

Want to know a quick way to play yourself into Maine? Take pull-up triples over 7-footers with 15 seconds remaining on the shot clock.

Another way to suddenly find yourself in a G-League uniform is to fire up contested triples instead of hitting an open teammate in front of the basket. Perhaps most alarming about this clip is that Edwards didn’t seem to even glimpse Ene Kanter’s way.

Lastly, Edwards has had trouble finishing at the rim. In fact, he shoots an ugly 30.3 percent there. Finishing against NBA length may simply take some time to get used to.

Lately, Edwards has been playing merely in garbage time. Boston’s brass may find it more appropriate to have him develop in the G-League.

There was a time when some fans were questioning if Williams should be playing with his poor shooting numbers. Was his defensive impact worth the lack of scoring?

Turns out, Williams brings so much more. His effectiveness as a switchy, rim protector in stints as a small-ball center was noted in a previous piece. The team’s numbers when Williams is at this position supports the eye test. They maintain rebounding efficiency, share the ball well and rack up steals often.

The Celtics may have an odd man out when Robert Williams comes back. Or, Brad Stevens will strategically insert Grant Williams as a center when the Cs can benefit from a speedier lineup. Regardless, this is a good problem to have. Trust in Stevens to make the right decision; one which could see Williams get comfortable in his small ball role.

4. Romeo Langford could be stuck in No-Man’s land.

Despite being the Celtics first draft selection last year, Langford has not received as much hype as his fellow rookies. This trend is starting to change, however.

When both Gordon Hayward and Marcus Smart were down with injuries, Langford was called upon for his first meaningful professional contributions. What’s more, he delivered by making hustle plays and demonstrating defensive awareness uncommon among first-year players.

For example, Langford has caught on to how NBA players must position their body while on the court. If he shuffles his feet against Terry Rozier, then he probably gets burnt to the hoop. Instead, Langford opts to rotate the hips and run side-by-side with Rozier before causing the miss.

It appears Langford has focused on this particular defensive skill. In most situations, it would earn a young wing more minutes. Yet, the return of Hayward and Smart will make it extremely difficult for Langford to consistently crack the rotation. Expect Langford to toggle between Maine and Boston while staying ready to fill in for an injured player.

5. What to do with Green, Poirier, and Tacko?

The French center has been the only frustrating player in this bunch. Some believed Poirier could play significant minutes for the Cs this season. Alas, injuries have slowed down the rookie.

Although Boston is a candidate to stay idle during trade season, Poirier is one name that could be moved. His two-year contract is inexpensive and teams may want to roll the dice on a player who the jury is still out on. Attaching a second-round pick to Poirier for depth at either wing or center may be an option.

Breath, Celtics fans. Tacko Fall will likely stay put although you may have to check out some G-League games to watch him. Fall is essentially a last resort big man.

This brings us to Javonte Green. The bouncy wing has played in a surprising amount of games for the Celtics. Regardless, Green hardly sees more than one stint of playing time per game.

According to A. Sherrod Blakely, Green’s contract does not become fully guaranteed until next month. With no rumors circulating about Boston wanting an open roster spot, any movement on Green would come as a shock. Yet, expect the unexpected with Ainge. Additionally, if Green is waived then it may signal that the Celtics could be players in the buyout market.