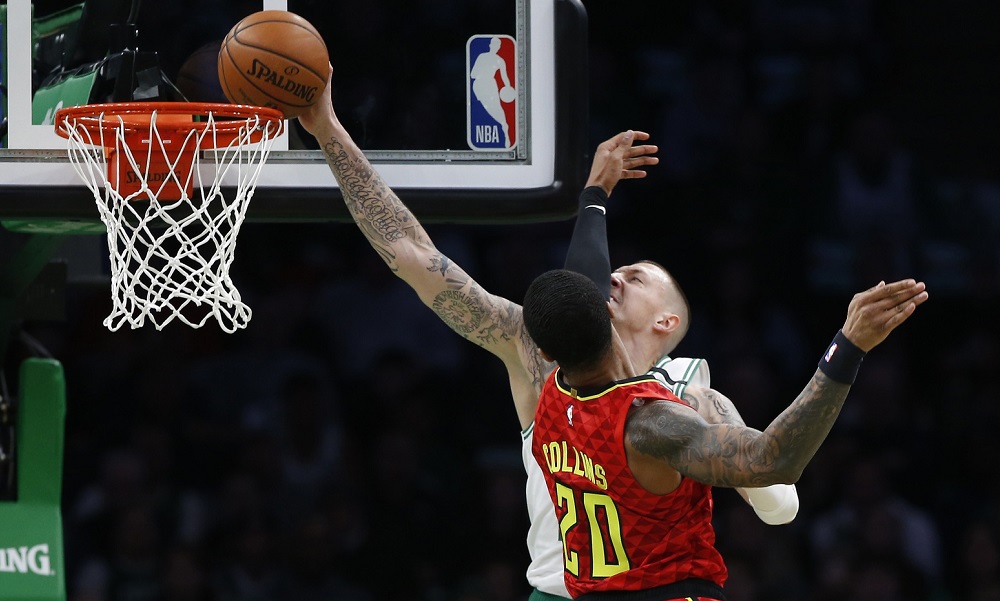 Daniel Theis stays in front and comes up with the game-sealing block for the @celtics. #Celtics pic.twitter.com/NFm3U0rKVY

“I knew we were up two,” Theis explained. “As soon as I switched on him, I knew he wanted to take the three to win the game, because he made a bunch in the game.”

Young had made five to that point. He wanted a sixth, and he tried to clear some space by seemingly attacking the basket.

“He crossed over, he probably would have beat me for a layup,” Theis said. “I was expecting him to go for the game-winner, to shoot the 3. So just be close. If he beats me to the rim, makes the layup, worst case we go to overtime.”

“That’s a big-time basketball play,” Brad Stevens said. “It sounds easy when we sit here and talk about it, but in the throes of the game and knowing Trae is capable of getting to the rim on anybody, that’s a huge, huge play.”

MassLive: Daniel Theis made his game-saving block on Trae Young because Theis knew ’he just wanted the game winner’

One thing Boston fans always appreciate is the athlete who overachieves. And Daniel Theis fits that description this year, to say the least.

These numbers may not stand out, but they are everything you’d hope for from a guy who starts out of necessity. And last night, Theis exceeded his averages while splitting the 48 minutes for the center position nearly evenly with Kanter.

Kanter and Theis were outstanding, teaming up for 17 total rebounds while contributing 14 points and two blocks apiece. There’s a lot of talk about the frontcourt being a glaring weakness for Boston, and while there’s some truth to that statement, this duo has been really impressive as of late.

Theis’ game-winning block rightly got all the attention, but the big German also swatted Young a minute earlier at another crucial moment, a potential game-tying layup with 1:14 to play.

The performance was timely because there were rumors yesterday that the Celtics might want to trade for Detroit center Andre Drummond. Some Boston fans/media think the Cs need an upgrade in the middle. Whether or not Drummond would actually be an upgrade – and worth the price tag – is open for debate.

Without touching Hayward, the only other way to make a move for Drummond would be decimating the C’s bench. Marcus Smart ($12.5 million) would be a starting point in terms of salary while Enes Kanter and Vincent Poirier would lead to another $7.2 million. From there, the C’s would still have to find another few million dollars to throw in from their rookies or low roster pieces, which would be very tough to do without dismantling the bench. The Pistons also don’t have open roster spots to make such a lopsided deal work.

Would you take Drummond over Kanter if the money was equal? Of course. However, Kanter is making less than 20 percent of Drummond’s salary this year and that’s a huge deal when you are looking at the C’s financial structure. Kanter is essentially the same kind of elite rebounder that Drummond is and while the Pistons big man is the far better rim protector, he has many of the same weaknesses that Kanter holds when it comes to defending the pick-and-roll or switches on the perimeter.

Boston Sports Journal: Why the Celtics won’t be trading for Andre Drummond

The Celtics are fine as is. They have the chemistry and the talent to succeed. They are 24-8 and second in the East. Why mess with that? For the regular season, they can roll with Theis and Kanter in the middle (and sometimes Grant Williams plus Robert Williams when he’s healthy).

“We believe in Theis,” Smart said. “Defensively and offensively, Theis has been doing big things and making big-time plays for us.”

The Athletic: 13 takeaways from a night when Daniel Theis saved the game and showed his value

Perhaps Boston will need another big for the playoffs, but that’s what the buyout market is for. The challenge is to find a free agent who’s more P.J. Brown than Greg Monroe. But whoever they get will not require adding a huge salary or breaking up the successful core that, due to injuries, has not yet played together enough and still has room to get better.

In the meantime, please enjoy what Theis is giving the team. Danke.

On Page 2: The Full Smart

Marcus Smart had his entire game on display last night – the winning plays, the clutch shot, the skirmish, getting under the skin of everybody on the other side. The Hawks poked the bear and, to mix a metaphor, Smart came back at them in wounded coyote mode. He finished with 15 points, 6 rebounds, 9 assists, and the last word. It played out like this:

Atlanta went ahead big early, and then Trae Young got an and-one call that looked like a bad whistle on Smart.

Admire the beauty of Trae Young going into a crossover right when Smart top blocks him because he knows he can both protect the ball from a swipe from behind and launch himself into Smart to draw the foul. pic.twitter.com/1bLOzMtEYF

Smart got his revenge in the final minute.

Then he made one last statement (and got away with it).

Marcus Smart was about to step over Trae Young as the game ended, and things got heated in Boston. pic.twitter.com/kzA8p6Dlgf

Smart: “He probably did. I got mad at him when he elbowed me in my face too so there we go.”

The Atlanta announcers, fans and media weren’t happy, at all. Here’s one printable reaction.

The refs did not call Marcus Smart for a technical foul here. Speechless. pic.twitter.com/2EBXxv8WWc

But this random tweeter hit the nail on the head.

Everyone hates a guy like Marcus Smart til their team has one. You love it when it's one of your own

I’ve been saying, parts of @smart_MS3 game reminds me so much of Dennis Johnson.

This is a exactly what I’ve been talking about over and over. DJ would totally drain this shot, even if he was 0-10 through 47 mins. #celtics pic.twitter.com/d0emnE71BX

The late Dennis Johnson, no. 3 in the Garden rafters, is a Hall of Famer and one of the most competitive, clutch dudes in NBA history. DJ once unbelievably shot 0-for-14 in a Finals Game 7 that his team, Seattle, lost by 6 points to Washington. That could destroy some players, but the following year the teams had a rematch, and DJ won a ring and earned Finals MVP. That’s as tough-minded as it gets.

There’s only current Celtic with the potential to have a bio like that, and he wears no. 36.

Related – MassLive: Boston Celtics’ Marcus Smart talks dust-up with Trae Young, Alex Len: ’This has got nothing to do with you’

NBC Sports Boston: A big shot, a dust-up, a win — just another night for the Marcus Smart Experience

Globe: Marcus Smart critical on Friday, and for what Celtics have coming

Let’s take a moment to salute Jaylen Brown. On a night when Kemba Walker couldn’t play and Jayson Tatum couldn’t throw it in the ocean from the pier, JB came up huge with a team-high 24 points (8-of-13 shooting), 10 rebounds, 2 assists and 2 steals (plus 6 turnovers, shhh).

Furthermore, when the Cs fell behind early, Jaylen helped start the rally with this hellacious dunk at the end of the first quarter.

The steal ✅
The SLAM 💥 pic.twitter.com/QyLvuDicyT

…Brown’s energy over the last 30 seconds or so of the first quarter actually showed the Celtics had some life after what was, without question, their worst quarter of the season.

“Just tried to turn up the energy a little bit, especially mine,” Brown said. “Just battling. Everybody’s battling and stuff like that. So just trying to dig deep and do what it took to get our team going a little bit and it started on defense and luckily it carried over to a win.”

Last season the Cs would’ve found a way to lose that game. This season is the opposite, and one key is that Jaylen is easily one of the most improved players in the league.

Health and Fitness 26m ago

The Floor Seat 48m ago